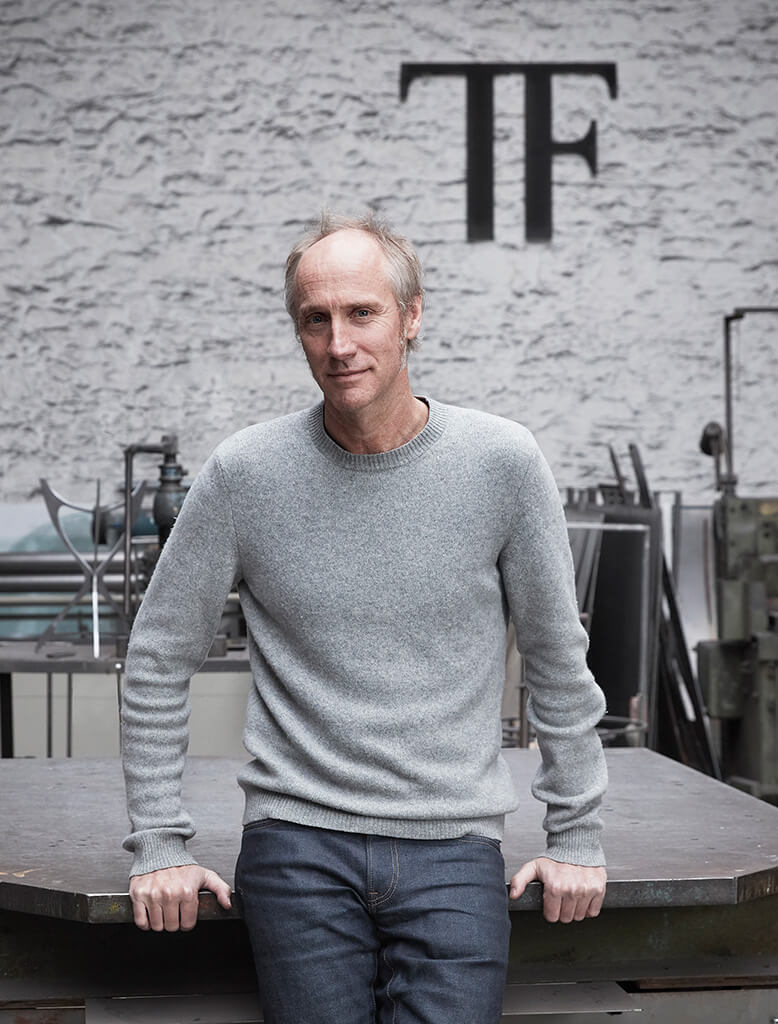 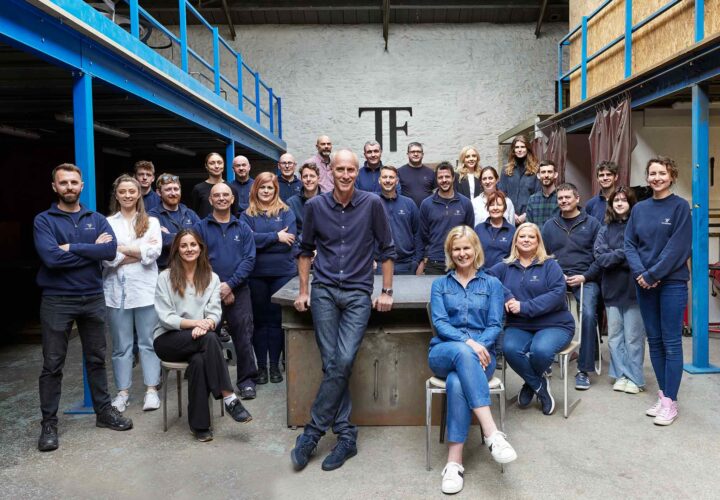 Tom Faulkner is a designer / maker of exquisite furniture and accessories. Tom started “making things”, as he puts it more than 25 years ago, but it was his discovery of metalwork that led him to establish his eponymous brand in 1996.

His design style could be described by a few signature qualities: clean lines, distinctive silhouettes, simplicity, and beautiful materials.

Everything in the Tom Faulkner collection is made by hand in Tom’s own workshop in Wiltshire, UK. The workshop is home to a team of exceptionally skilled and dedicated welders, finishers, painters, and cabinet makers. Several of them have worked for Tom for many years.

In the London showroom there is a friendly and professional team ready to offer guidance through the collection and to give help with size options and finish choices etc. (Everything is made to order, so there can be many decisions to make!)

Loved by private clients and professional interior designers alike, Tom’s pieces are equally at home in contemporary and traditional settings. From workshop to showroom, the company is celebrated for its original and distinctive designs, its superlative workmanship, and its exceptional service.

These values have been the guiding principles since the early days. While the company has grown considerably since then we still do everything we can to extend this ethos to our customers (and our suppliers), with meticulous attention to detail and the best service possible.

Tom is the founder and driving force of the business. Through his twenties, he worked in a range of jobs including a stint in London’s music scene with Chrysalis Records, and crucially, a spell with a London picture framer.

When Tom’s creativity really began to take hold – in the early nineties – it was this time spent framing pictures in a small workshop with a retail premises that really inspired him to start his own business.

It all began with a coffee table, which Tom made for himself to replace a broken one in the house he shared with his sister in south west London. He made it in the kitchen and decorated it in wild patterns using stencils and spray-paint. Impressed by his own ingenuity, he started to sell similar tables to friends and family.

He was still working for Crysalis records but when redundancy struck, he took a deep breath and set off on a new path. “It was a leap in the dark” says Tom. Resourcefulness and resolve prevailed, giving way to Tom Faulkner, the company.

In the early ‘90s Tom discovered metalwork. He designed a chair and found a small forge in Wiltshire who could turn his vision into reality. Metal represented new frontiers for Tom, and he was energised by the formal possibilities it presented. It could be turned and twisted into almost any shape imaginable. It was strong, versatile, and sleek. Galvanised by the potential of this new medium, Tom started to design new tables and dining chairs. There was an immediate reaction to these fresh metal designs and the business started to grow organically, as it has done ever since.

As the company has grown, so too has the workshop, though it has maintained its roots in Wiltshire. Tom’s pieces are crafted in Swindon, in the original railway workshops, which the great British engineer, Isambard Kingdom Brunel built in the 1840s. Nigel Ballamy, Tom’s first employee, still works there to this day.

Metal remains Tom’s first love, but he’s continued to explore the possibilities of form and shape afforded by new materials. He’s introduced bronze and steel combined with other natural materials such as marble, timber, glass, leather, and even plaster. He travels constantly in search of new inspiration, drawing on far-flung influences from Japan to Bauhaus-era Germany. Tom never really stops thinking about design, but away from the workshop and showroom, he can be found travelling, playing guitar, and enjoying quality downtime in Devon.

Tom was joined in 2004 by Miranda Kirwan. With a sales and marketing background, she immediately started to increase sales and grow the business. She is now CEO, and she has played a vital part in the journey of the business. Her command of detail, her tenacity and her creative thinking are huge assets that have been key in ensuring the company continues to delight its customers around the world.

Tom met Nigel Ballamy in the early ’90s.  He was working for the forge in Wiltshire who made Tom’s first metal chairs. Tom knew then, not only that he had found someone special, but also that he had found the material that he wanted to work with. “Metal was an amazing discovery for me,” Tom says, “and Nigel was brilliant in understanding what I was trying to do.” Nigel has stayed with Tom ever since and remains a key part of the Tom Faulkner set-up. He is Chief Engineer and is responsible for bringing  Tom’s new designs to life.