Modernist architecture takes many forms, but it tends to be united by a few common elements. Simplicity, visual purity, and functionality reign supreme. Though, on a deeper level, Modern design taps into a sensibility that exists outside of any particular epoch. It’s a mentality more than a set of design principles, carefully calibrated to improve the way that we live. Form is important, but it’s how we interact with these spaces that really counts – how they shift our daily rhythms and influence our states of mind.

Iconic Modernist villas like Le Corbusier’s Villa Savoye, Ludwig Mies Van Der Rohe’s Villa Tugendhat, and Frank Lloyd Wright’s Fallingwater seem to exist outside of time. They’re capsules of a frame of mind – the Modernist mentality crystalised into form. As the tides and trends of design ebb and flow, we embrace new ideas, but these remain the baseline.

Tom has long been captivated by these places, drawing inspiration from their smart, streamlined atmospheres and the infinitesimal details that make them great. He’s even made the pilgrimage to see it all for himself, reporting back with a few favourites. These three stalwarts are a few of the highlights that he carries with him when he designs, seeping into the form and the feel of everything we produce. 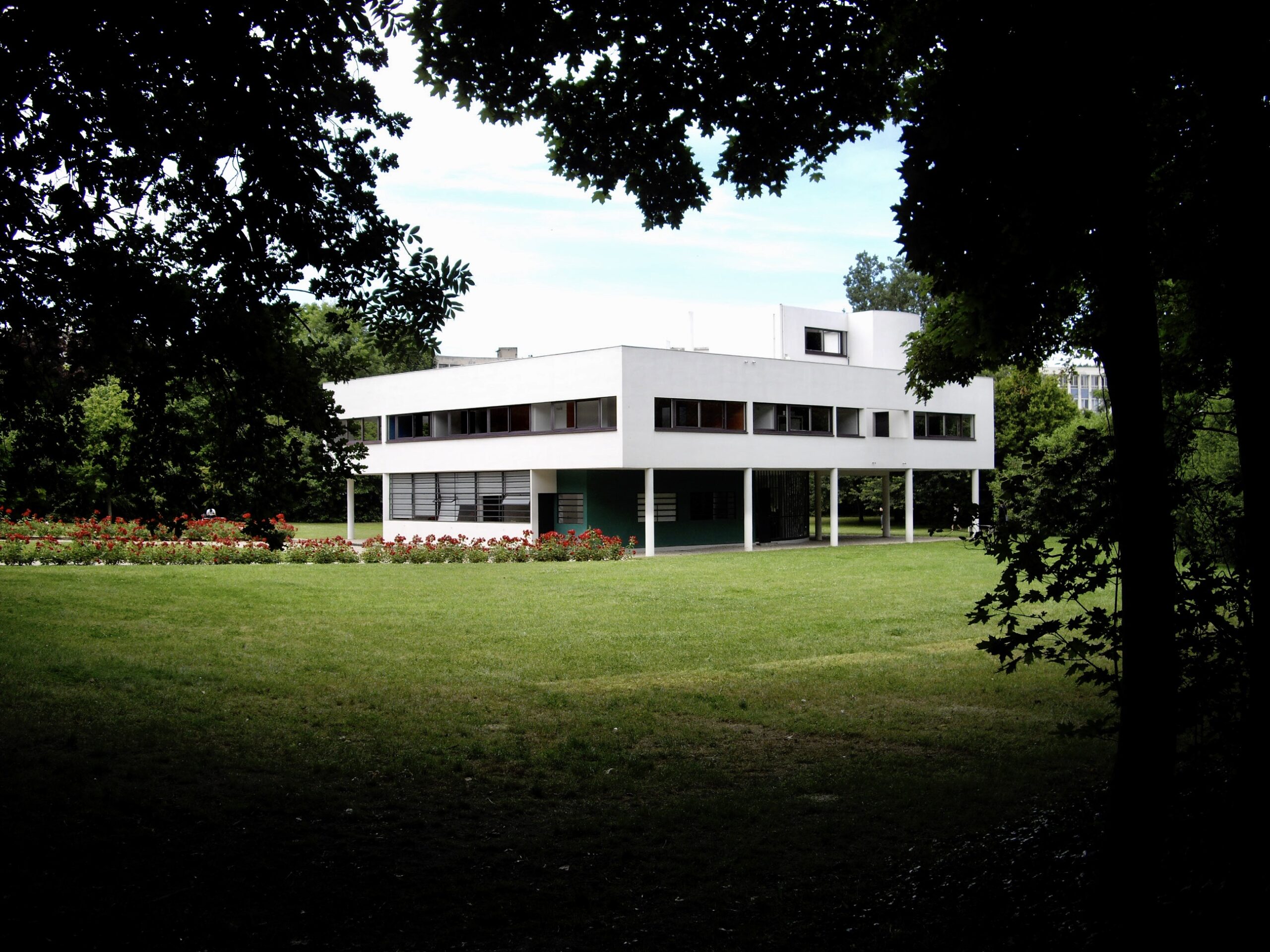 Exterior of Villa Savoye, designed by Le Corbusier; photographed by Tom in 2006

Villa Savoye is, in many ways, the poster child of Modernist architecture. This is a place one learns about in Art History 101. Le Corbusier designed the villa as a country retreat for Parisians, Pierre and Emily Savoye, completing it in 1931. With its stark, geometric façade and innovative approach to engineering, it’s a spectacular representation of the Modernist maestro’s philosophy on architecture. 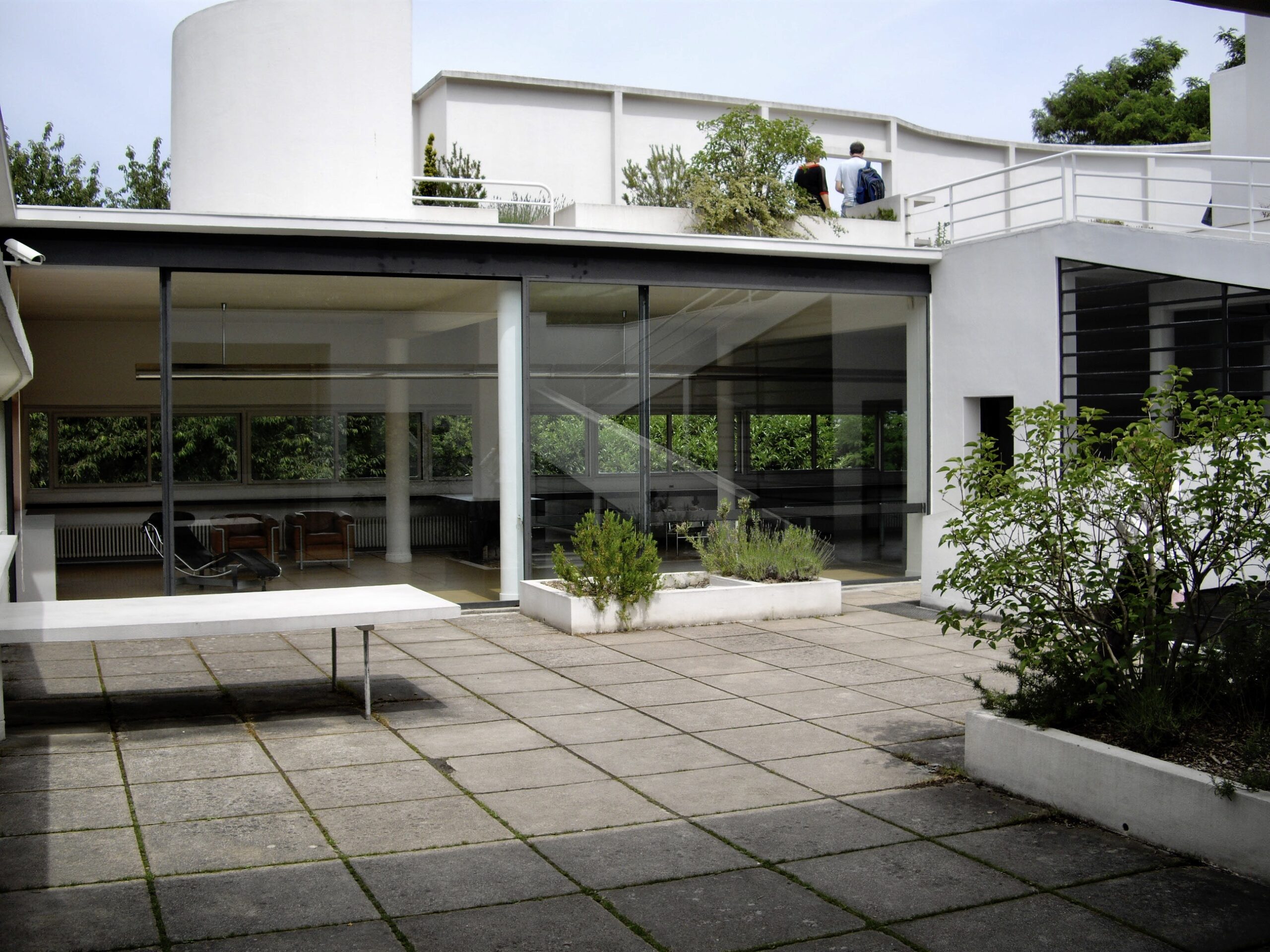 Terrace of Villa Savoye, designed by Le Corbusier; photographed by Tom in 2006

Villa Savoye is, in many ways, a distillation of Le Corbusier’s Five Points of Modern design. It features an open floorplan, ground-level columns, horizontal windows, a rooftop garden, and non-load-bearing outer walls. These culminate in something of a blueprint for the modern house. Many of Le Corbusier’s Five Points depended upon his use of pilotis, stilt-like columns extending from the ground up through the house to support its weight. With these foundation-to-rooftop columns doing the heavy lifting, he was free to place all of the walls as he wished, allowing him greater creative scope. This gave way to an open plan living space and provided the freedom to extend panoramic ribbon windows around the outer walls of the house. These columns also supported the rooftop garden, conceived as a way of giving back the green land which the house occupies, as well as maximising its functional footprint. The use of pilotis also left space beneath the house to be reclaimed as usable surface area. The space was laid out to suit the turning radius of the Savoye’s car, linking the home to this machine age sensibility, with all its accompanying associations of dynamism, progress, and efficiency. 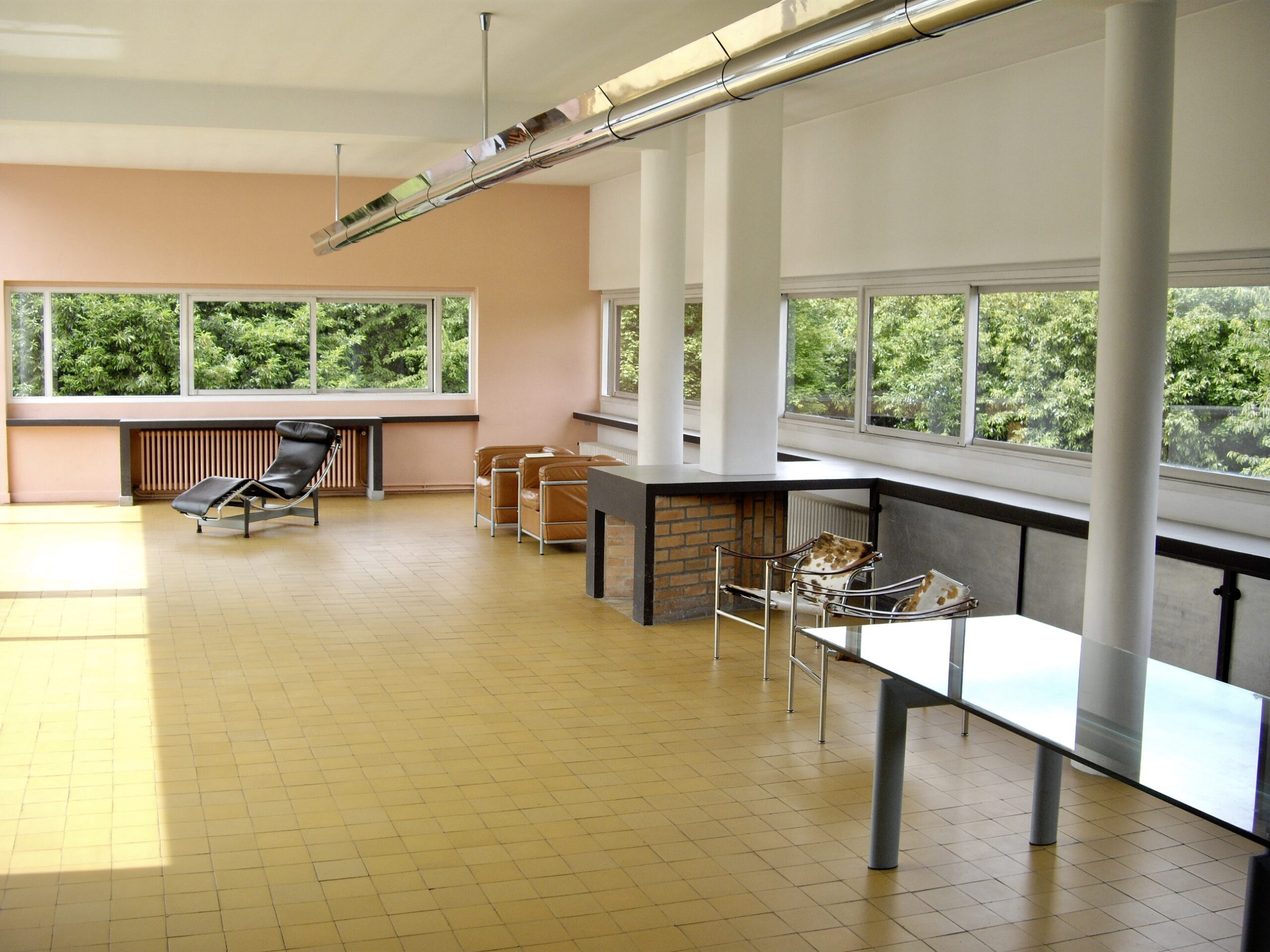 Interior of Villa Savoye, designed by Le Corbusier; photographed by Tom in 2006

Le Corbusier sought to create a seamless approach, from Paris to the suburb of Poissy, beneath the villa, into the garage, and up a ramp leading inside the stripped back concrete shell. He was interested in rituals surrounding the home and designed with an eye to encouraging a few that he viewed as healthy habits. For example, he placed a basin at the main entry so as to suggest cleansing on arrival. The whole experience of approaching and inhabiting Villa Savoye was, in essence, a celebration of a certain purity of form. The aim was to suffuse this quality of uncluttered calmness in those who experience the place, imparting a sense of tranquillity and sufficiency. 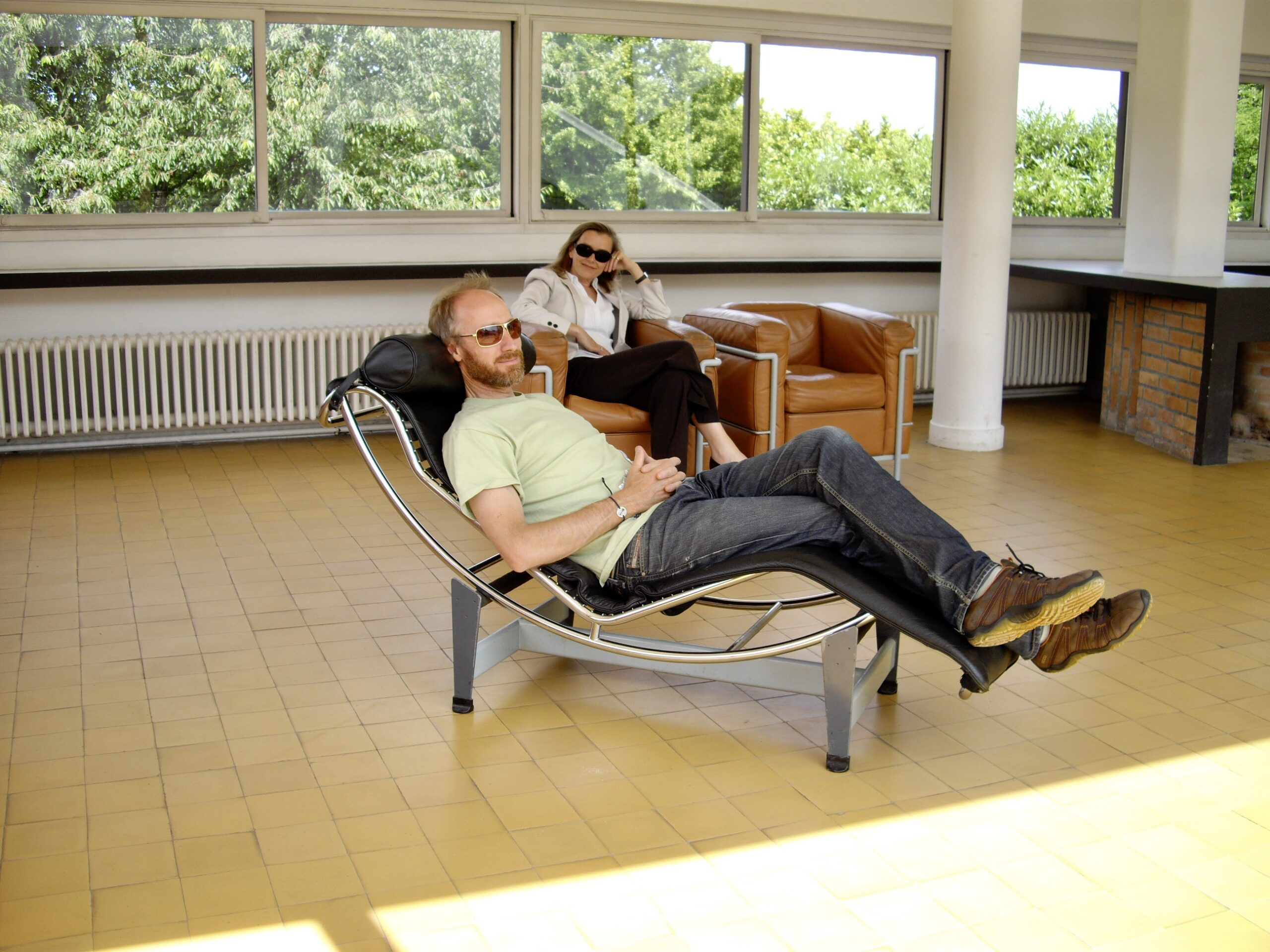 Tom lounging in Villa Savoye in 2006, designed by Le Corbusier

This place is a ‘machine for living’, as Le Corbusier put it, and has come represent more than just an architectural style. It’s an icon of Modernism; so much so that Danish artist, Asmund Havsteen-Mikkelsen created a replica of Villa Savoye and sunk it in a Danish fjord as a declaration against Modernism. You can sink the model, but you can’t sink the mentality. The Modernist sensibility of Villa Savoye continues to permeate design today, resulting in homes that are not only starkly stunning to the eye, but conduits of streamlined, sanguine living. 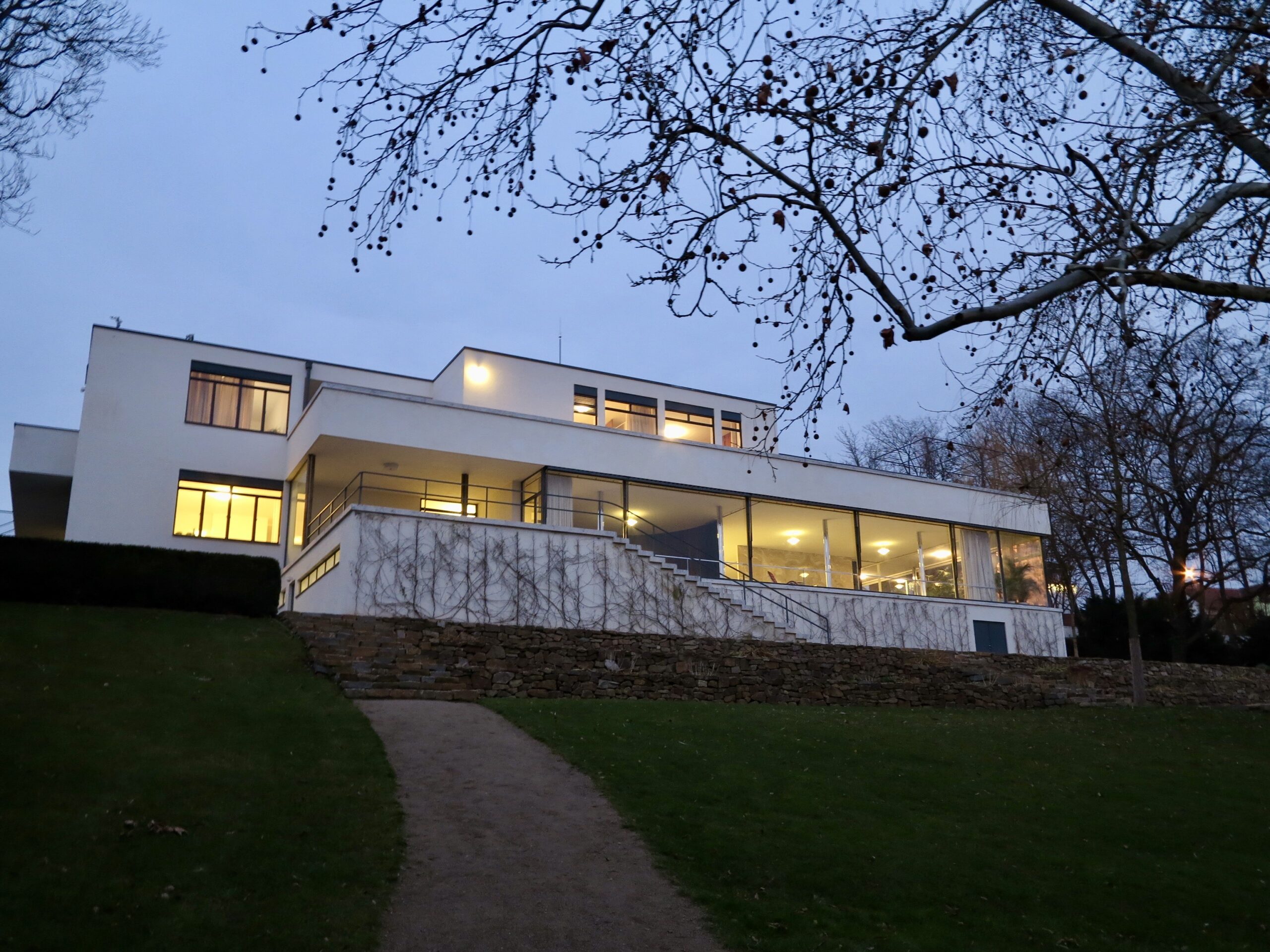 Ludwig Mies Van Der Rohe’s Villa Tugendhat is a beautifully complete encapsulation of the Modernist manifesto. He retained total creative control, from the planning stage to the finishing touches of the interior, resulting in a supremely harmonious finished product. Today, it stands as a stalwart of Modern design, fossilised in stucco, steel, and stone. 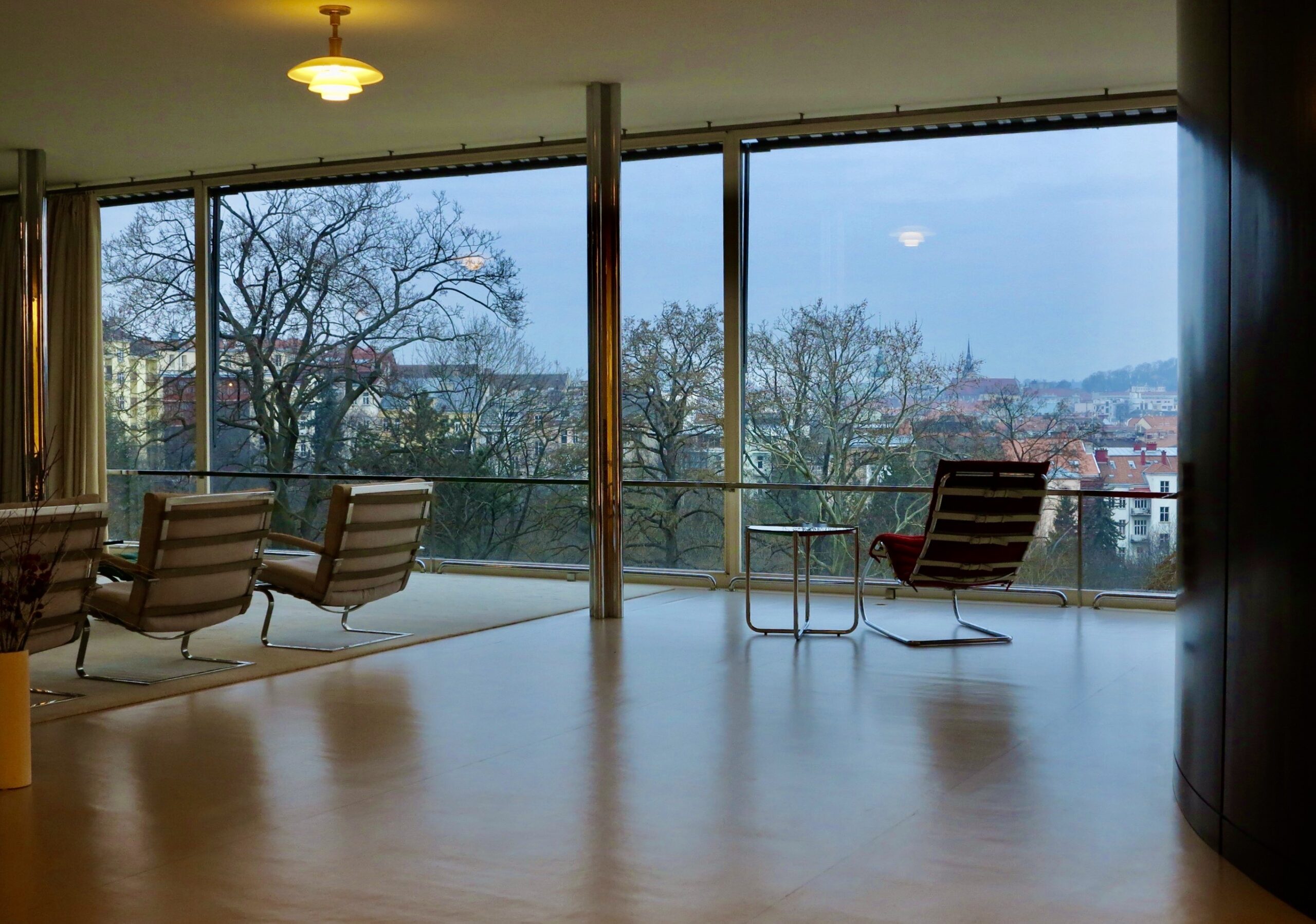 The villa sits in the Czech city of Brno, where commissioners, Grete and Fritz Tugendhat put down roots in 1930. It’s something of a monument to Modernism, composed of cutting-edge engineering and a tapestry of noble materials. Mies Van Der Rohe differed from many Modernist architects in his approach to materiality. It’s common that these villas take on a monochromatic palette applied to plaster and metal. Mies Van Der Rohe, however, felt that Modern design could – and should – include noble materials with rich details and a sense of character. He also opted for a warmer tone on the walls, applying raw sand-coloured plaster without the typical stark white coating. 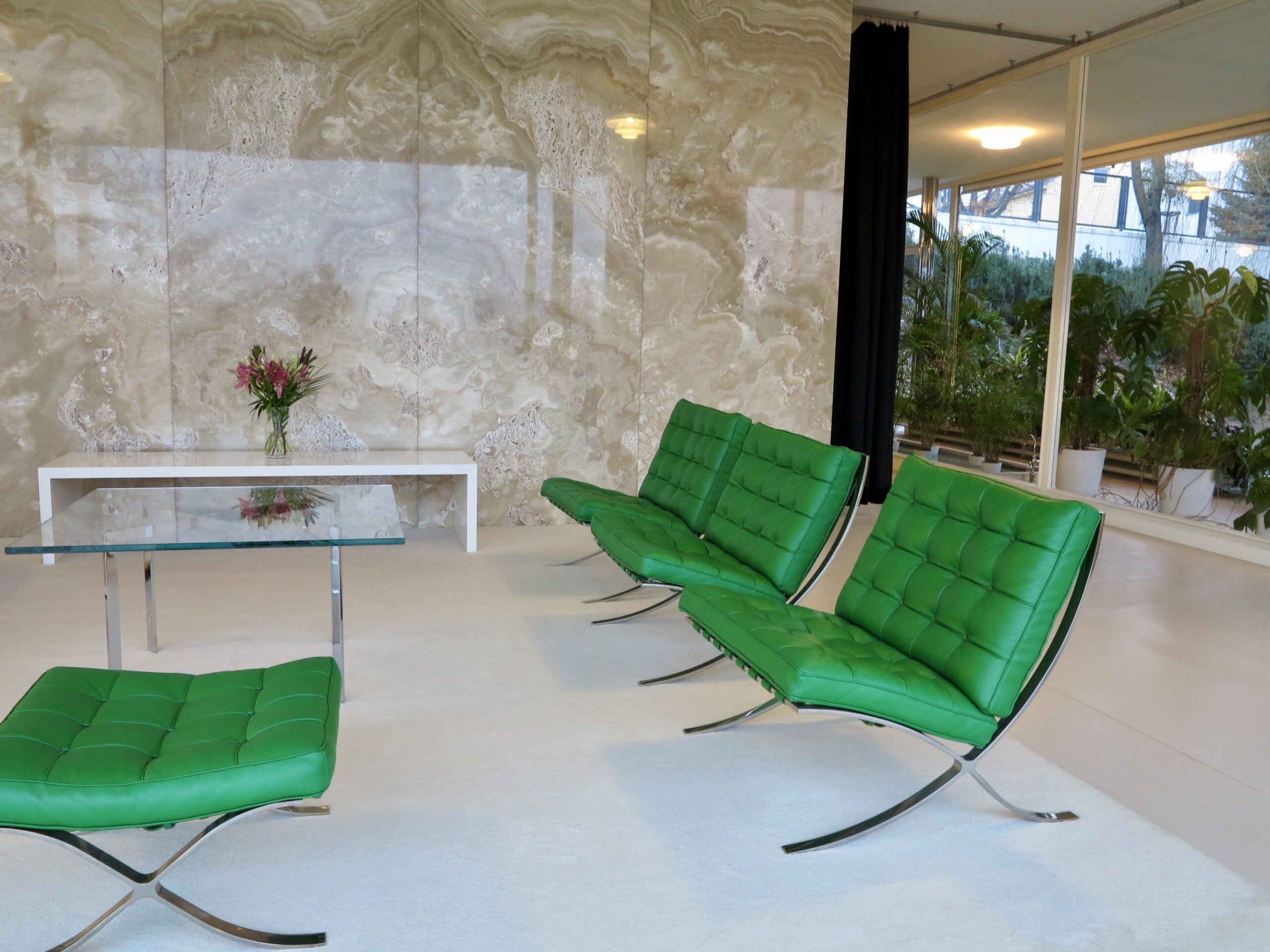 Mies Van Der Rohe’s vision for the home was all-encompassing. He even designed the furniture, with help from Lilly Reich and Sergius Ruegenberg. Iconic pieces like his Brno chair (one of Tom’s all-time favourite designs) complete the clean, streamlined effect of the home, punctuating the interior with accents of tubular and strip steel. This, tempered by his introduction of warmer materials, creates a lovely sense of balance in the home, sitting on the edge of modern innovation and domestic comfort. The villa was designed with novel technology, like an iron structural skeleton, an air conditioning system, and state-of-the-art motorised mechanics to retract windows in full. Mies Van Der Rohe also worked exotic woods into the scheme, like rosewood, zebra wood, and Macassar ebony. This infusion of organic materials extended to a wall of white onyx, which was partially translucent, revealing the natural patterns and details within the stone when lit by the sun. The Tugendahts noted that on sunny winter days when the light was strong, “it was sufficiently demonstrated that the stone was transparent and that certain veins on the back side shone red when lit up from the front by the sunset, it was a joyous surprise for even him (Mies Van Der Rohe)”. 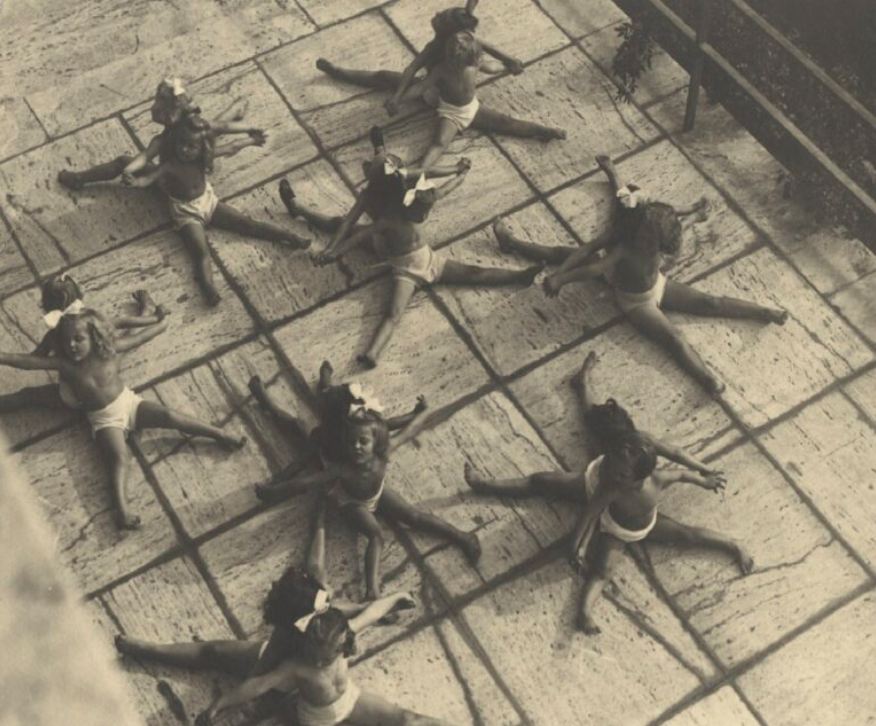 Children at play on the terrace of Villa Tugendhat, 1945-50; credit: tugendhat.eu

When it comes to Modernist villas, there’s a good deal of discussion around their practical liveability. In the case of Villa Tugendhat, the owners were enthusiastically satisfied with the final product and the ease of living which it afforded them. They rejected the notion that this house was purely an expression of high art, maintaining that it was also very much their happy home. 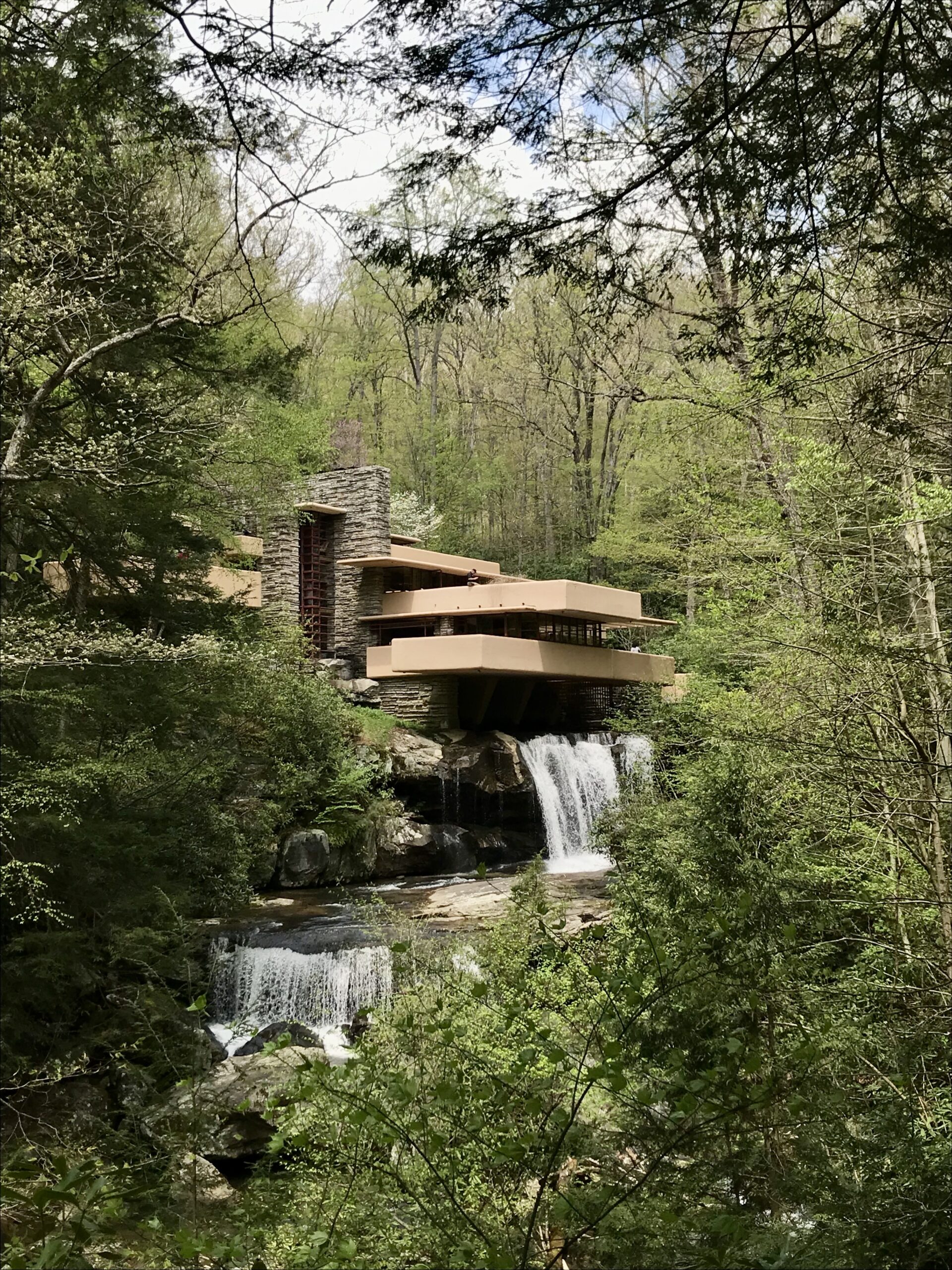 Fallingwater is arguably Frank Lloyd Wright’s most infamous contribution to architecture. It emerges from the landscape as a Modernist mirage amidst the wild mountains of Mill Run, Pennsylvania. It was designed in 1935 for the architect’s friends, the Kaufmann family. What began as a friendly collaboration has since been named the “best all-time work of American architecture” by the American Institute of Architects. Today it exists under the stewardship of the Western Pennsylvania Conservancy as a truly captivating expression of Lloyd Wright’s style of organic architecture, uniting art and nature. 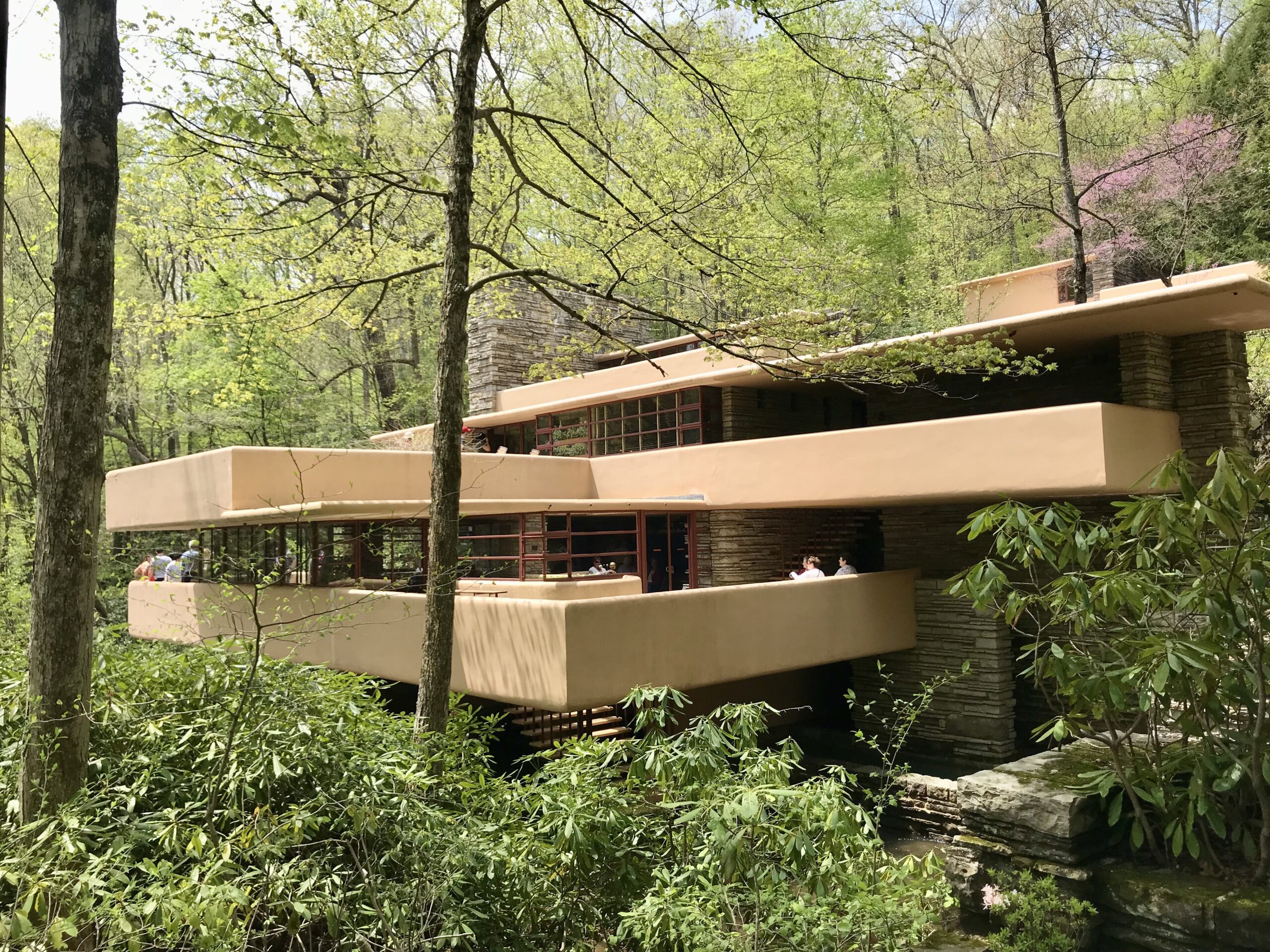 Lloyd Wright drew inspiration from Japanese architecture in creating this cannily cantilevered design seamlessly immersed in its natural environment. The home is enveloped not only by the surrounding hemlock forest and rambling creeks, but also by the sounds of its 5,100-acre home in Bear Run Nature Reserve. The symphony of creaking trees, crashing water, and melodic birdsong create the backdrop to this Modern marvel. Lloyd Wright connected every element of the home to its environment, fostering a closeness to nature through his choice of materials and an architectural plan that guides inhabitants outward. 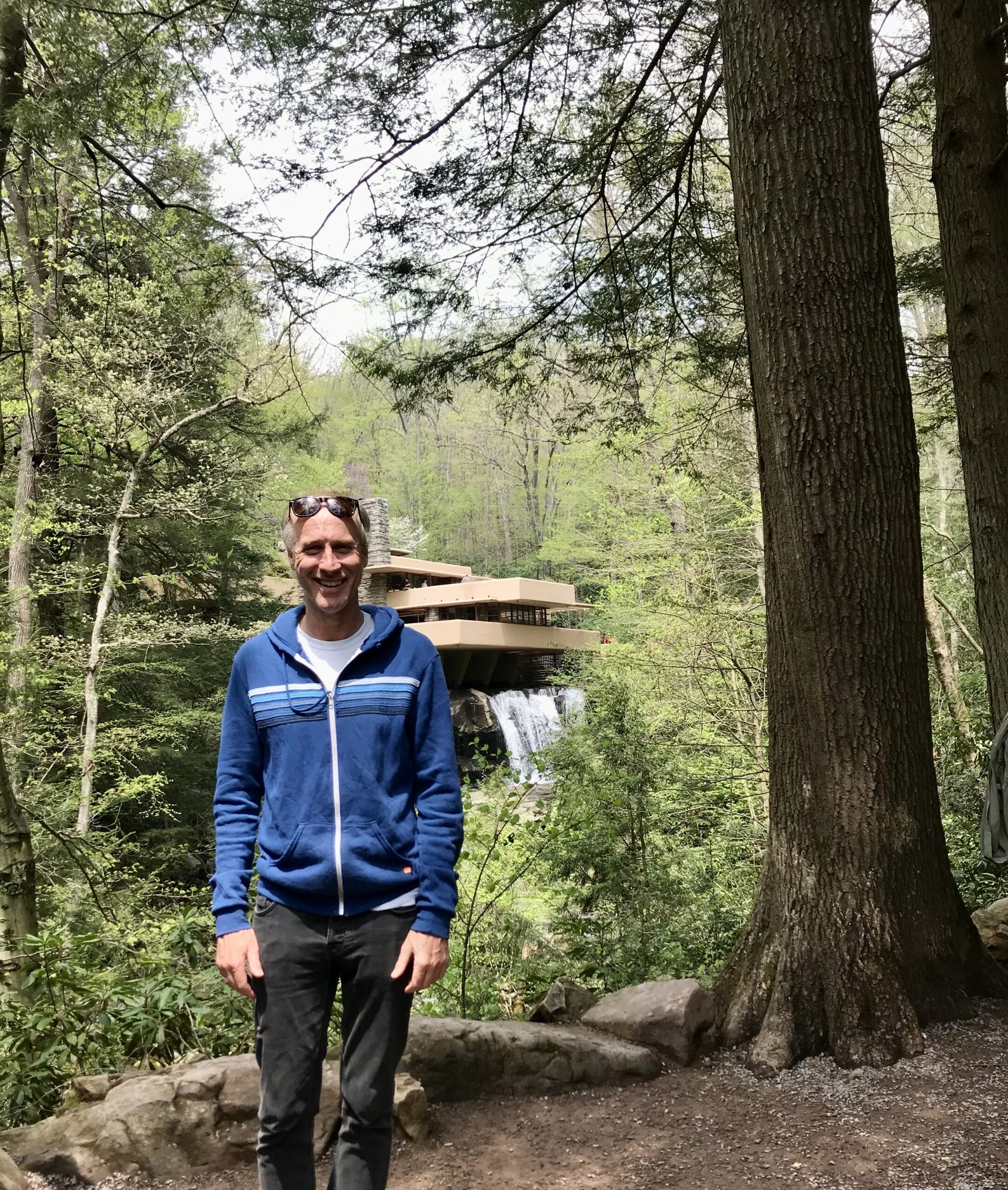 Tom at Fallingwater in 2018, designed by Frank Lloyd Wright

The living room of Fallingwater features sliding glass doors that lead down to the river’s edge, which is also accessible from Kaufmann Sr’s second-story bedroom. There was even a stream that was allowed to trickle into the house, which could be a contributing factor to the home’s infamous leaks. Edgar Kauffman Sr. was no stranger to these intermittent inundations, referring to his home as a ‘seven-bucket building’. There is, however, something to be said for Lloyd Wright’s commitment to bringing the outdoors in…

The house echoes its natural environs, mimicking the shelf-like forms of the rock around it with cantilevered extrusions and stacked stone detailing. Lloyd Wright has kept to a subtle, organic colour palette for the exterior, helping to blur the lines between the house and its natural surroundings. The concrete structure takes on an ochre tone, while the steel frames of the ribbon windows are painted red, relating to the colours of the trees. 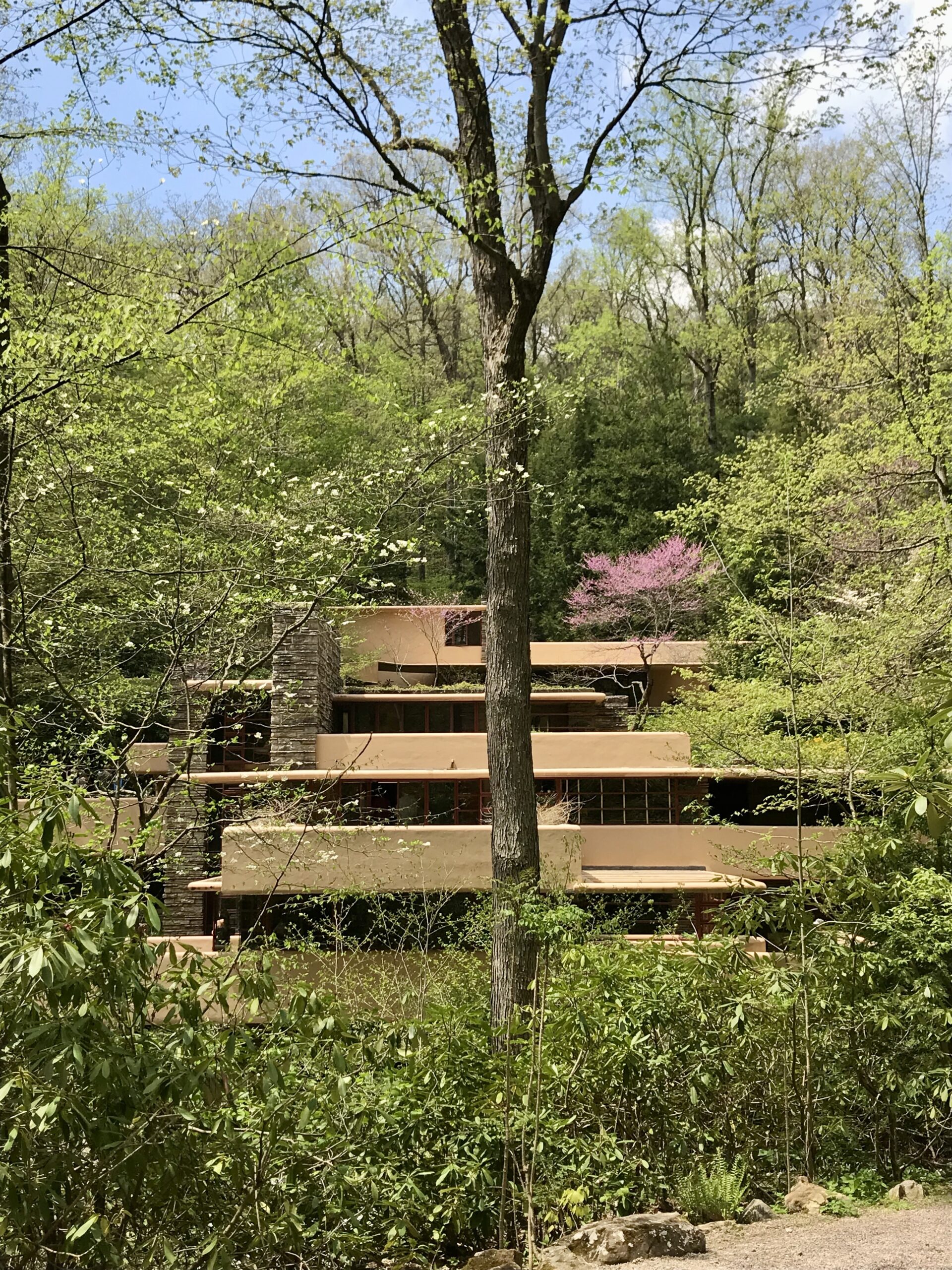 This ingeniously situated house is built above a waterfall, appearing to hover on the precipice of the cascade. The result is Fallingwater, a confluence natural and man-made beauty. It’s a house that is very much of its environment, constructed of natural materials extracted from the property, like sandstone. Consequently, the interiors have a warmth to them, with a wealth of tactile materials like stone, wood, and cork. Upon entry, the anchor of the home is a central sandstone hearth designed around two boulders left in place. Lloyd Wright also furnished Fallingwater with 169 site-specific pieces that heighten the effect of the house, playing into its shelf-like, horizonal skew and lyrical unity with its surrounding nature.

Whether it’s to your personal taste or not, Modernism is a foundational element of the bedrock of design. Its principals of simplicity, efficiency, and purity of form remain salient qualities of good architecture to this day. The products of this forward-thinking sensibility are designed to create space, encapsulating and holding it so that we may do more, better and with pleasure. There’s a certain bright-eyed optimist to Modernist design that serves to invigorate its inhabitants. The effect on contemporary creators stands strong, moving designers to build objects and environments with an eye to engendering serenity and a sense of quotidian enjoyment in all that we do.