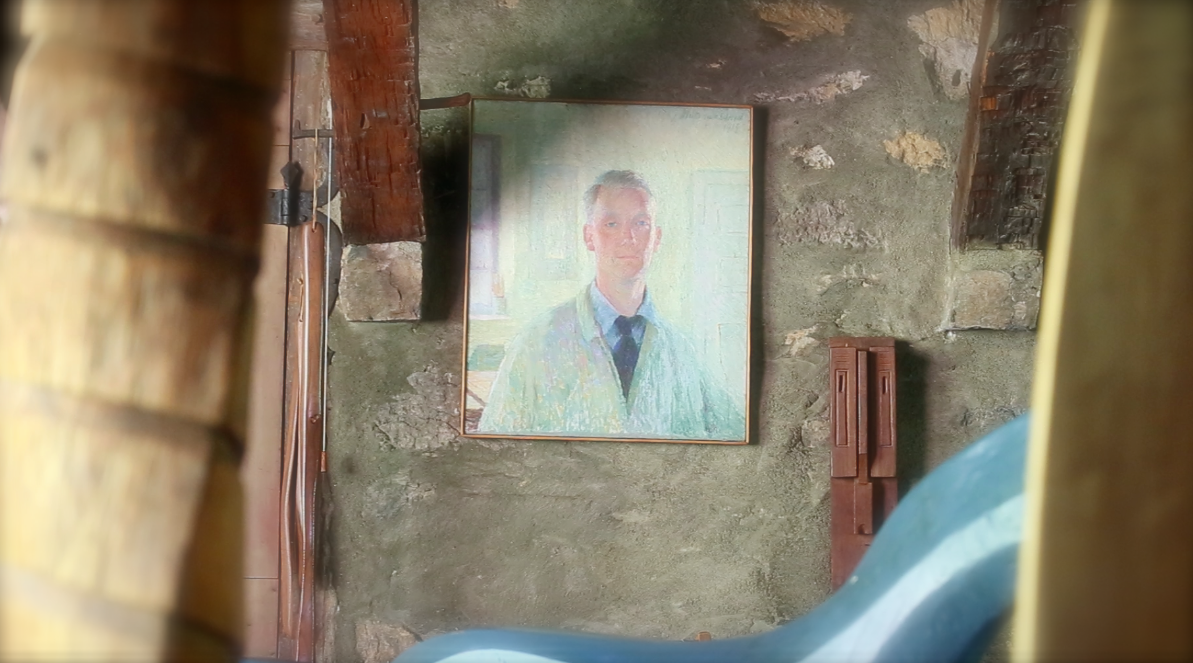 Wharton Esherick’s Self Portrait (1919) in his studio

To Wharton Esherick, woodworking was a playful practice and an expression of joy. He reasoned that “if it’s not fun, it’s not worth doing”. This upbeat approach to furniture design has its roots in Esherick’s struggle to succeed as a painter. Eventually he began carving frames for his artwork, which led him towards woodworking and more sculptural practices. He qualified his discovery of sculpture as sheer liberation. He felt he’d finally made connection with an intuitive form of expression. It came naturally and with an innate cascade of contentment. It wasn’t work; it was play. And through his play he forged flowing forms charged with their joyful origins. 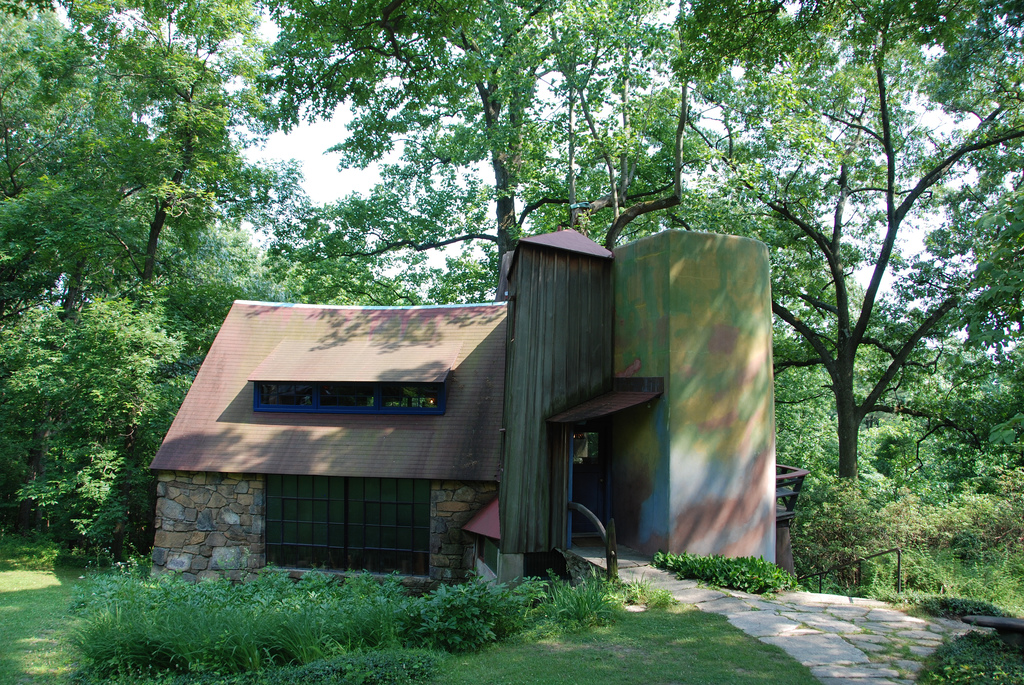 The Home and Studio of Wharton Esherick on Valley Forge Mountain in Pennsylvania; photographed by Ben Yanis

Today, Esherick is lauded as one of the most important furniture designers of the twentieth century. His work roves between the Arts and Crafts Movement and the Studio Craft Movement, of which he was an instrumental pioneer. His designs are geared towards human enjoyment, with an eye to eliciting delight above all else. He conjured moments of contentment, woven intrinsically into each object he designed. 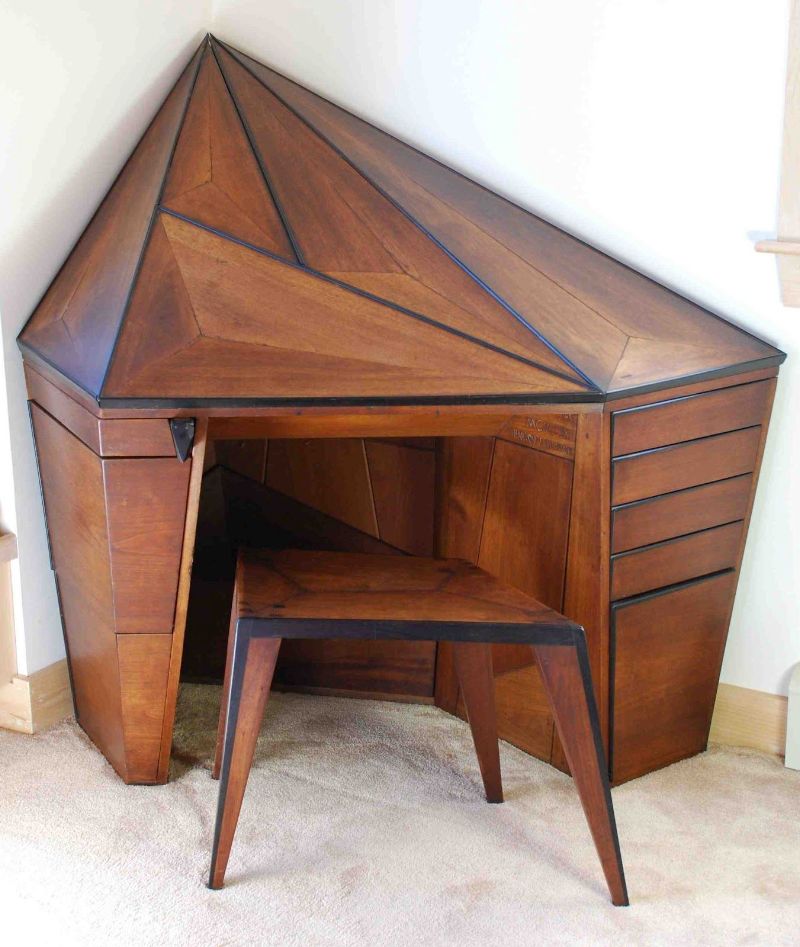 In Esherick’s work we can spot the influence of Rudolph Steiner’s organic architectural forms, as well as the German Expressionist and Cubist art movements. Pieces like his ‘Corner Desk’, designed in the 1930’s, reflect clear stylistic elements of the latter two. Though, interestingly, the origins of his understanding of formal expression began to take shape through rhythmic dance sessions Hedgerow Theatre in his native Pennsylvania. It’s easy to spot a sense of this rhythmic movement in works like his 1951 Single Music Stand, which finds its footing on spindly, curved legs before launching into an irreverent backbend. 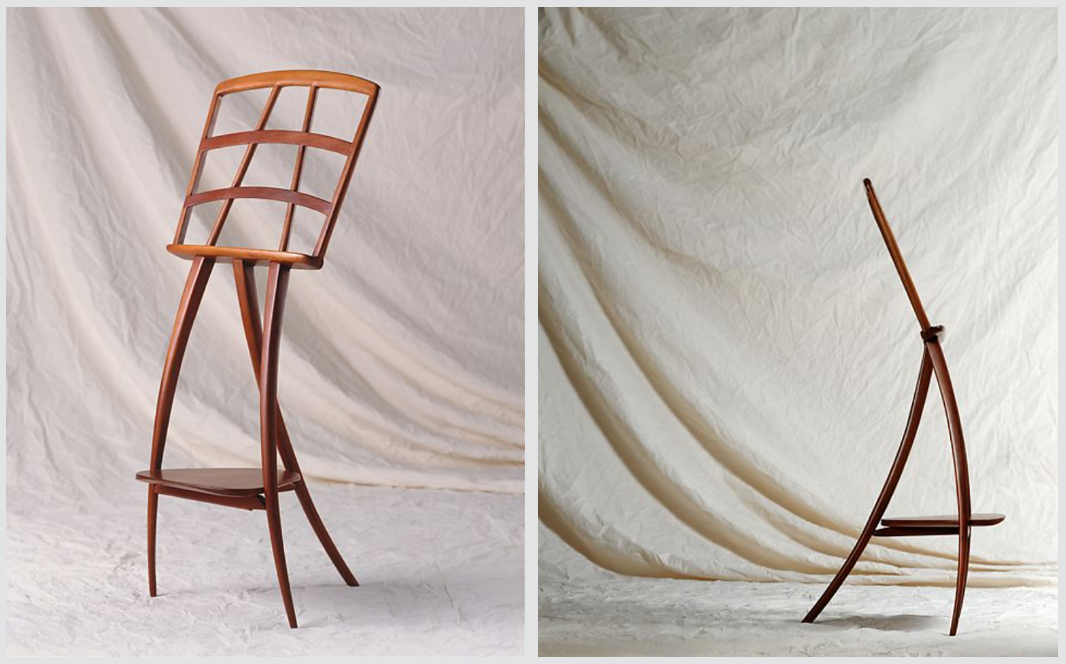 Working with a material that carries such character and history informs its ultimate incarnation. Esherick traced each characteristic of the wood to expose its lyrical beauty to maximum effect. He designed one-of-a-kind pieces for specific clients, with whom he knew he could take full artistic license. One of his main patrons was Helene Koerting Fischer, for whom he designed the S-K Chair when she called on him to furnish her company’s board room. The business in question manufactured precision machine parts, which Esherick picked up on with his forward-thinking, dynamic design. In 1957, this was quite a novel aesthetic and a manifestation of Esherick’s pioneering practice. 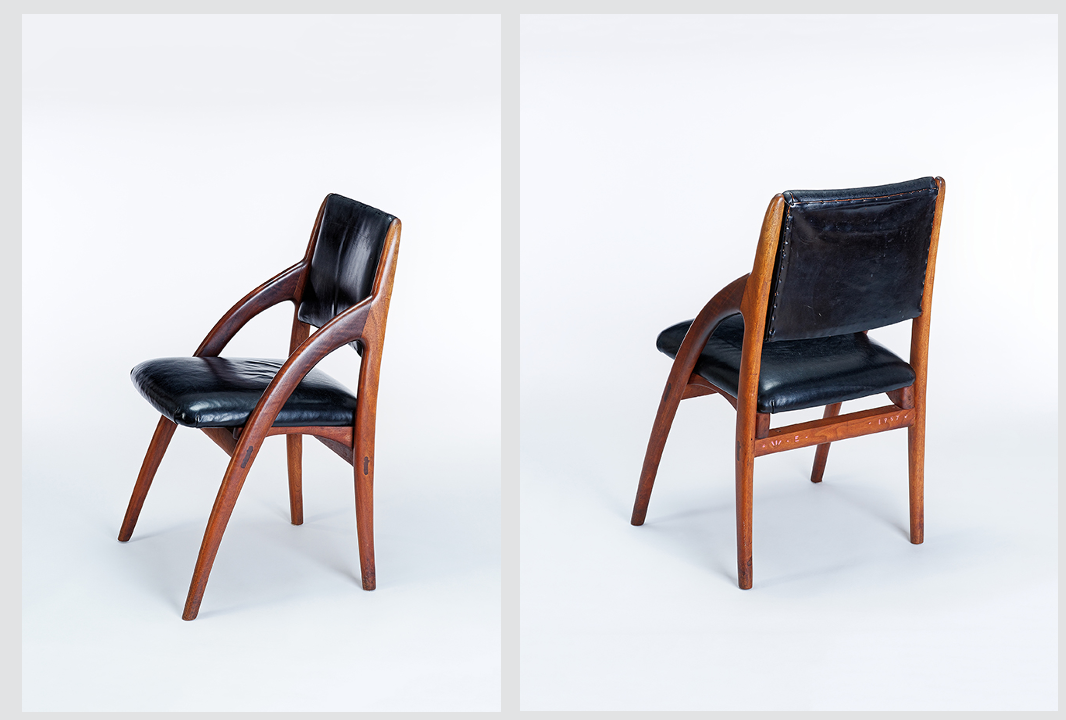 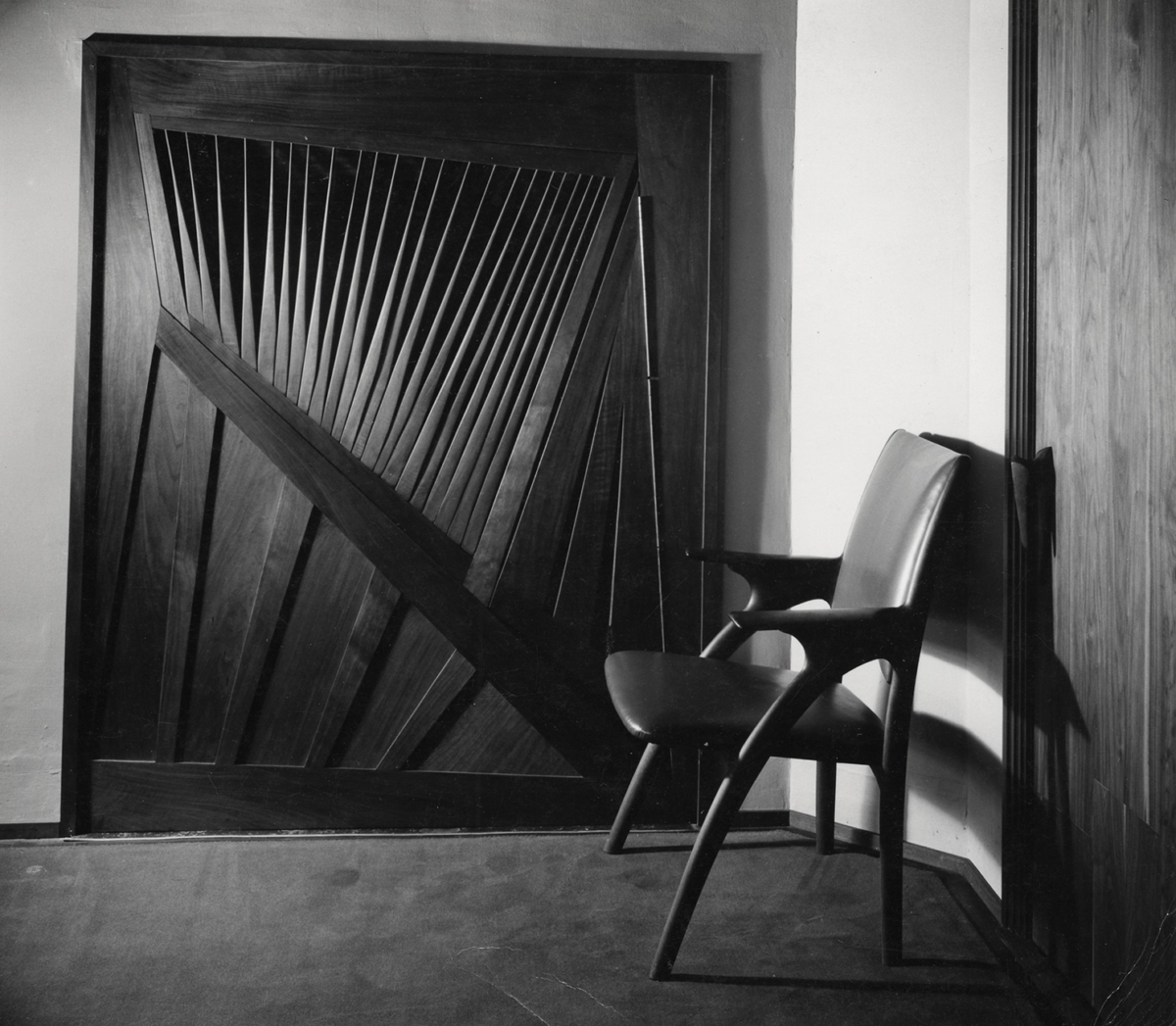 Esherick’s practice extended beyond freestanding furniture. He was approached on several occasions to produce built-in elements of his clients’ homes, his unique style of woodworking leaping from floor to ceiling. One such project was the home of Curtis Bok, for whom Esherick created a hearth as well as a doorway. The result is a ricocheting accordion effect of graduated carvings, radiating from each of the openings. 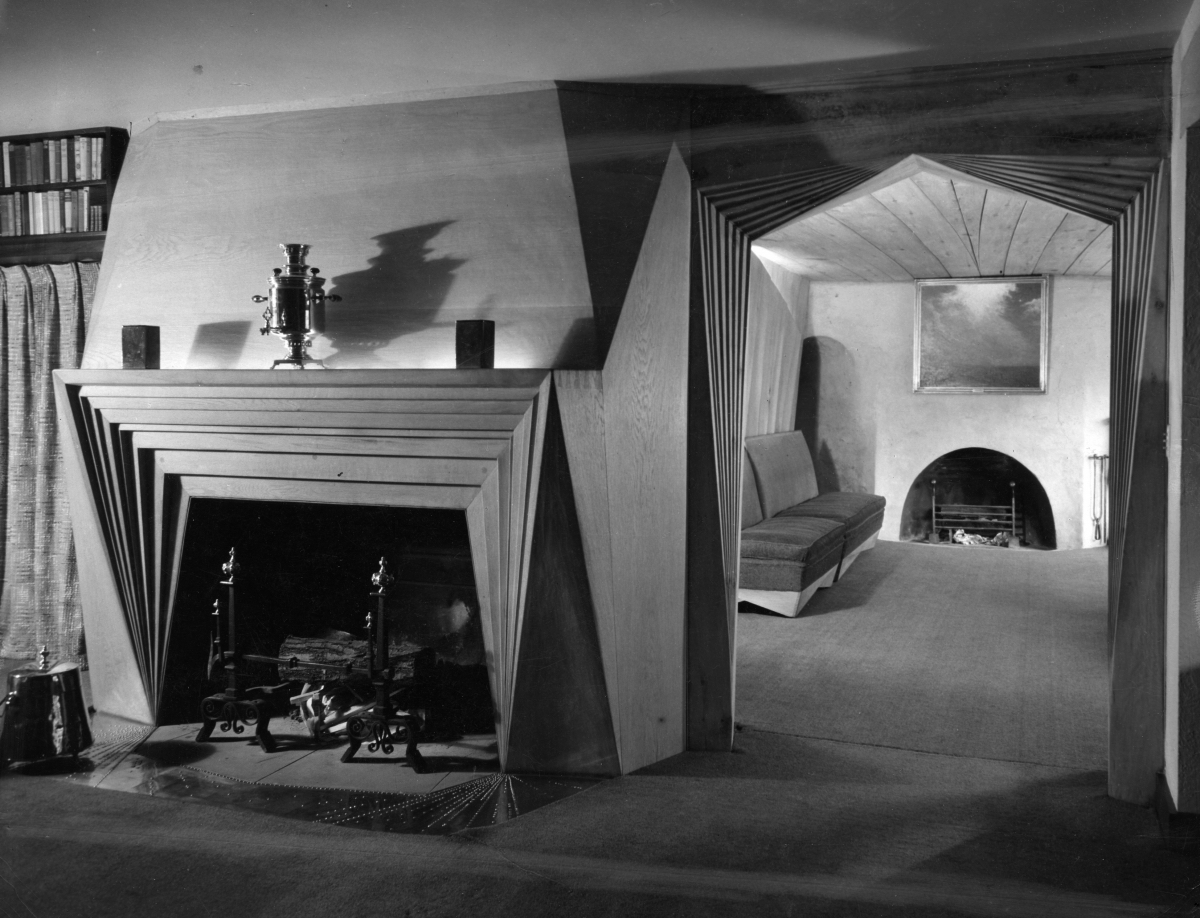 Esherick led the Studio Craft Movement by example. The home and workshop that he built over the course of forty years are vestiges of his ethos, not only for creating, but for moving through the world. He was a romantic, to be sure, and one can sense the wholehearted intentionality with which he lived when you set foot in his domain. He leaves behind a legacy of pioneering formal innovation – of pushing the boundaries of a traditional material to reveal a delightfully modern aesthetic. His contribution to the Studio Craft Movement is indispensable. Though, perhaps most poignant is his demonstration of just how far we can go when we simply follow our joy. 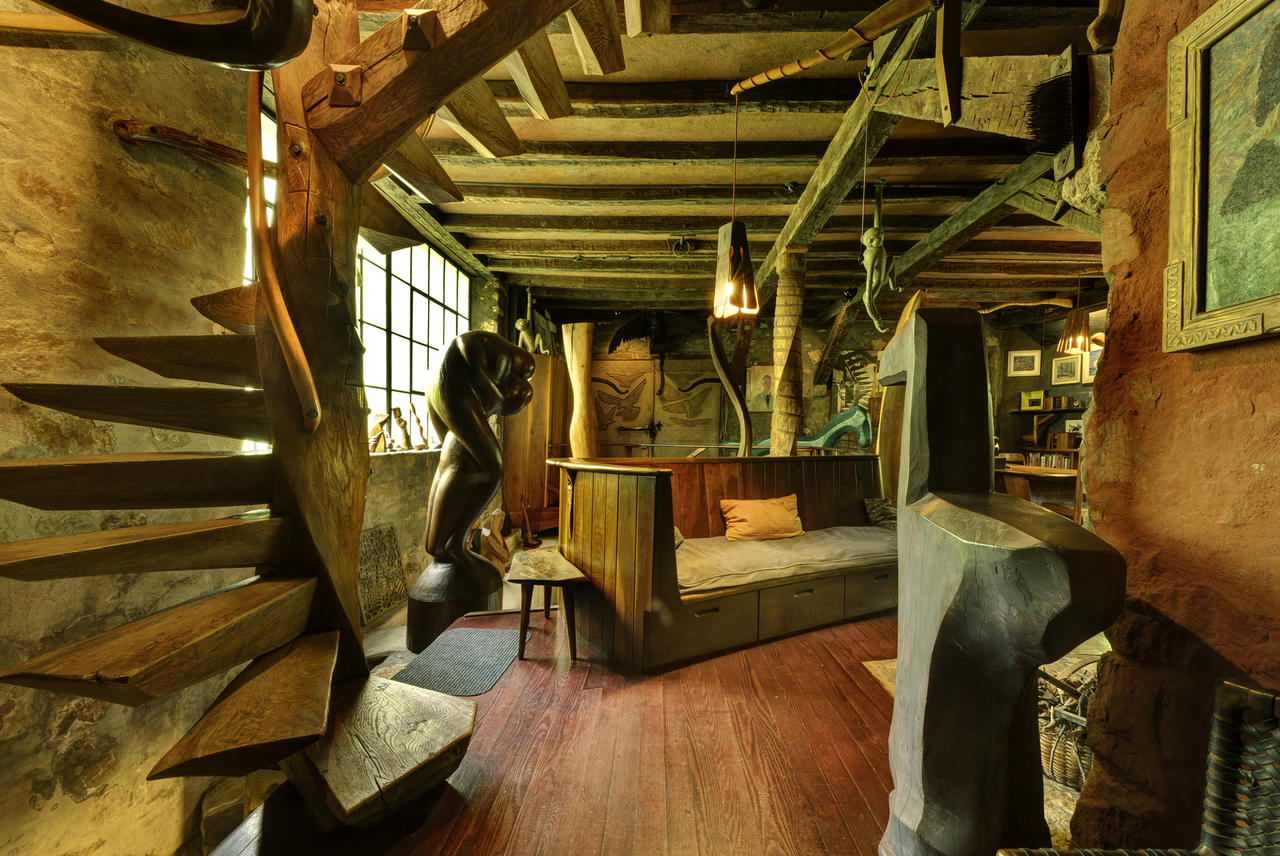