It’s trite but it’s true: two heads are better than one. The old adage reaches new heights when each “one” is a creative maestro in their own right. From famous artists, Henri Matisse and Pablo Picasso’s respectful rivalry; to designers, Charlotte Perriand and Pierre Jeanneret’s joyful friendship; to American painters, Robert Rauschenberg and Jasper Johns’ tempestuous romance, it’s clear that when we open ourselves up to close bonds, spectacular things can come of it. 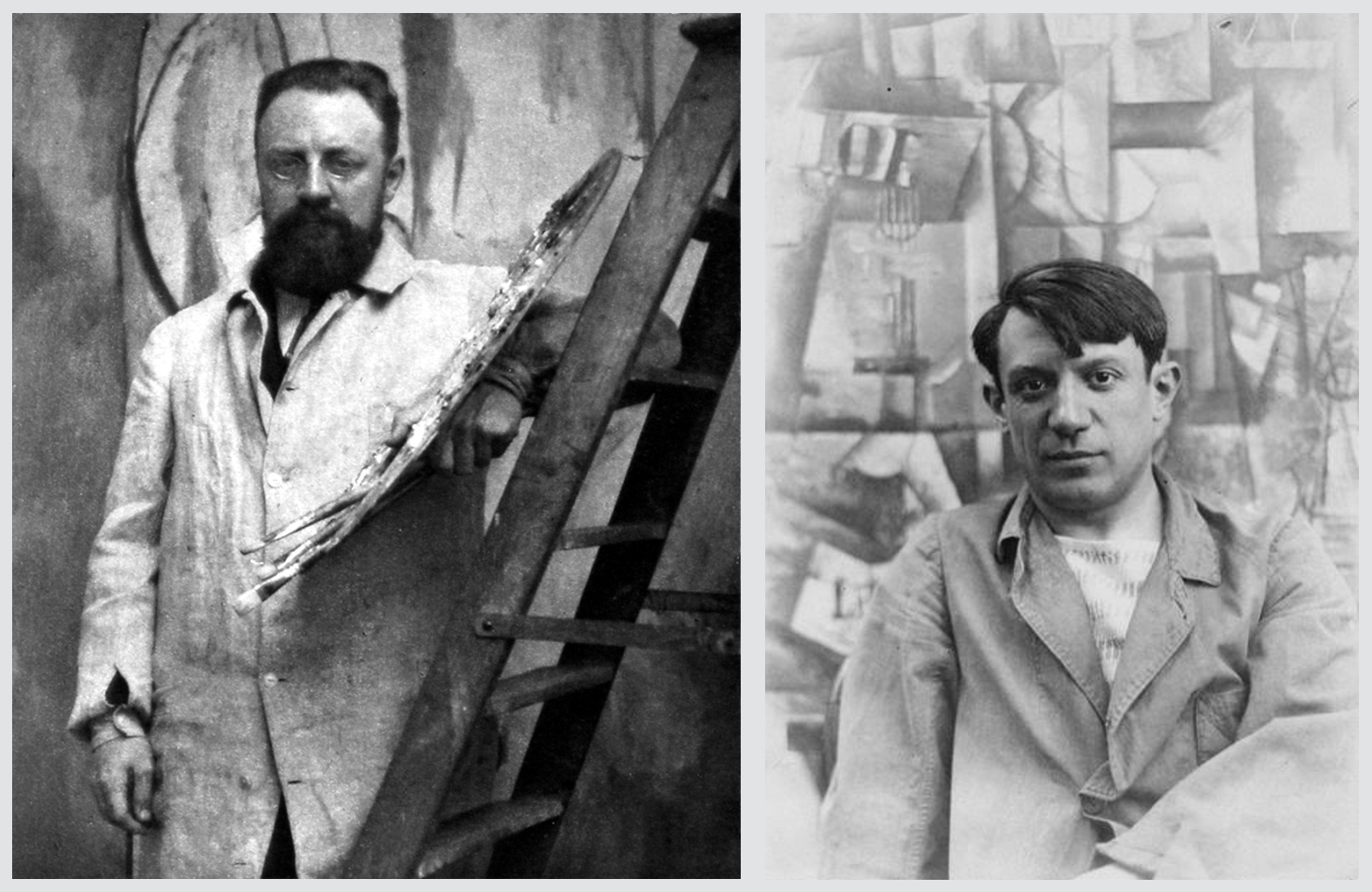 Left: Henri Matisse in 1913; photographed by Alvin Langdon Coburn; Right: Picasso in front of his painting The Aficionado at Villa les Clochettes in 1912

It might be a stretch to neatly characterise the dynamic between Henri Matisse and Pablo Picasso as a friendship. Professionally, the two were rivals, pushing each other to new heights in a back-and-forth which Matisse likened to a boxing match. But this competition bred respect and, with time, profound admiration.

When Gertrude Stein introduced Matisse and Picasso in 1906, they feigned ignorance of one another before connecting over a mutual reverence for the work of Paul Cezanne. Following the meeting, Matisse quipped to Stein that he and Picasso were, “as different as the north pole is from the south pole”. It’s an intriguingly charged parallel as the two poles are, first, remarkably similar in nature, and second, inextricably linked as two opposite loci of a bi-polar magnetism. The artists were drawn together, propelled by a rivalry which fanned the fires of genius.

Matisse and Picasso followed one another’s oeuvres and manoeuvres closely, exchanging paintings and becoming each other’s best critics. They were invested in keeping an eye on the competition and charting out how one might get a leg up on the other. Picasso attests that, “[n]o one has ever looked at Matisse’s painting more carefully than I; and no one has looked at mine more carefully than he”. 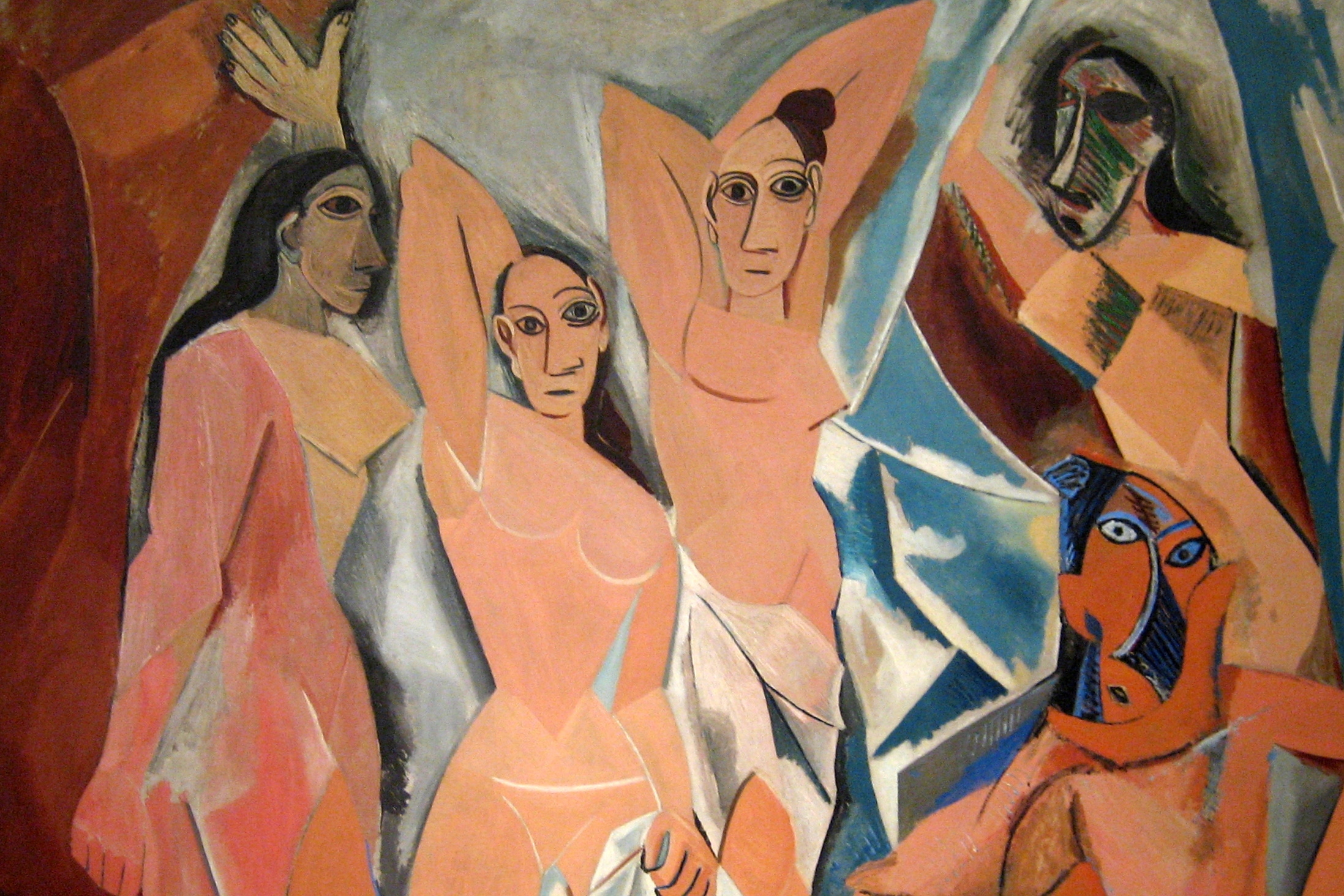 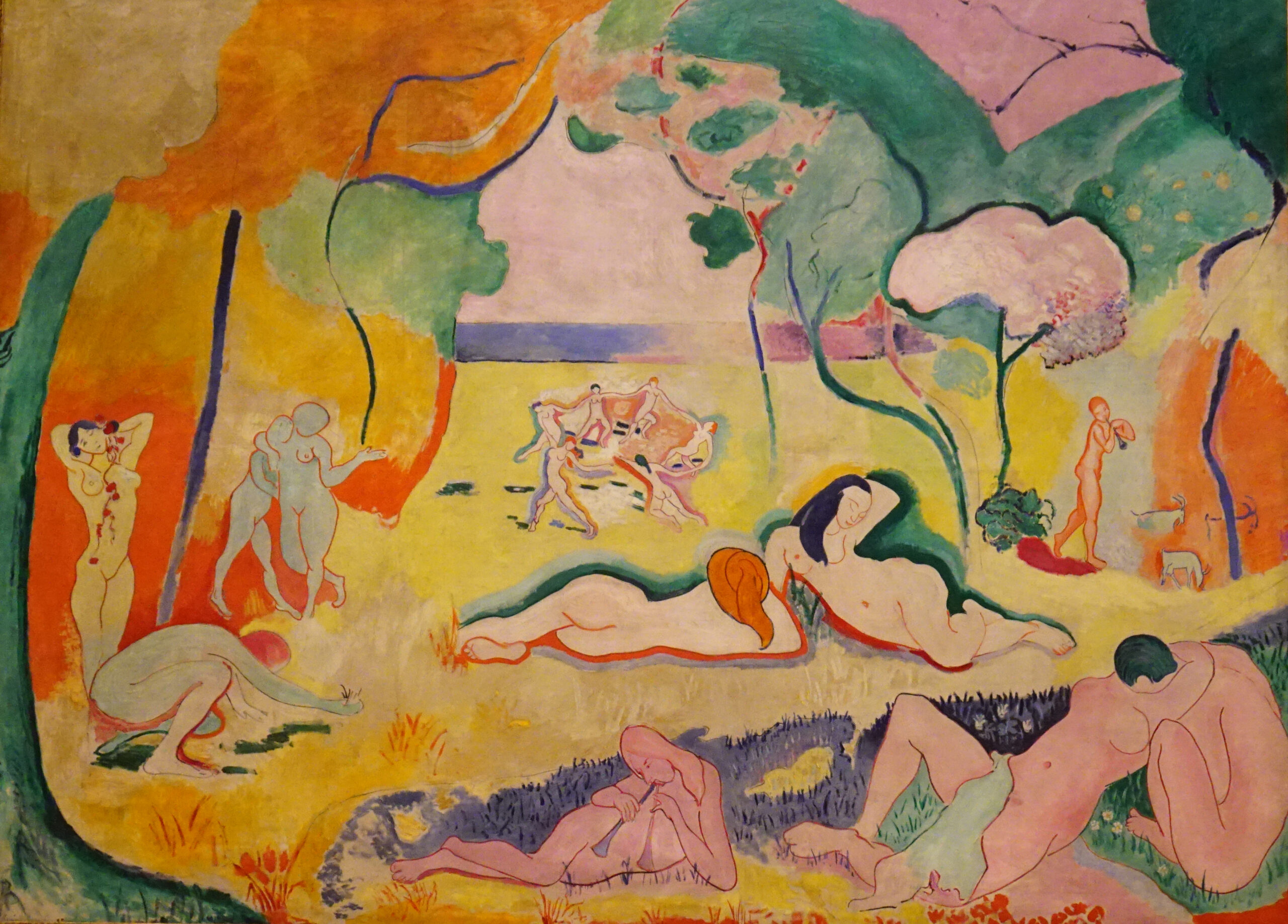 This fraternal rivalry pushed artistic style to new heights, which, perhaps most notably, took the form of Picasso’s 1907 painting, “Les Desmoiselles d’Avignon”. The piece was a bold display of one-upmanship over Matisse’s “Le Bonheur de Vivre” of the previous year. Art Historian, John Golding asserts that, “[i]f Le Bonheur de vivre is one of the landmarks in the history of art, then Les Demoiselles . . . changed its very course. It remains the most significant single twentieth-century painting.”. Needless to say, Picasso must have been pretty pleased with himself. Careful consideration reveals the similarities in the women’s angular forms, limbs seductively contorted into acute angles. Matisse later embraces Picasso’s geometric approach to form, cultivating elements in his own artworks. Equally, there is a greater spectrum of colour in “Les Demoiselles d’Avignon” than in Picasso’s previous works, a characteristic he developed in appreciation of Matisse’s technicoloured creations.

The rivalry between Matisse and Picasso spurred each artist to new heights, raising art in its entirety up with them. In the end, the pressure consolidated into a deep respect for each man as an artist, a worthy adversary, and something of a brother in arms. “Only one person has the right to criticize me,” Matisse asserts, “[i]t’s Picasso.” Picasso, it would seem, felt very much the same way, remarking that, “[a]ll things considered, there is only Matisse”.

Charlotte Perriand and Pierre Jeanneret are best remembered as partners in design, collaborating alongside Jeanneret’s cousin, Le Corbusier. Though, their relationship went much deeper than the professional. They cultivated a close friendship, which not only advanced and enriched their work but grew into a supportive personal bond – and eventually, flourished into romance. 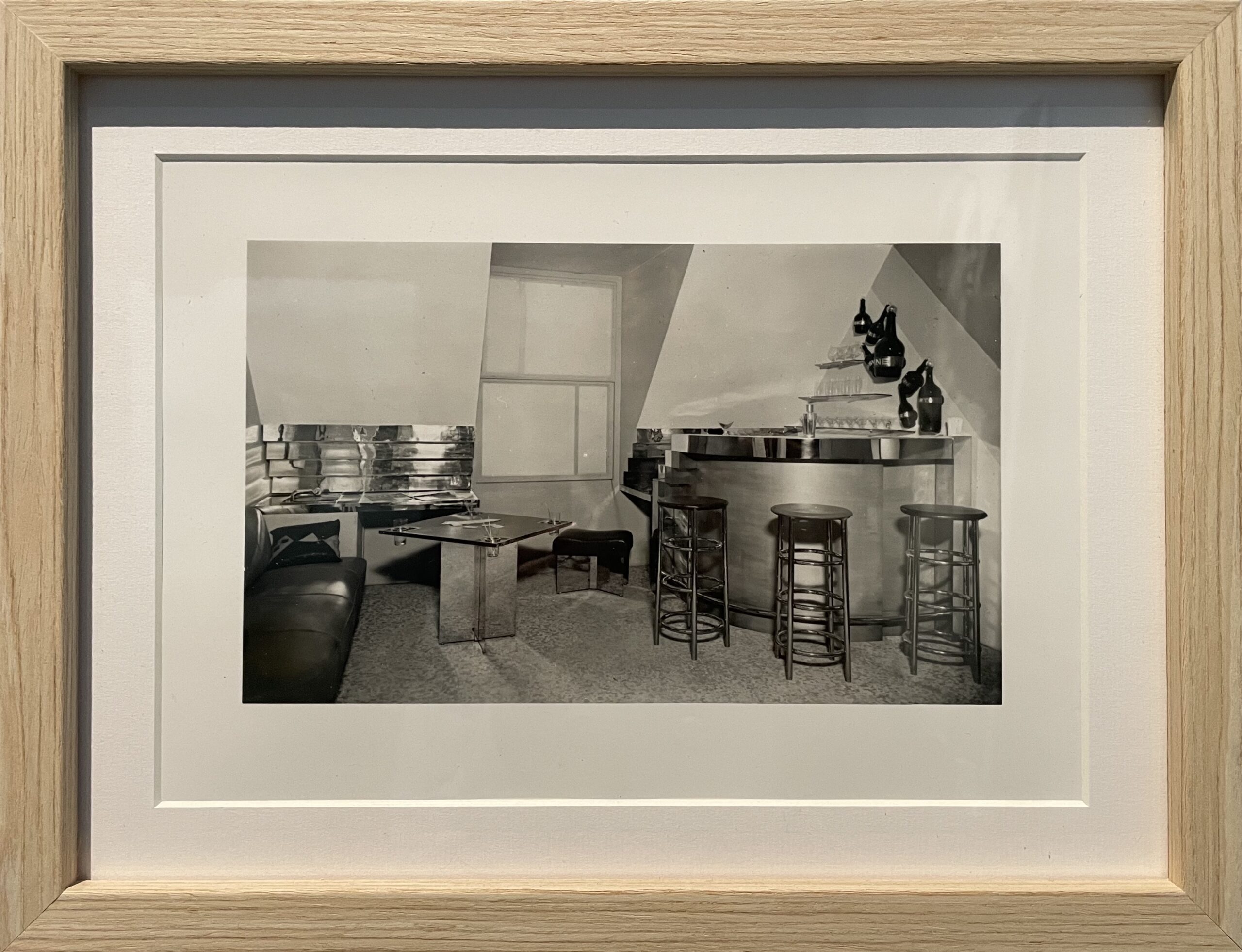 In the beginning, Jeanneret was instrumental in launching Perriand’s career. Had he not brought Le Corbusier along to recognise the ingenuity of Perriand’s 1927 “Bar Sous le Toît”, Le Corbusier may have remained aloof to her talents. From that point on, Jeanneret and Perriand worked on countless projects together, jointly designing “Le Refuge Tonneau” in 1938. The strikingly futuristic alpine pod was conceived as a hideaway from harsh squalls on the slopes of the Haute Savoie. The structure was designed as a prefabricated metal-clad barrel that could be transported and adapted to serve its environs. The interior was primed to metamorphose from bedroom to lounge with a simple flip of the beds. “Le Refuge Tonneau” is an excellent embodiment of Perriand and Jeanneret’s Modernist sensibilities, belying the pioneering spirit of two companions bent on designing the future. 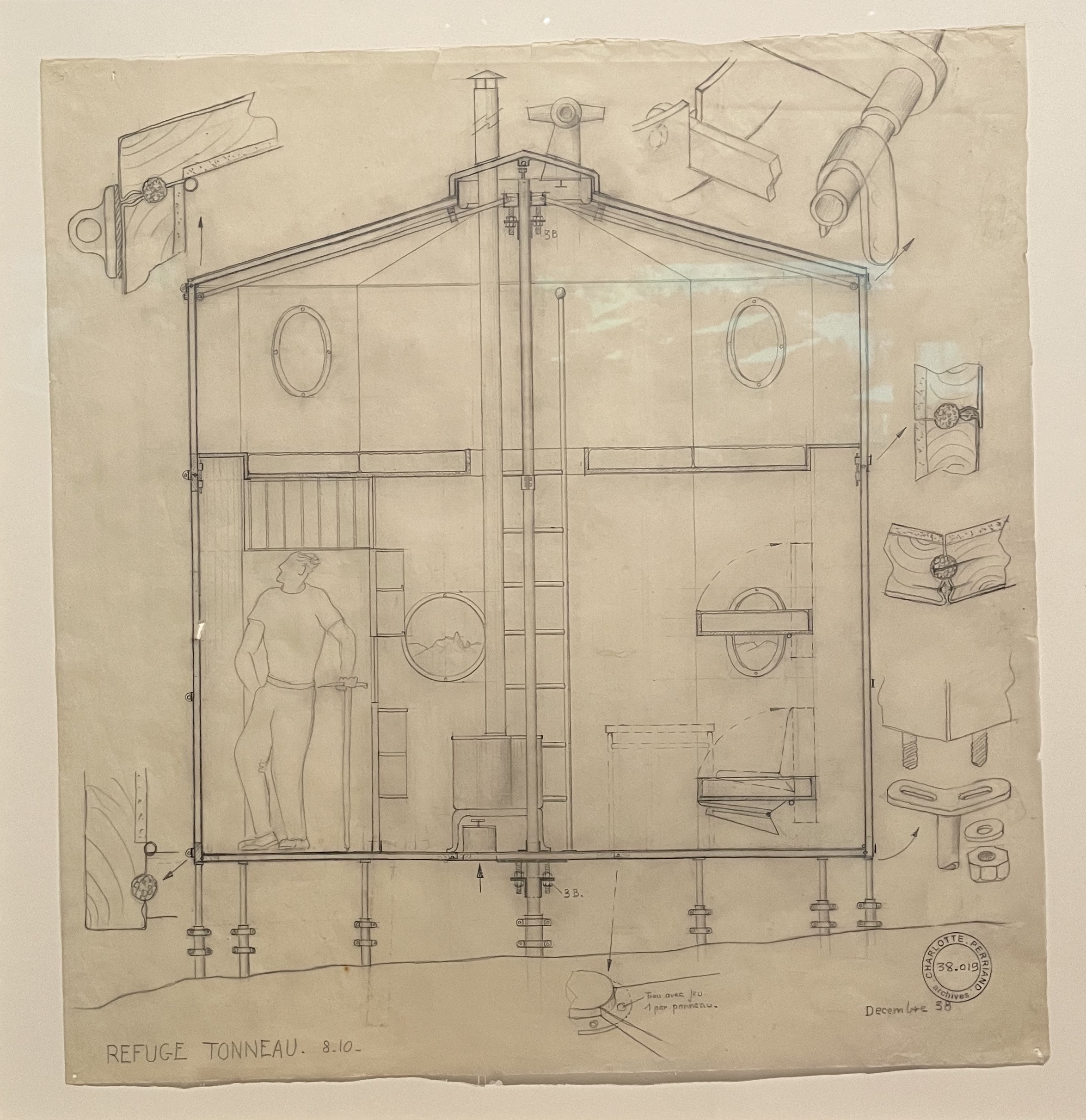 Designs for Charlotte Perriand and Pierre Jeanneret’s Refuge Tonneau; photographed by Annabel Colterjohn at the Design Museum in London

Perriand was famously enthusiastic about cultivating “the art of living”. Her life revolved, in no small part, around her drive to design. She did so joyfully and in the company of friends. Jeanneret was perhaps her dearest collaborator, the two joining together for great expeditions in search of inspiration. They walked the shores of Normandy taking pleasure in their hunt for great heaps of wonky driftwood, intriguing stones, and even skeletal formations; “…we called it our art brut”, Perriand remarks. These sojourns inspired a turn towards nature in Perriand’s work, as she looked away from mechanistic materials and began to infuse a fluid sense of organicism into her furniture designs. 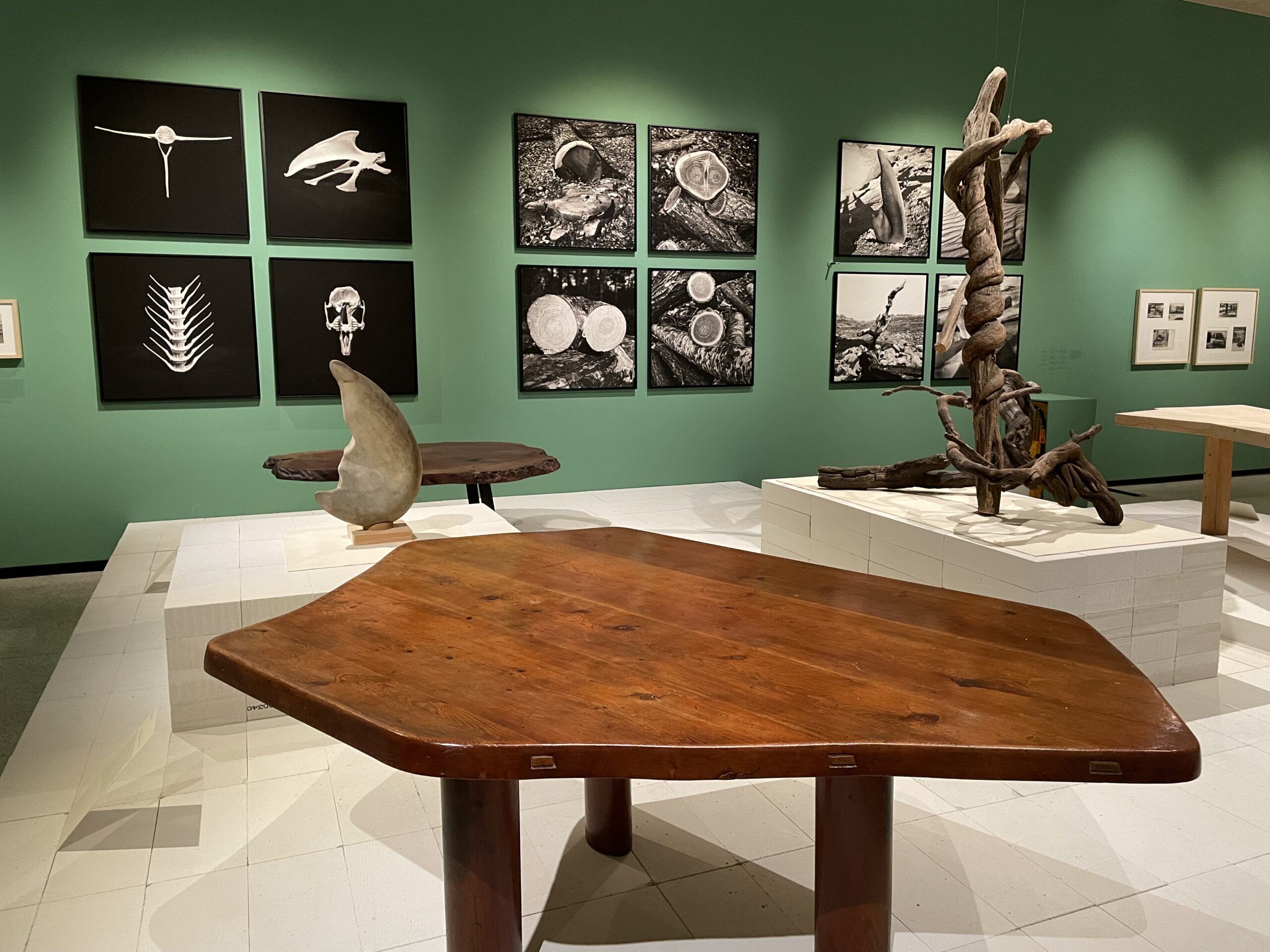 Samples and photography of Perriand and Jeanneret’s found natural objects; Charlotte Perriand’s Six-Sided Free-Form Table (c. 1951) in the foreground; photographed by Annabel Colterjohn at the Design Museum in London

Perriand and Jeanneret relied on each other in their work and in their personal lives, recognising in one another not only a well of creative energy but a true friend and champion. Theirs was a fruitful connection, not just creatively but emotionally. Fortunately, Jeanneret’s photographs and correspondences remain as encapsulations of their heart-warming bond. 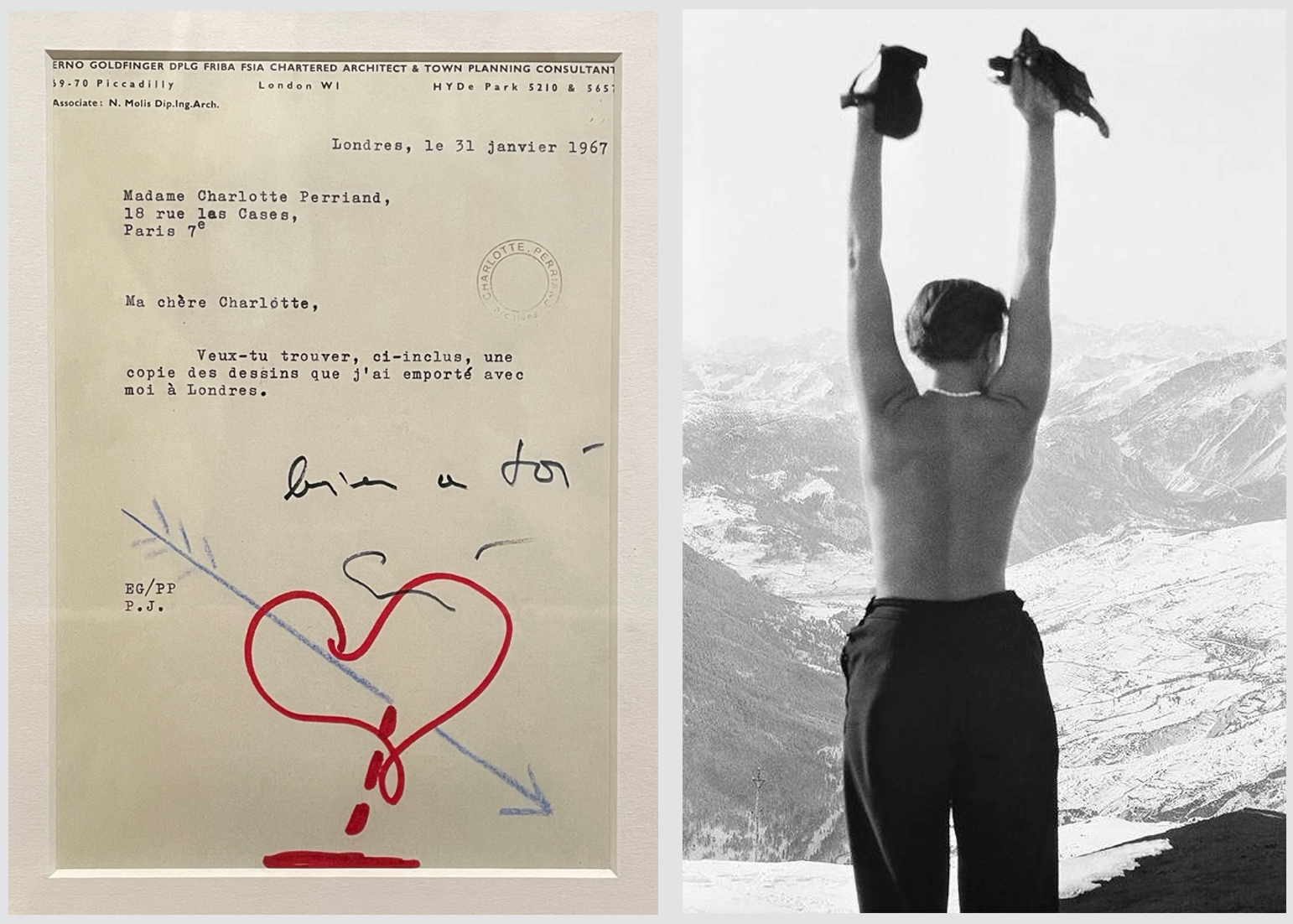 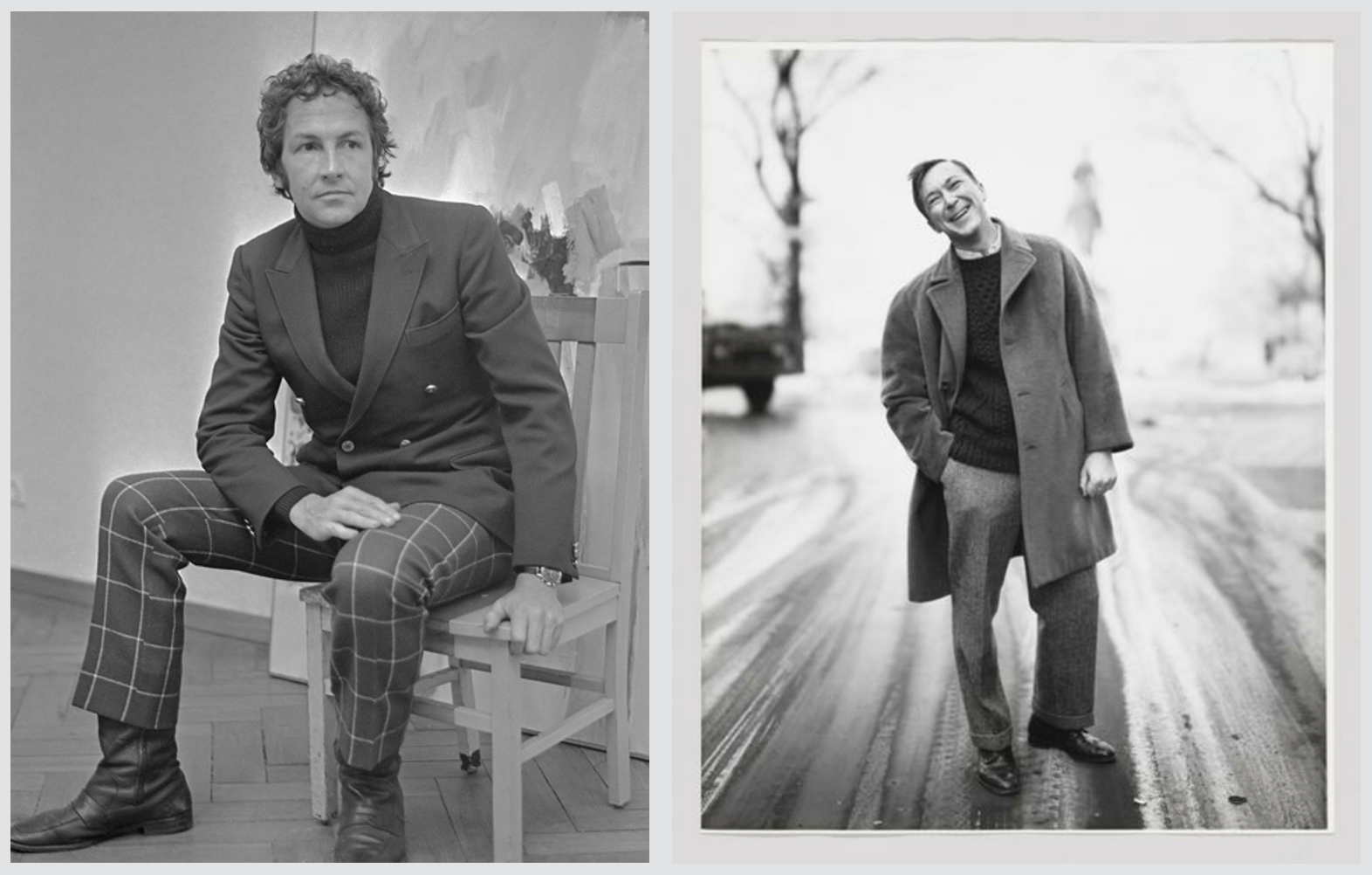 Robert Rauschenberg and Jasper Johns were, in many ways, an unlikely couple. Rauschenberg was boisterous and spontaneous in character, while Johns was given to careful, quiet contemplation. Perhaps this duality is just what Rauschenberg needed to restore balance in the wake of his romance with Cy Twombly. And, indeed, Rauschenberg’s outgoing spirit served to introduce Johns’s work to the upper echelons of the American artworld, catapulting him to new heights. 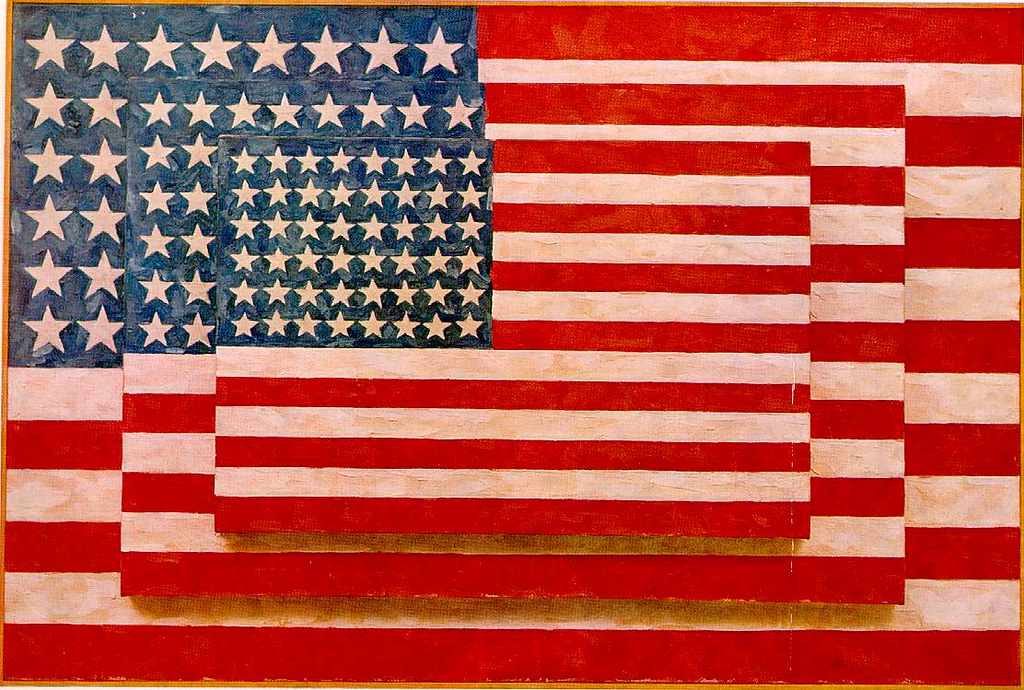 There was a creative electricity between Rauschenberg and Johns, which would incite a tectonic shift in the world of mid-century American art. Together they dismantled Abstract Expressionism, constructing in its place the fresh face of Contemporary Art as we know it today. Rauschenberg’s Combines and Johns’s Flags series constituted a shift in the conceptual focal point of artwork. Here one sees a move away from the Abstract Expressionist concern for the artist’s process as the crux of the work. Instead, Rauschenberg and Johns pivoted towards a more Contemporary interest in the viewer’s relationship with the artwork, creating pieces which, for the first time, consciously brought this to the fore. 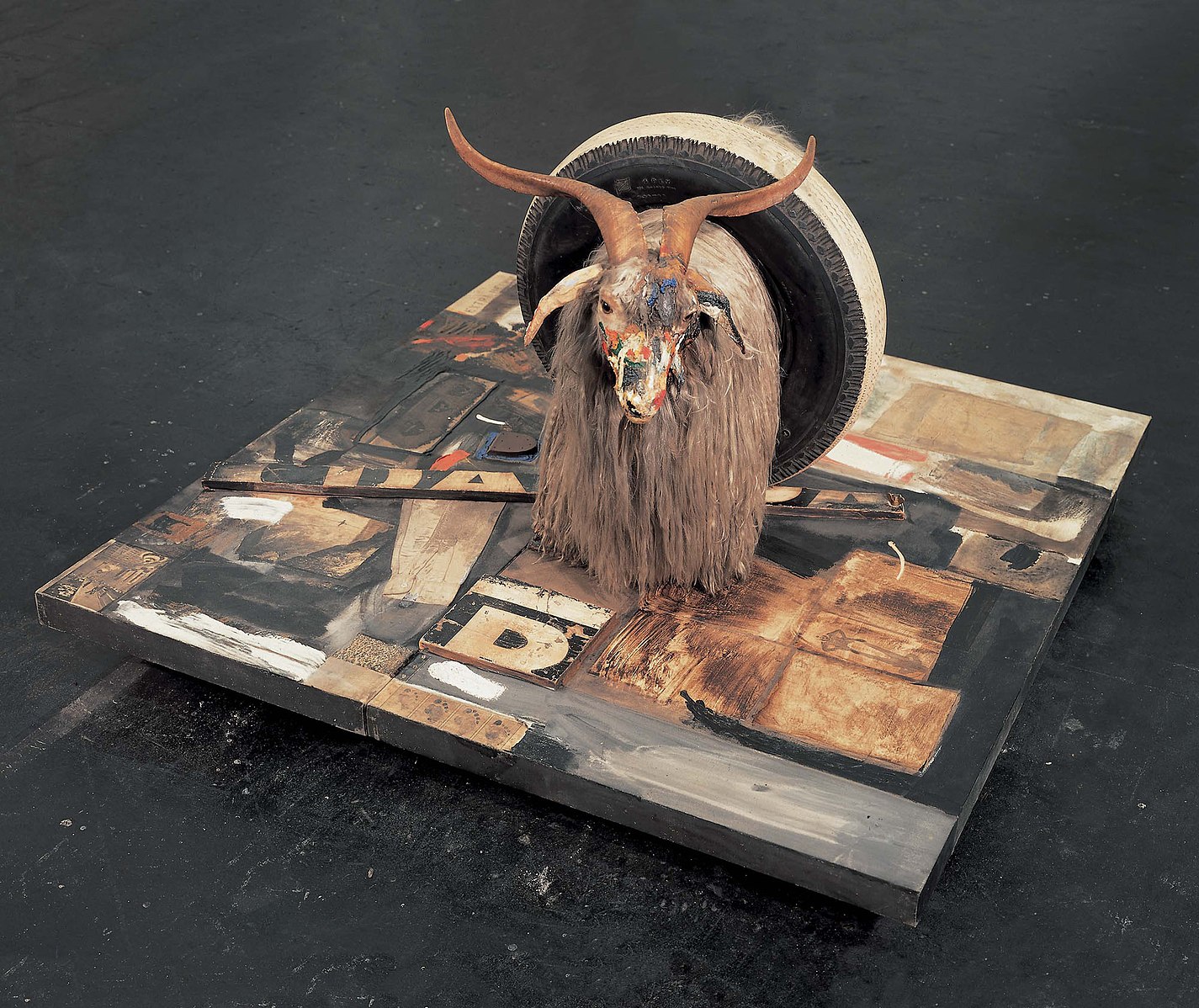 Though we’ve since come to welcome the thought-provoking, conceptual qualities of Contemporary art, this placing of the onus of constituting the meaning of the artwork on the viewer was novel at the time. Rauschenberg and Johns were subverting the pervasive idea that artists were visionaries with access to a plane out of reach to the average viewer. Instead, they worked in the language of the banal, depicting commonplace and even grotesque objects. Rauschenberg’s 1959 “Monogram”, composed of painted collage, an old car tire, and a taxidermied goat, is a striking example of this approach.

The older, more established Rauschenberg was responsible for Johns’ being picked up by Leo Castelli, the world’s leading art dealer at the time. Ultimately, this arrangement rendered Johns America’s most successful living artist, stealing the spotlight from Rauschenberg in one fell swoop. This, in tandem with emerging differences in aesthetic convictions and a progressively faltering romantic relationship, led them to part ways bitterly. It marked the precipitous downfall of a deep, heartfelt affair. Rauschenberg reminisces, “I have photos of him then that would break your heart. Jasper was soft, beautiful, lean, and poetic.”. In the end, we remember them as a passionately intertwined duo, who collided to revolutionise the world of American art.