The Psychology of Colour

FROM MINIMALISM TO MAXIMALISM

It was always going to happen one day. For some time – arguably since the late 1960s, the design world has been dominated by Minimalism. But lately, this aesthetic has started to give way to its polar opposite. The ‘yang’ is morphing into the ‘yin’, and Maximalism is now the buzz word. 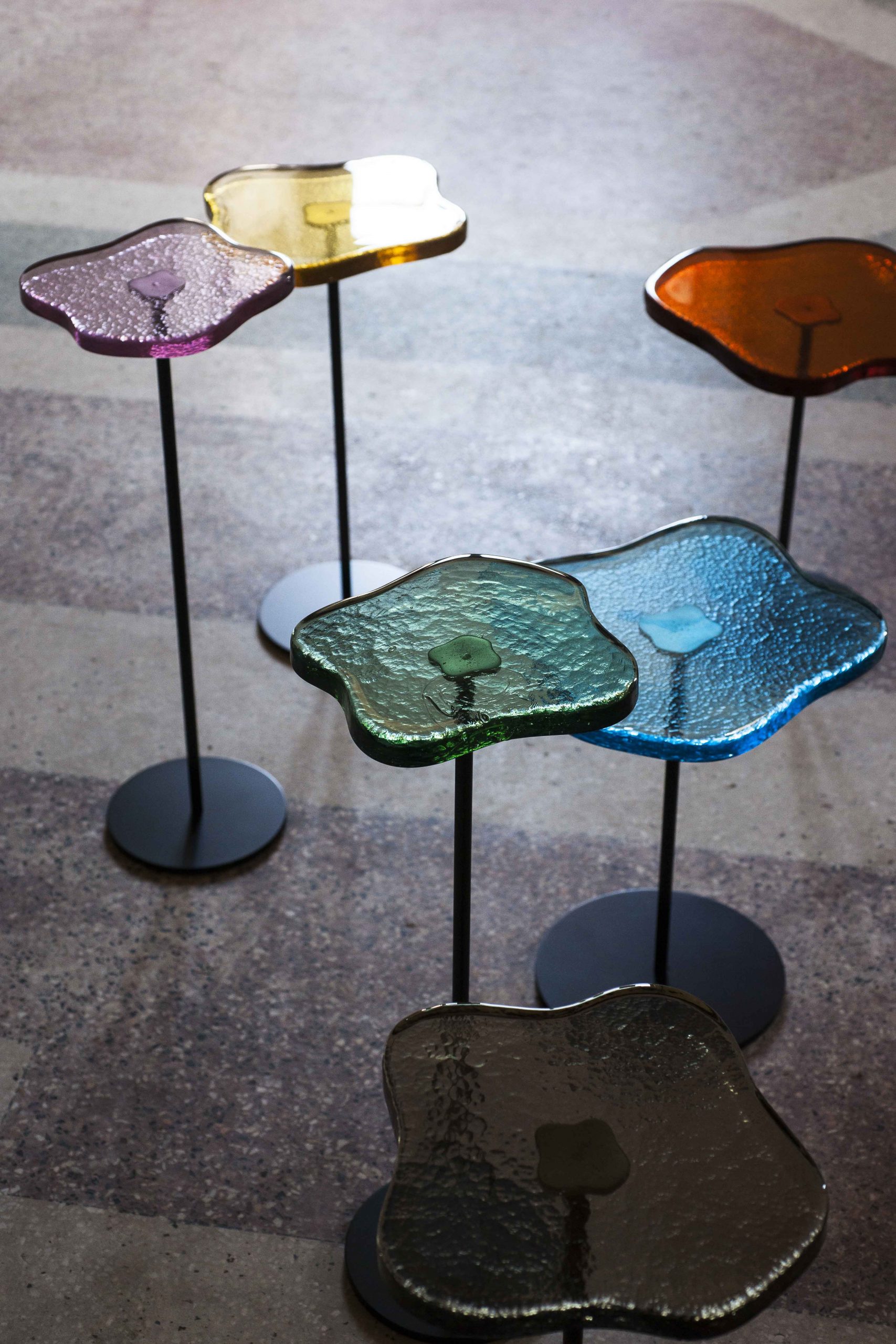 This ‘more is more’ approach is all about creating impactful environments through eclectic combinations of texture, pattern, era, and, of course, colour. The last element tends to be bold, saturated and rich. Muted tones are out. No more apologetic beige walls, unless they are made into positive features by way of contrast. 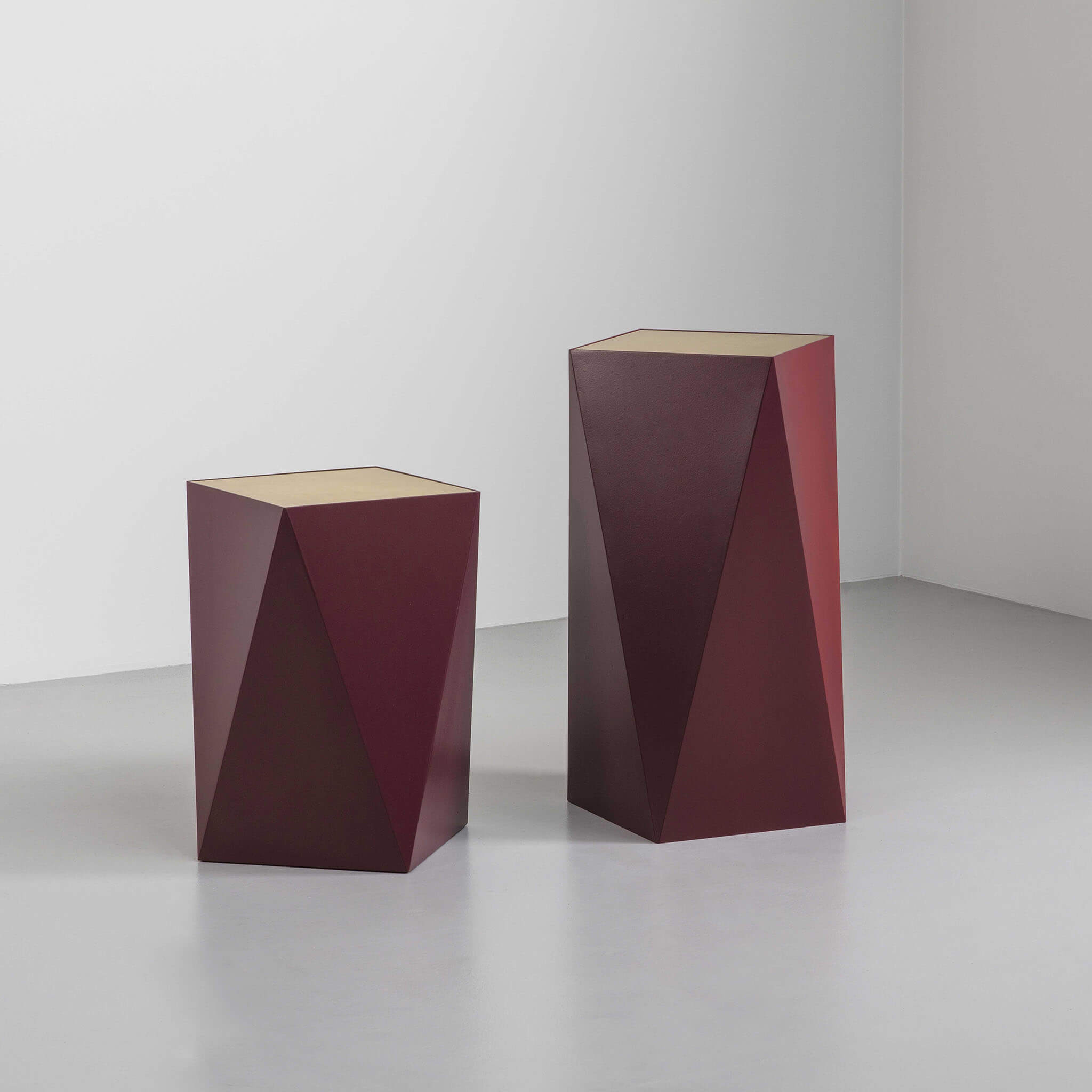 For much of his career, Tom has operated mostly at the ‘less is more’ end of the spectrum. A big fan of Ludwig Mies van de Rohe, for whom the phrase was a mantra, he has always been drawn to simple, geometrical shapes, and to letting the inherent beauty of line and proportion, and the qualities of the materials he works with sing rather than drowning them out with ornament. But he is eagerly embracing the current trend, particularly its attitude towards colour. 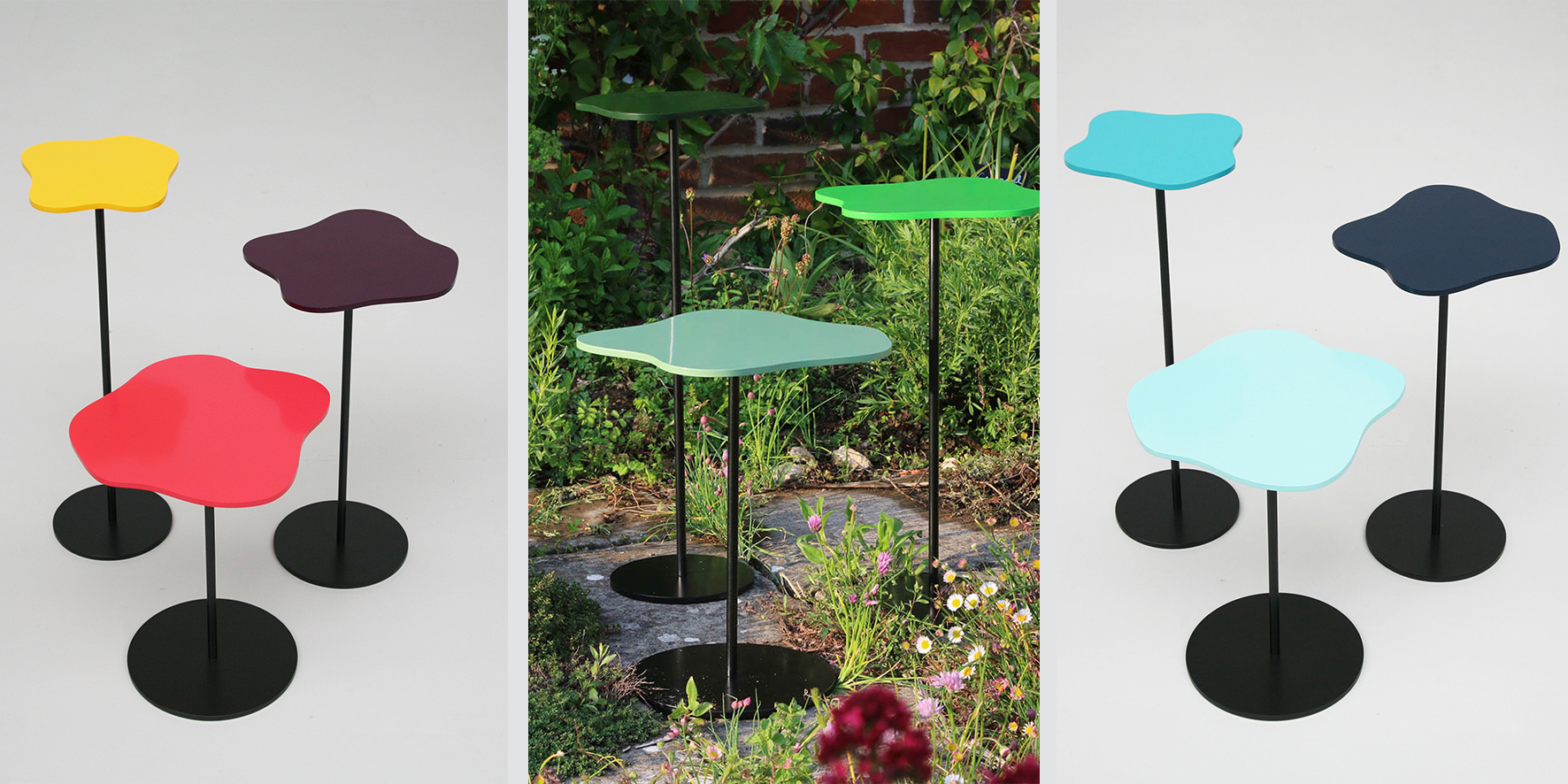 FROM LA TO TOKYO

Although he acknowledges he will have been absorbing developments in the design world by osmosis, in recent years it is Tom’s travels that have really opened his eyes to the possibilities of colour. He has drawn inspiration from the kimonos of Japan, the blazing Jacaranda trees of Los Angeles, the implausible blue of the sea of the Hebridean island of Tiree, and the red barns of Pennsylvania, as well as the bridges of Chicago. But the growing importance of colour in his work doesn’t mean he has abandoned his long-held principles. Instead, he is focusing on producing pieces that work perfectly in Maximalist settings, without sacrificing their pared-back integrity. 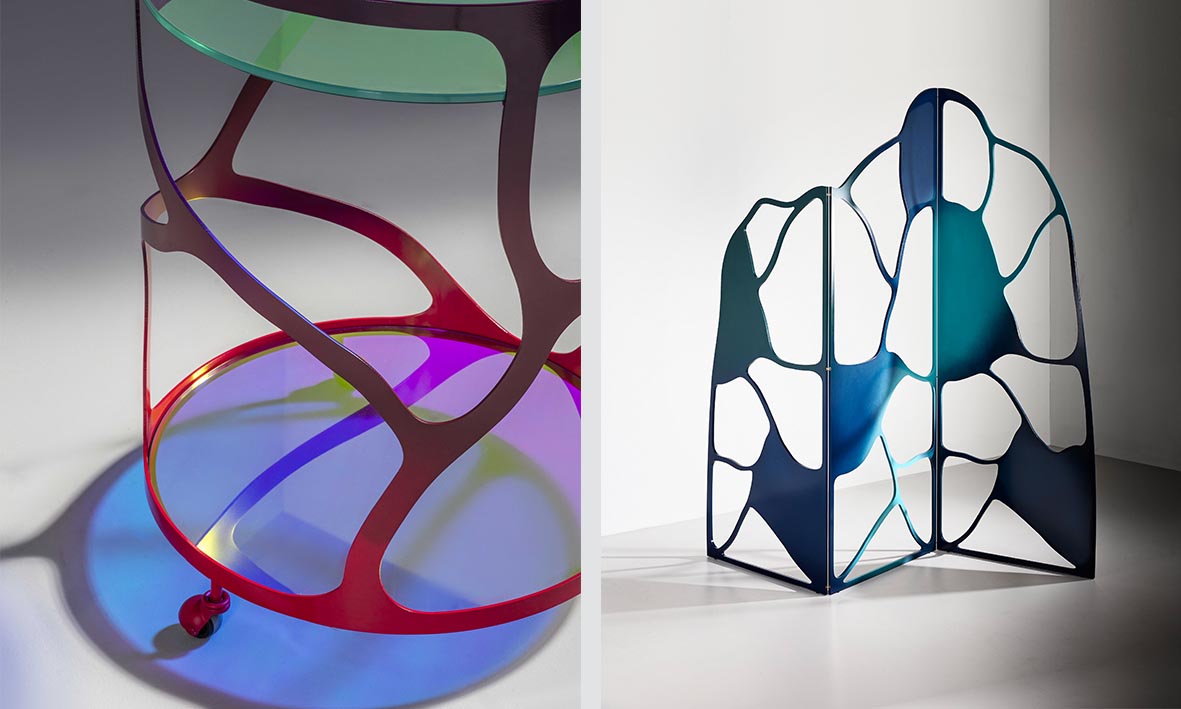 Two ranges in particular embody the recent evolution in Tom’s work. The first is Papillon, an homage to the Joshua Tree National Park in California. The organic lines of the pieces echo the veins of a butterfly, or alternatively the shapes made by the boulders that caught Tom’s eye in the desert. Equally striking are the gradated colours, which fade in and out of each other like ombré fabric. The signature hue is shimmering, iridescent Ulysses Blue. Many of the pieces also incorporate dichronic glass, which changes colour according to the lighting conditions. The other Maximalism-friendly range is Lily, evocative of the curving pads of the eponymous plants. Several of the pieces are made from hand-cast Venetian glass. When sunlight shines through them, they sparkle like gemstones, casting pools of coloured light.

This may seem like a major departure in Tom’s approach to design, but it isn’t really. Things have just come full circle. As a teenager, he alarmed his parents by painting his bedroom dark navy gloss blue (“Trafalgar Blue” from Dulux, Tom remembers) and wanting to fill it with pure white furnishings. And when he started making furniture, he was best known for his extremely colourful wooden tabletops. He is enjoying this synthesis of the different phases in his career. 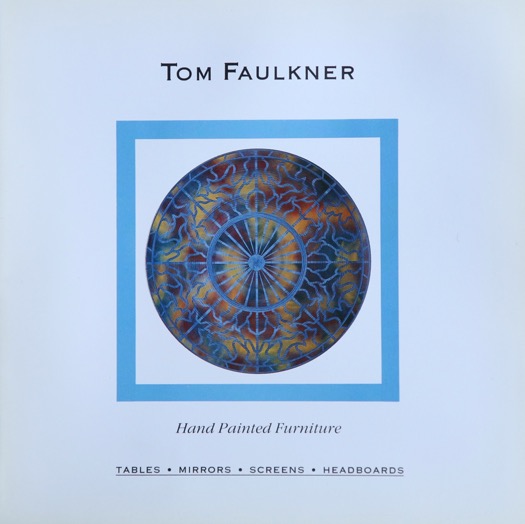 Everyone needs a bit of colour in their lives, and in the current climate, its uplifting effects can be especially welcome. But is there a science to guide us on how best to use it in our homes and workplaces? 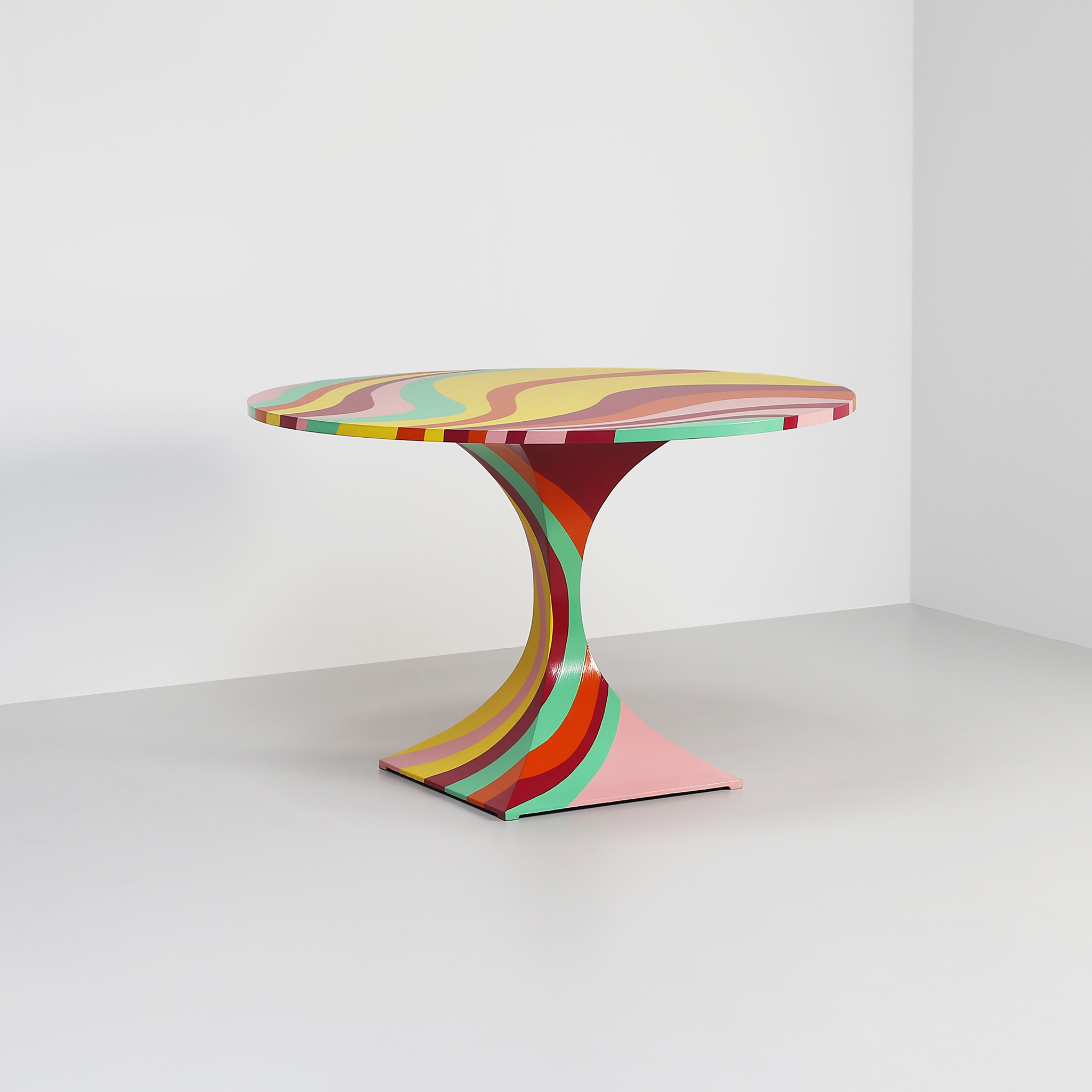 The two most important figures in the history of colour theory are Isaac Newton and Johann Wolfgang von Goethe. Newton was the absolutist of the pair. “Colours are the way they are because of measurable characteristics”, he would say. For him, they were analogous to musical notes (interestingly, just as he proved white light was made of all the colours of the rainbow, a signal containing all audible frequencies of sound is known as ‘white noise’). Whether a particular combination ‘worked’ or not was fundamentally a matter of mathematics. Goethe took the exact opposite view. An out-and-out relativist, he would say “colours are the ways they are because of how they interact with us and each other”. For him, darkness was an active quality, not just an absence of light, as Newton had drily pronounced.

There is something to be said for both the ‘scientific’ and the ‘poetical’ points of view. Even Goethe was firmly of the opinion that some combinations worked and some simply didn’t. In fact, it was him who came up with the idea of complementary colours – shades, like blue and yellow, that create the strongest contrast when placed next to each other. And he considered blue adjacent to green objectively repulsive. In the end, it’s a matter of informed trial and error.

Rachel Chudley, an interior designer who Tom particularly admires, is big on colour and might fairly be described as a Maximalist. “Colour is personal…. There is no one-size-fits-all rule.” she says in a recent edition of House and Garden. “People often assume the best course of action in a basement is to paint everything drab white. But this this can drown out a room and leave it feeling drab and dreary. Working with contrasts of light and dark, can however, give the impression of shade – naturally occurring from sunlight.” She talks of dark hallways acting as portals to bright sitting rooms, much in the same way as Frank Lloyd Wright used to make his hallways deliberately low to give a feeling of expansiveness when you stepped in to the main living area of a house.

Tom has recently painted his own sitting room green. “I read that Goethe considered this a particularly restful colour, and apparently painted all of the rooms in his own house different shades of green.” he says. “I thought: what’s good enough for Goethe should be good enough for me!” 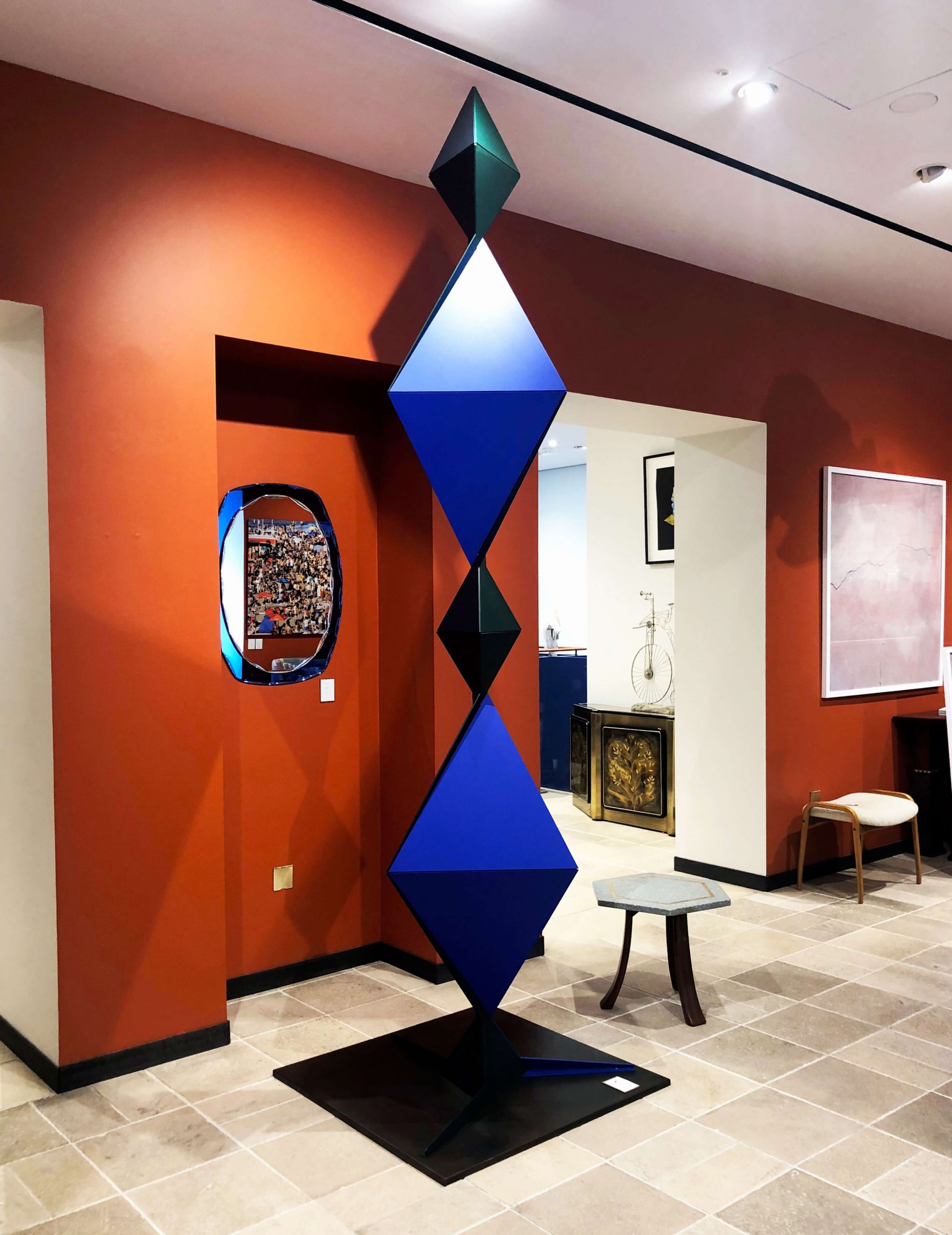 Arizona Totem made for Paul Smith 2019