Religion is among the most steadfast, enduring elements of humanity through the ages. In its myriad forms, it’s a North Star by which many lead their lives. For others it may not be a quotidian touchpoint but it’s difficult ignore the magnificent artistic and cultural contributions left in its wake. When we think of Christian architectural tradition, our minds drift to the Gothic cathedrals of France, the smalltown chapels of America, or the grand basilicas of Italy. But there’s a newer wave of religious expression on the rise. It’s given form by great Modernist designers like Le Corbusier in his Notre Dame du Haut. Artistic maestro, Henri Matisse also staked a claim with his Provençal masterpiece, the Rosary Chapel. It’s well worth mentioning Japanese architect, Tadao Ando’s Church of Light as well, which stands as a more contemporary iteration of this rejuvenated approach to liturgical architecture.

All of these unconventional designs contain a unique conception of religion as a means of creating space for improvement – for meditating on the self and carving out room to grow. Each of these great masters uses not just space but also light as a key element of their designs. This isn’t a new practice in Christian architecture. For millennia light has conveyed a sense of the divine, acting as a conduit for religious wonderment. So, these Modern designers have worked with age-old ingredients to produce entirely new architectural concoctions, which ask to be approached with an open mind and an eye to the future. 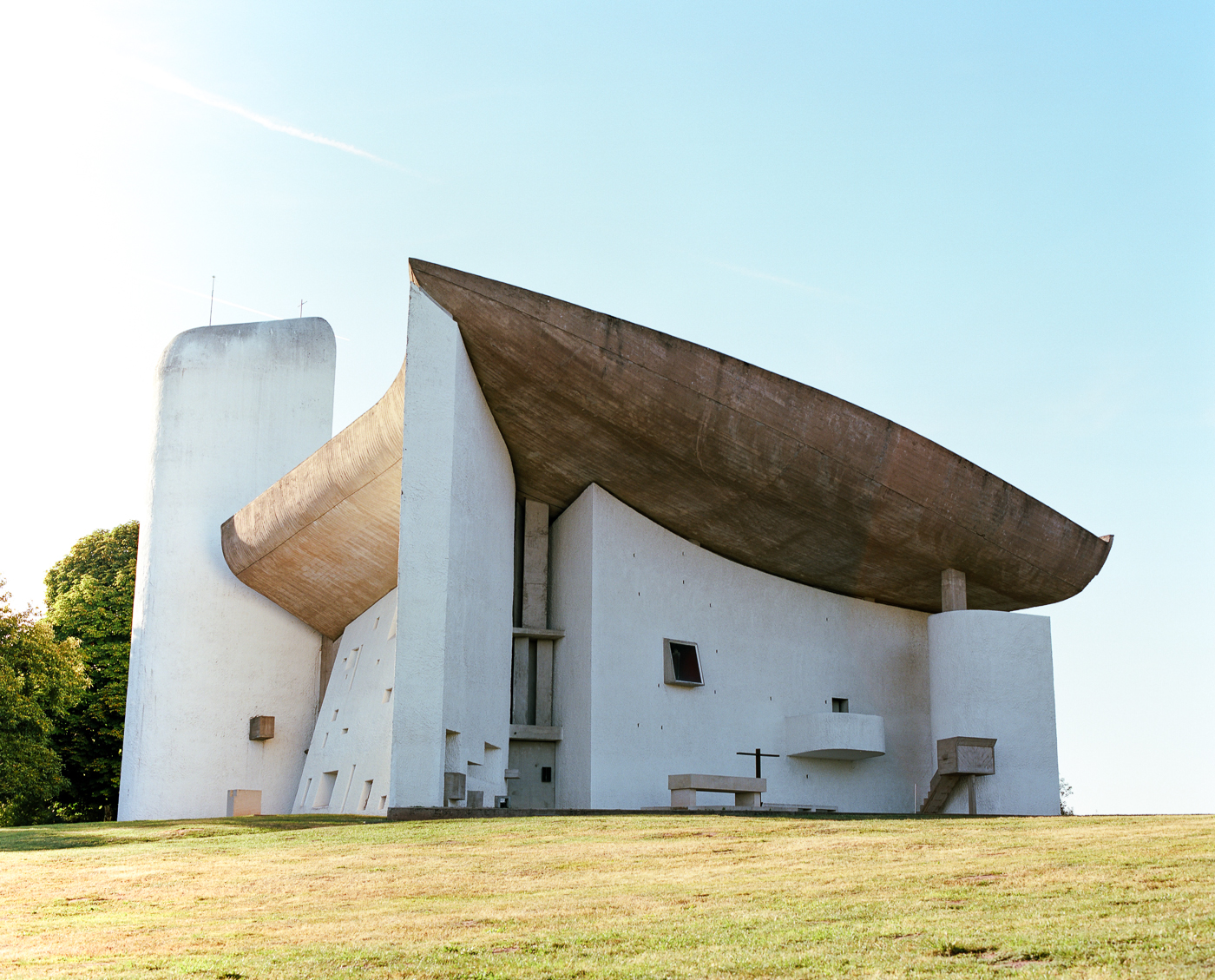 Le Corbusier’s delightfully humble design marks a departure from classic chapel architecture. The exterior of Notre Dame du Haut leaves us no clear clues as to its intended use. Though its sweeping swathes of concrete and stone rest together to form something of a refuge. There’s also a purity to the smooth white structure that swoops up towards to the heavens. 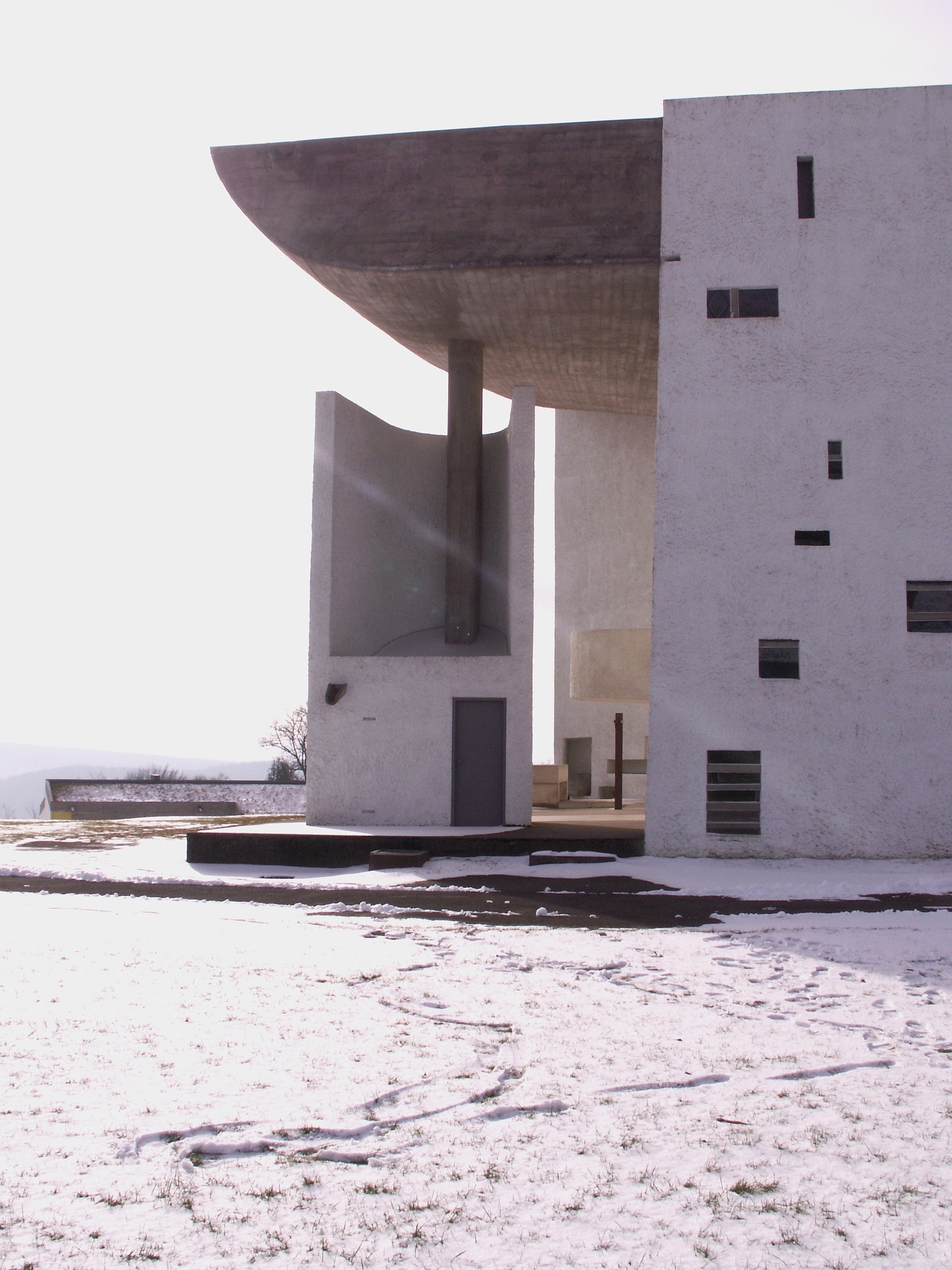 Le Corbusier was a staggeringly multifaceted designer, working with furniture, architecture, and even urban planning. Creating a chapel might have seemed off-piste even for him, though he went on to design quite the collection of religious buildings. This project began to take shape in 1953 when he was approached by the Association de l’Oeuvre Notre Dame du Haut to replace the original fourth century chapel, which was destroyed in the Second World War. I’m not sure it would be right to characterise what he came up with as a ‘replacement’ as it marks the advent of a distinctly new language of religious architecture. Le Corbusier did, however, pay homage to the site’s original chapel, incorporating fragments of the rubble into his new south wall. 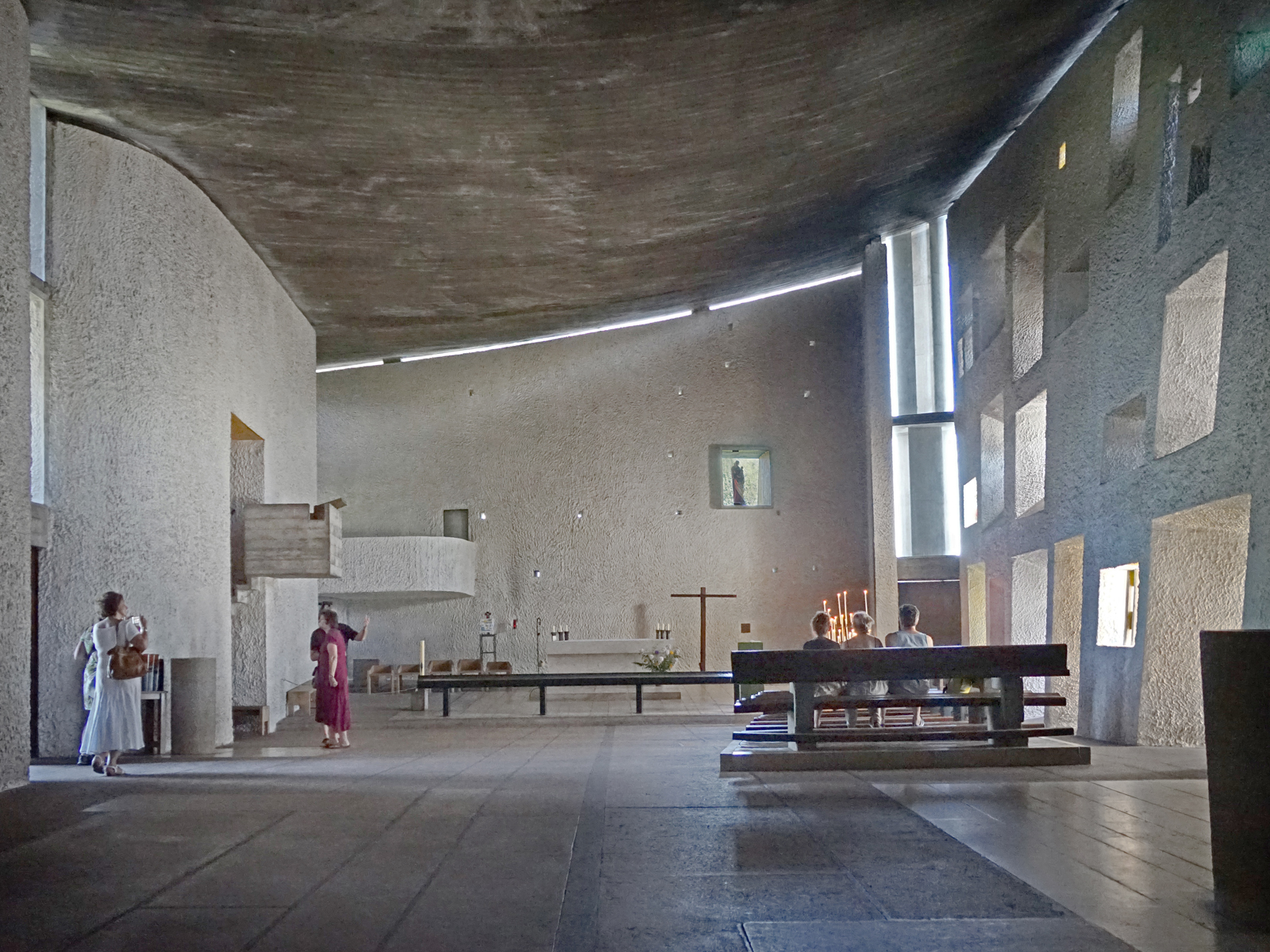 From the outside there’s a striking sense of scale and solidity to Notre Dame du Haut. Internally, the dense, citadel-like walls of the chapel seem to breathe, letting in a surprising wealth of air and light, which reverberates through the space, leaving visitors to find it in unexpected places. Bright rays filter in through sloped openings, beaming in various directions and filling the space with a unique visual interplay. The windows take on myriad hues and patterns, with stirring snippets of writing, like “etoile du matin”, or “morning star”. The result is a felt sense of warmth and personality, met with wonderment in the minutiae of Le Corbusier’s enveloping design.

There’s a haptic, hand-crafted quality to the chapel’s design, which marks a departure from Le Corbusier’s characteristic machine-age sensibilities. He was informed by the context of the building within eastern France’s idyllic countryside, and moved to create something with a Franco-Swiss bent and a decidedly unique personality. 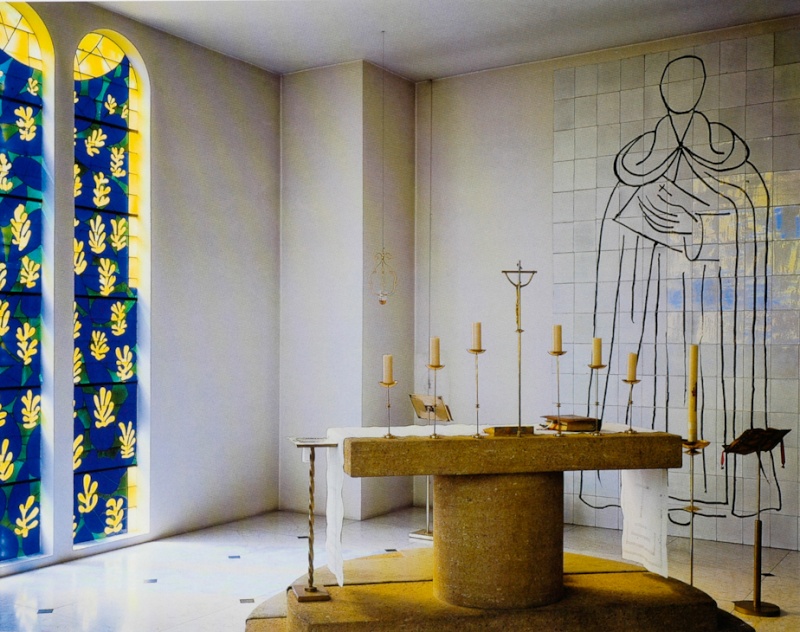 The Rosary Chapel, better known as ‘the Matisse Chapel’, is a joyful expression of the religious experience, resting, for Matisse, in nature and personal connection. The diminutive Catholic chapel took shape in the Provençal town of Vence between 1947 and 1951. Upon its completion, Matisse dedicated the chapel to the Dominical Order in honour of Monique Bourgeois, the nurse-cum-Dominican nun who cared for him through his bout of stomach cancer. Matisse and Bourgeois first crossed paths when she answered his ad for a “young and pretty nurse”. They developed a bond and when she moved to the convent at Vence, Matisse later followed suit, taking up residence in nearby Villa le Rêve. They met often and eventually, she asked if Matisse might help with the design of a new chapel. It was an entirely novel challenge for him, which ultimately produced what the artist considers his masterpiece. 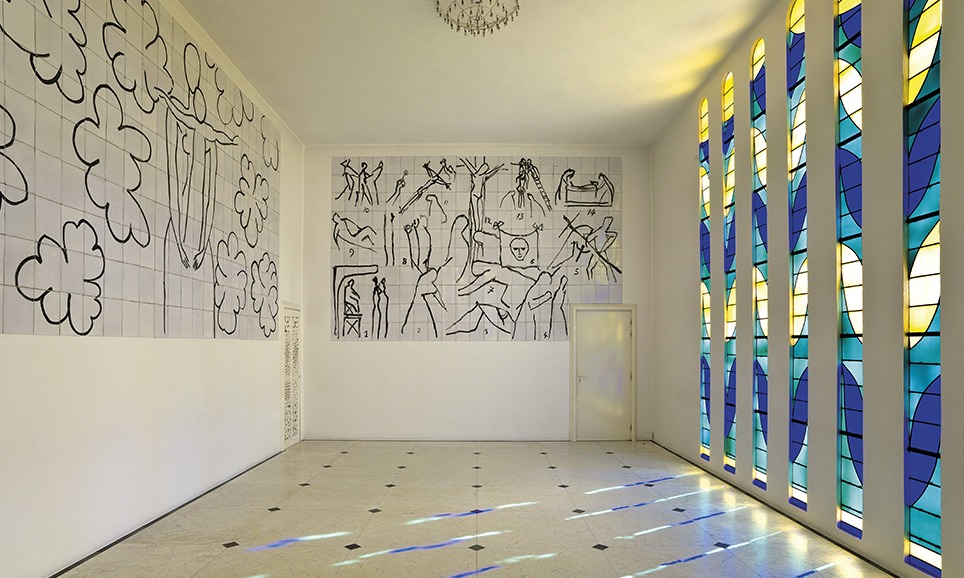 Matisse transcended the bounds of particular religious expressions and, instead, tapped into the universally felt potentiality of space and light. He carved out an expansive environment flooded with luminosity, which he further accentuated through his use of vibrant colour and pattern. He created the conditions he believed were best poised to present opportunities for constructively communing with oneself and ones God. 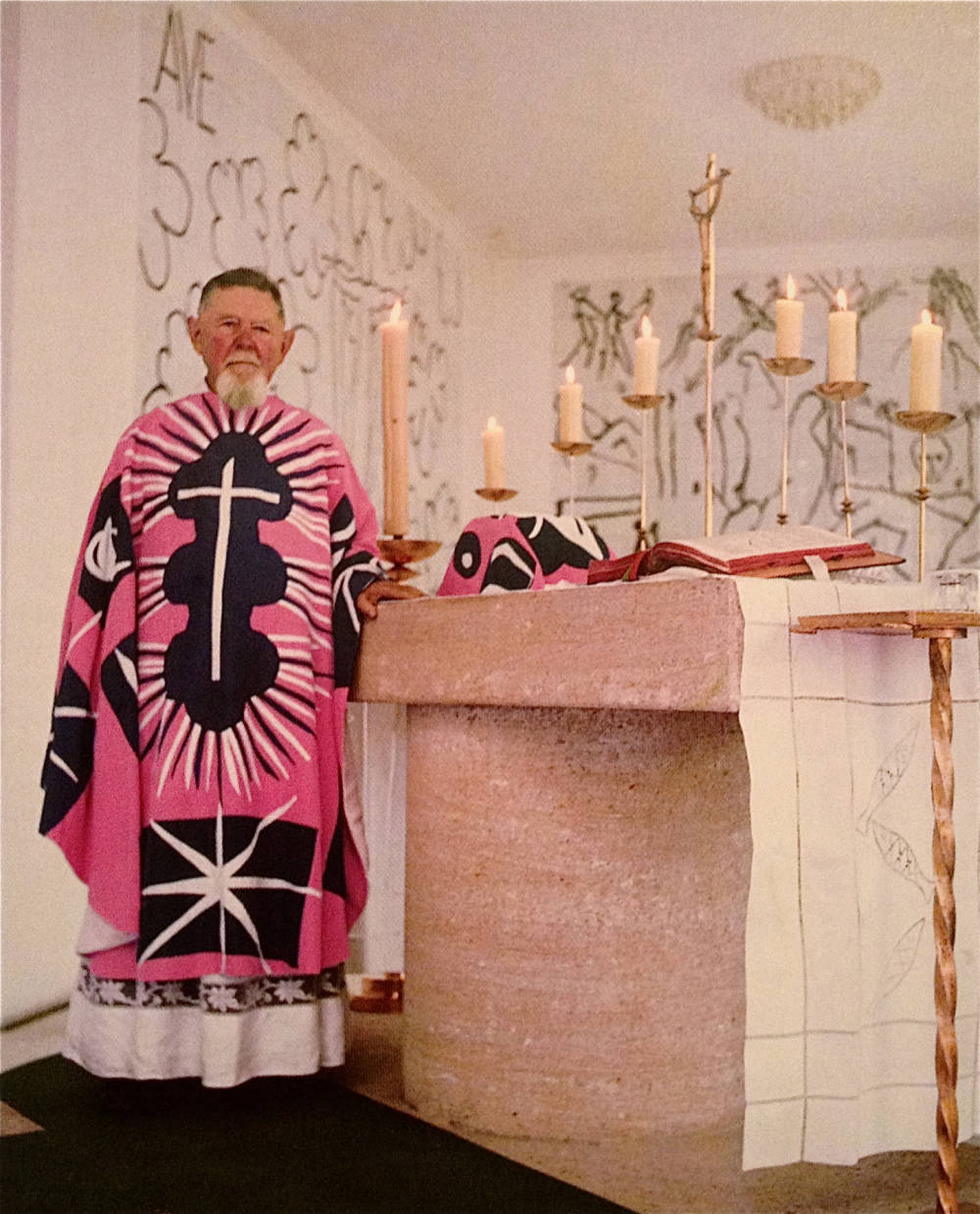 Henri Matisse’s designs in the Rosary Chapel, including a chasuble, altar, candle holders, and painted tiles

Matisse took the utmost care in even the smallest of the chapel’s details, from the stone altar down to the bronze candle holders. He even designed the vestments, spinning the traditional colour palette into fantastical patterns which echo the motifs throughout the interior.

Natural themes also served as a unifying basis for many of Matisse’s designs, tapping into a common language which is universally evocative. He conjured this organic influence by using themes like leaves and clouds. These motifs also found expression in Matisse’s limited colour palette, which married natural and religious references. Green represents vegetation, yellow stands for the sun, and blue is tied to the Mediterranean Sea, the Riviera sky, and the Madonna. 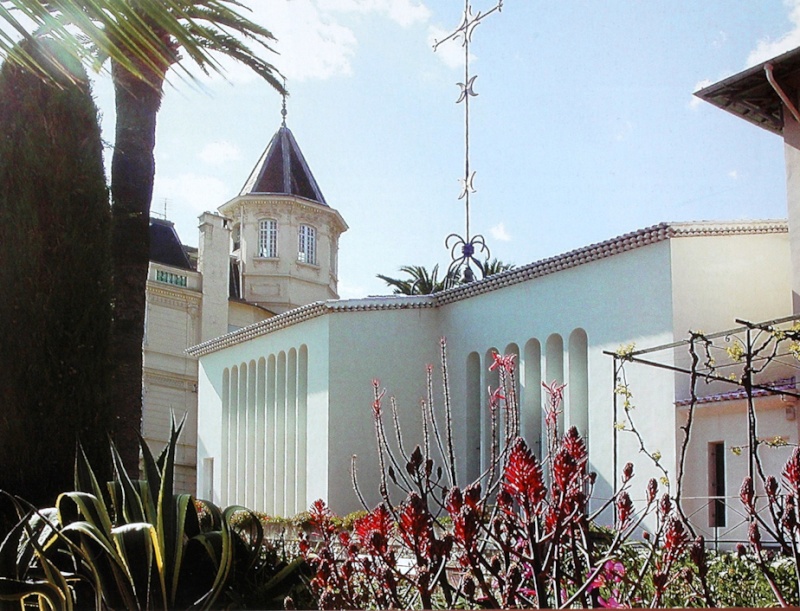 It was through nature that Matisse connected with spirituality, remarking, “At the moment I go every morning to say my prayers, pencil in hand; I stand in front of a pomegranate tree covered in blossom, each flower at a different stage, and I watch their transformation. Not in fact in any spirit of scientific enquiry, but filled with admiration for the work of God. Is this not a way of praying?” The Matisse Chapel is a poetic expression of the artist’s relationship with spirituality and a call to find and cherish meaning in whatever it is that speaks to you. 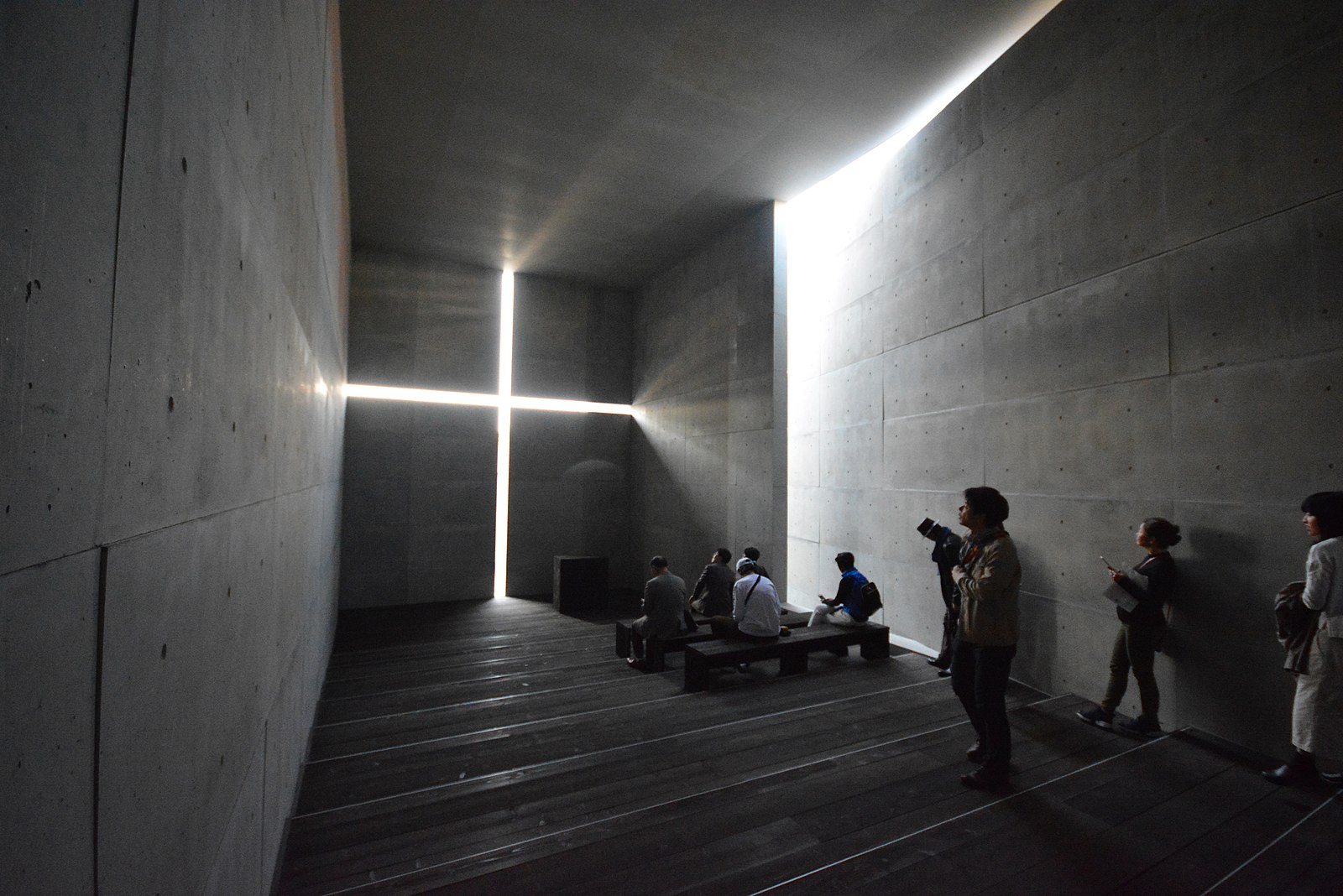 Tadao Ando’s infamous Church of Light was built in 1989 in Osaka’s residential Ibaraki neighbourhood. The church has a relatively compact design, no bigger than a typical house. It was initially planned as an added element to the original wooden chapel and minister’s house but has since become the central point of worship, with its own Sunday School added in 1999. 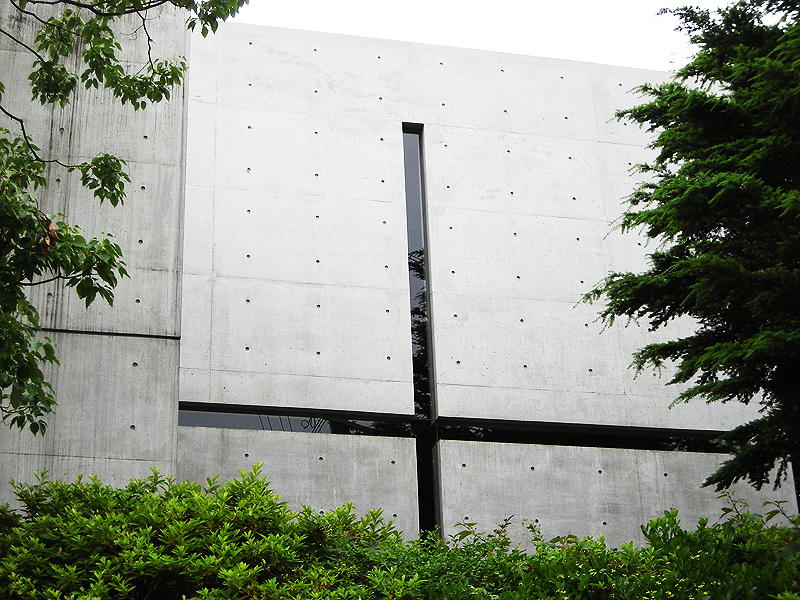 The church is made of concrete cubes, with interior elements like the benches and floorboards composed of re-purposed scaffolding used during construction. It’s a stark, minimal building, almost entirely devoid of ornament. The power of the design lies in its formal elements, largely represented by its defining feature, the cruciform. The cross is cut out of the worship hall’s imposing concrete wall, whereby light is given a way into the solid box-like interior, bursting into the darkness and providing a focal point in the space. 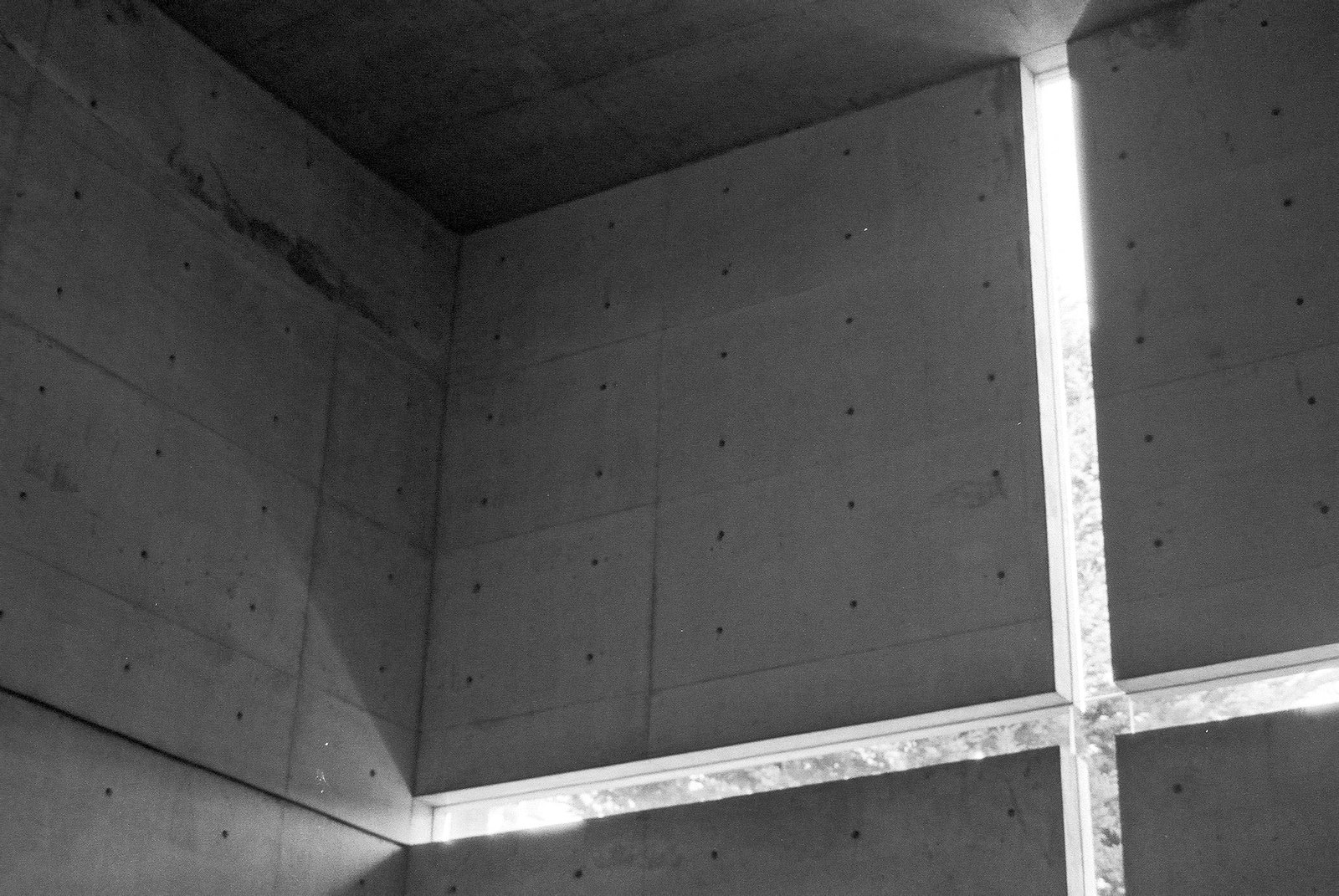 It’s not uncommon for Ando to work with Zen philosophies in his designs. The Church of Light embodies ideas surrounding the dual nature of existence, pitting light and dark against one another to evoke a beautiful sense of tension between the two opposing, yet inherently inter-reliant elements. This interplay between light and darkness emerges from Ando’s expert juxtaposition of solidity and emptiness in the form of the structure. These notions echo the dualistic quality of those who enter the church as incarnations of earthly rigidity and immaterial spirit. So, Ando’s conception of space as a container for spiritual opportunity echoes Matisse’s beliefs, yet informs his design in a different way. The cruciform becomes the locus of the intersection between secular and spiritual, fostering a meditative approach to spiritual experience. 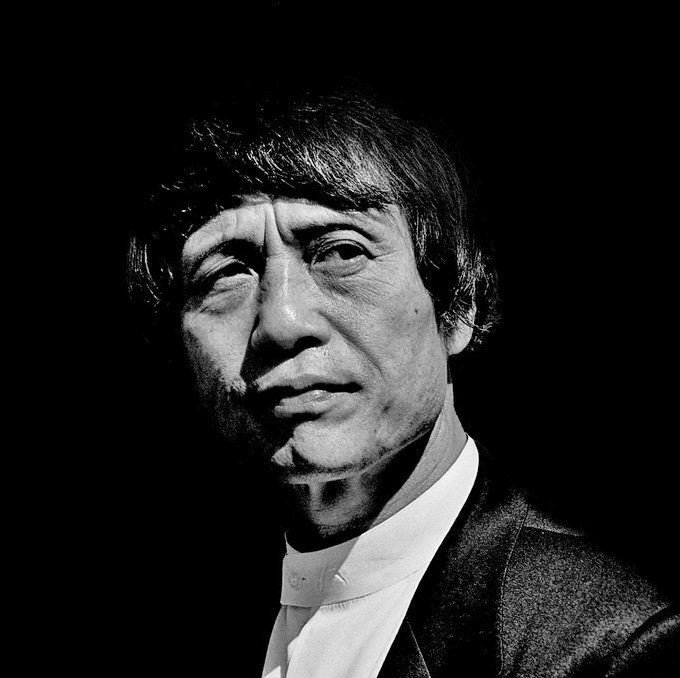