It’s about time Remedios Varo had her moment in the sun. Recently, this Spanish painter has set the art world ablaze with her captivating Surrealist works. She conjured worlds that buzz with mind-bending machines, philosophically charged characters, and spectacularly inventive furniture designs. Much of Varo’s unique creative approach stems from her eclectic upbringing. She was born in 1908 in the Catalan province of Girona, Spain to a free-thinking, inquisitive father and a dedicated Catholic mother. Varo’s father was a hydraulic engineer who recognised her artistic talents early on, encouraging her to copy his technical drawings. As such, she developed a strong sense of the mechanics and physical compositions of the objects around her, paying close attention to the manner in which form came to function. These functional elements of her world came to figure heavily in Varo’s art, emerging in the forms of machinery and furniture. Her father also introduced her to philosophy, mysticism, and fantastical literature at a young age, fostering an inquisitive, imaginative perspective on the world. Admirers of Varo’s work will note elements of these varied formative influences woven into the fabric of the fantastical worlds she’s become celebrated for. 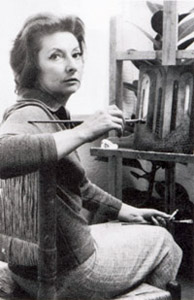 Varo developed a passionate interest in art as a channel for the deeper human experience. The esoteric figures heavily in her work, appearing alongside allusions to her Catholic upbringing. She embraced the works of Swiss psychoanalyst, Carl Jung and Russian mystic, George Gurdjieff with equal fervour, symbolically folding their ideas into her art. To Varo, these were both paths to a more complete understanding of the self as well as means of transforming consciousness. 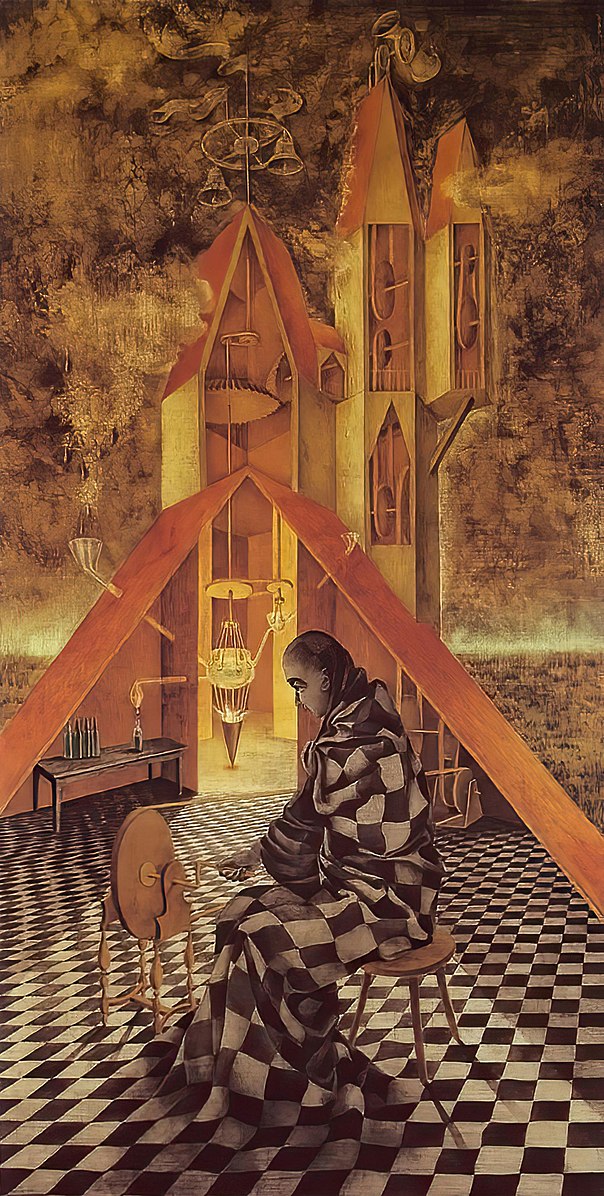 Remedios Varo’s Useless Science or The Alchemist (1955); photographed by Astarmarket

Varo shared this intellectually and spiritually driven approach to art with British-born Surrealist, Leonora Carrington. The two artists were introduced by André Breton while they were living in Paris and quickly developed a bond. Their friendship deepened when they both moved to Mexico City following the Second World War. Here, Varo found a broader circle of similarly inquisitive minds that invigorated her work with a greater sense of whimsicality than ever before. Varo came to acknowledge a close interconnection between the human, animal, plant, and mechanical worlds. To her, we are all part of this shared mercurial existence, a notion that rings through her artistic creations. 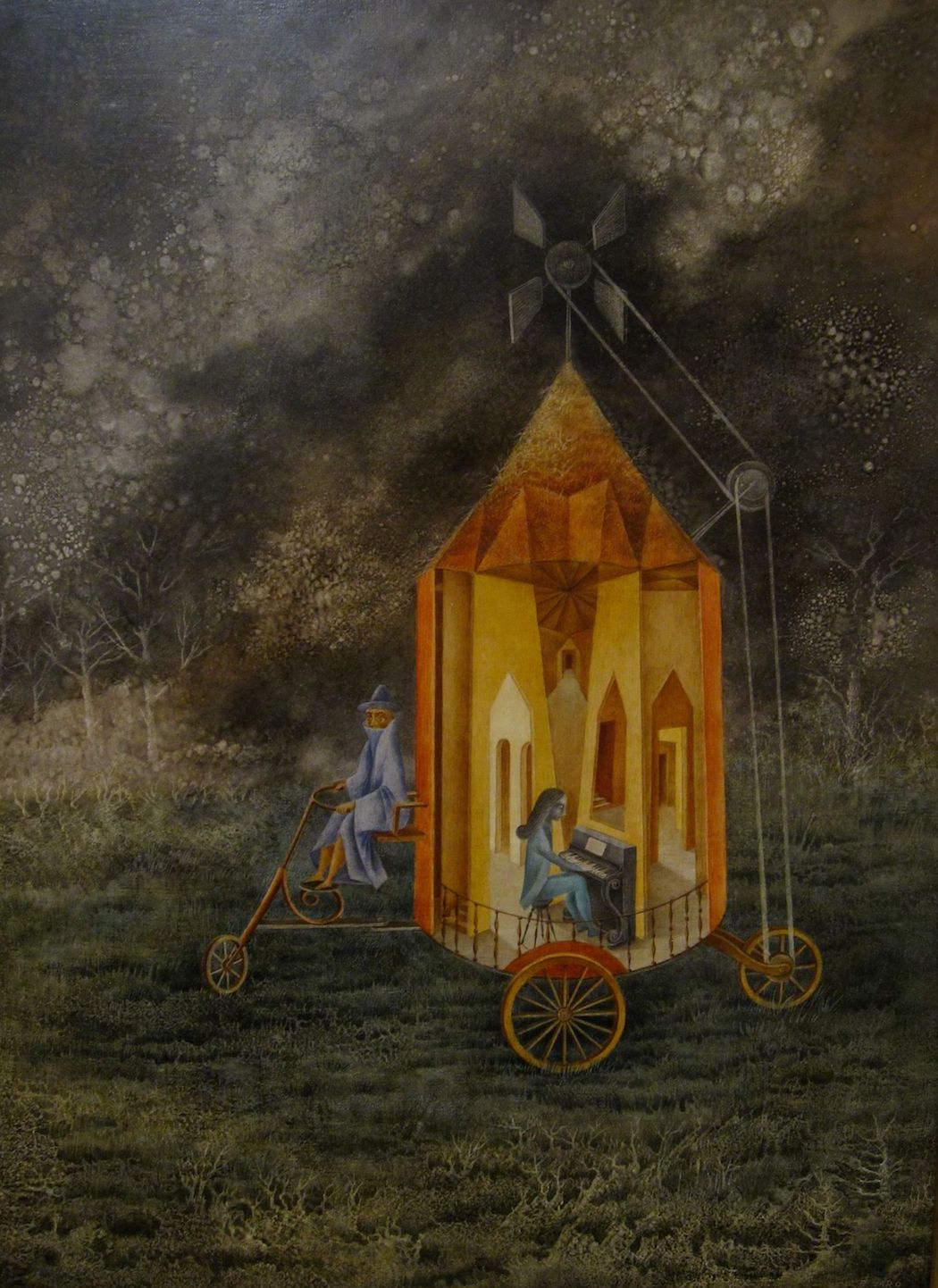 Works of machinery and furniture can be understood as grounding features in Varo’s otherworldly scenes. Childhood travels with her family proved influential in her work. She depicts elaborate vehicles traversing fantastical lands, lending viewers an element of mechanical familiarity which they may board as vessels into her ornately spun universes. Similarly, her imagined furniture pieces act as anchors of reality in the alien worlds of her art. 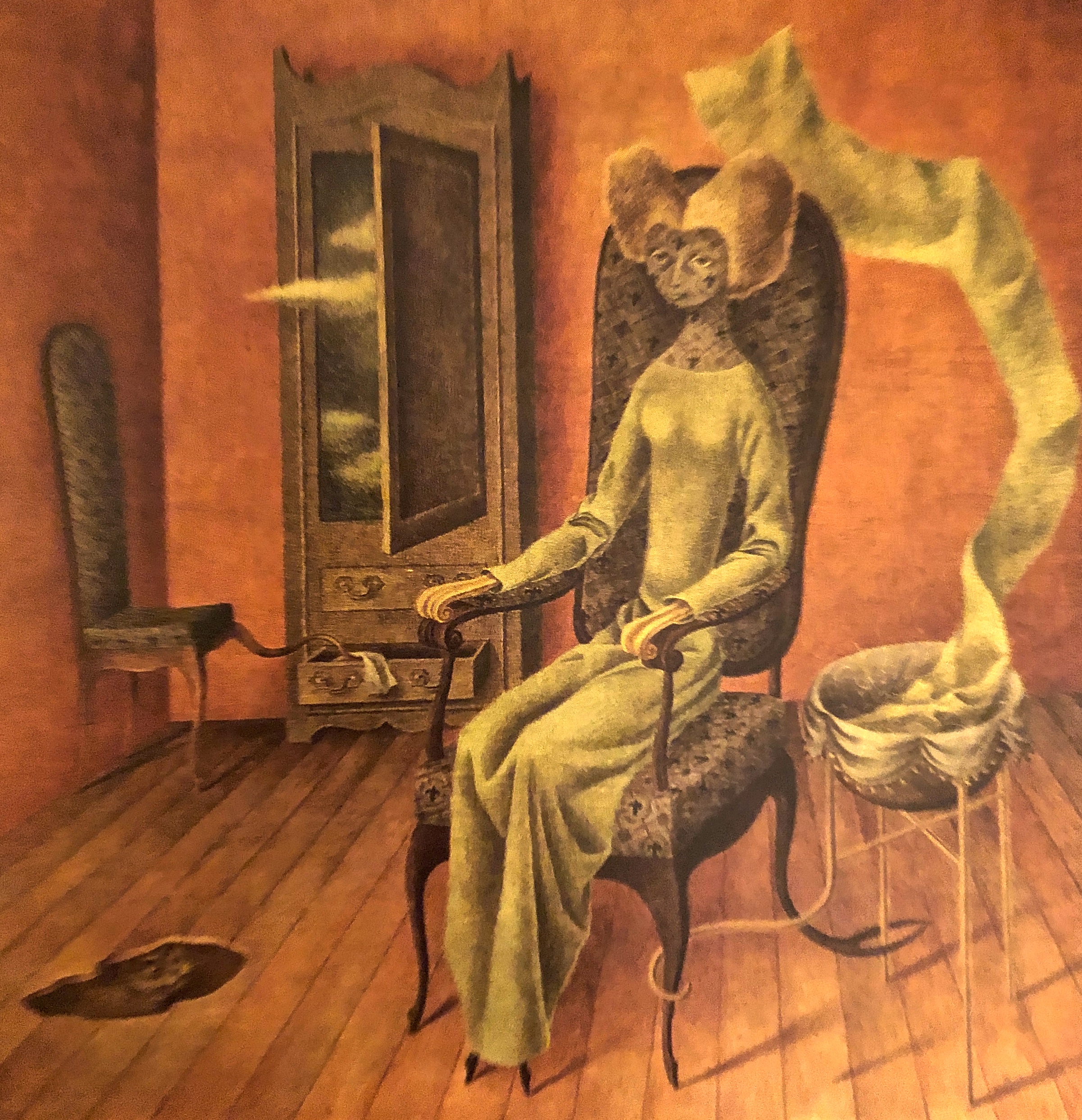 In many cases, the furniture in Varo’s work takes on a life and an agency of its own. She personifies the furniture at times, even endowing it with a mystical mischievousness, as in her 1960 painting, Memisis. Side tables reach their legs out to grab hold of surrounding furniture; chair legs go rummaging in drawers after who-knows-what. Equally, the seemingly human characters in Varo’s work morph into furniture. They sprout armrests for hands and chair legs for feet, taking on the patterns of surrounding upholstery so that they sink into and almost become the seats they sit in. Nothing is quite what it seems; yet nothing has fully transformed into its final incarnation so it’s difficult to impose a definite identity upon any element of her works. Varo captures moments of transigence, a world and its characters constantly in flux, the artwork a swirling eddy lingering between the animate and inanimate. 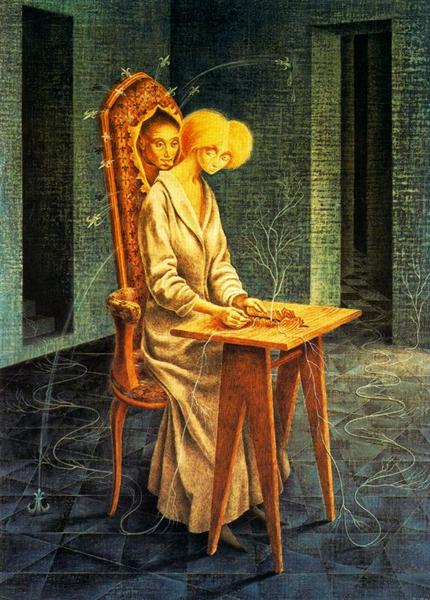 Another fine example of the mercurial nature of Varo’s furniture designs appears in her 1959 work, Disturbing Presence. Something of a human incarnation emerges from the chair, casting off the upholstery’s fleur-de-lis pattern and emerging, tongue outstretched as it creeps up behind the sitter. The woman works, or rather, conjures, at a Jeanneret-esque scissor-legged desk, coaxing an ethereal tree from the wood, engineering the furniture piece’s cyclical return to its origin. 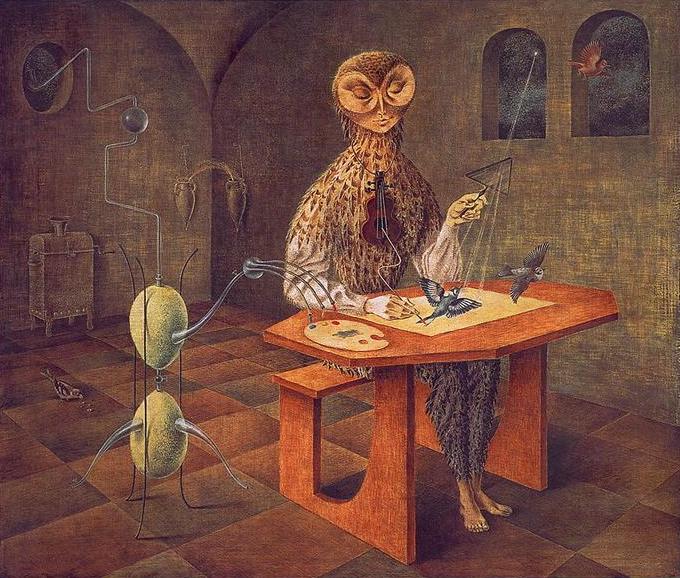 Many of Varo’s furniture creations are truly original works of design. The table-bench combination holding centre stage in her circa 1957 painting, The Creation of Birds takes on a beautifully functional cantilevered form. The furling format of the furniture piece emphasises the cyclical notion of becoming which is evident in the artwork. The creator is, through the practice of creating, building herself. As such, the creator of birds becomes, herself, a bird.

This fascination with the act of creation echoes throughout Varo’s oeuvre. Her work stands out in the grand scheme of Surrealism as it largely features women in these formative roles of agency, as opposed to as passive objects of admiration. She showcases many women as the grand architects of her universes, crafting their elements, furniture, and even animal inhabitants. In this respect, she found inspiration in the work of her colleague, Wolfgang Paalen, which delved into the matriarchal origins of civilisations, dating to pre-classic Europe and pre-Mayan Mexico. Varo was a pioneer in countless senses of the word, and the chimerical originality she brought to her painted furniture designs is one that’s a joy to explore. 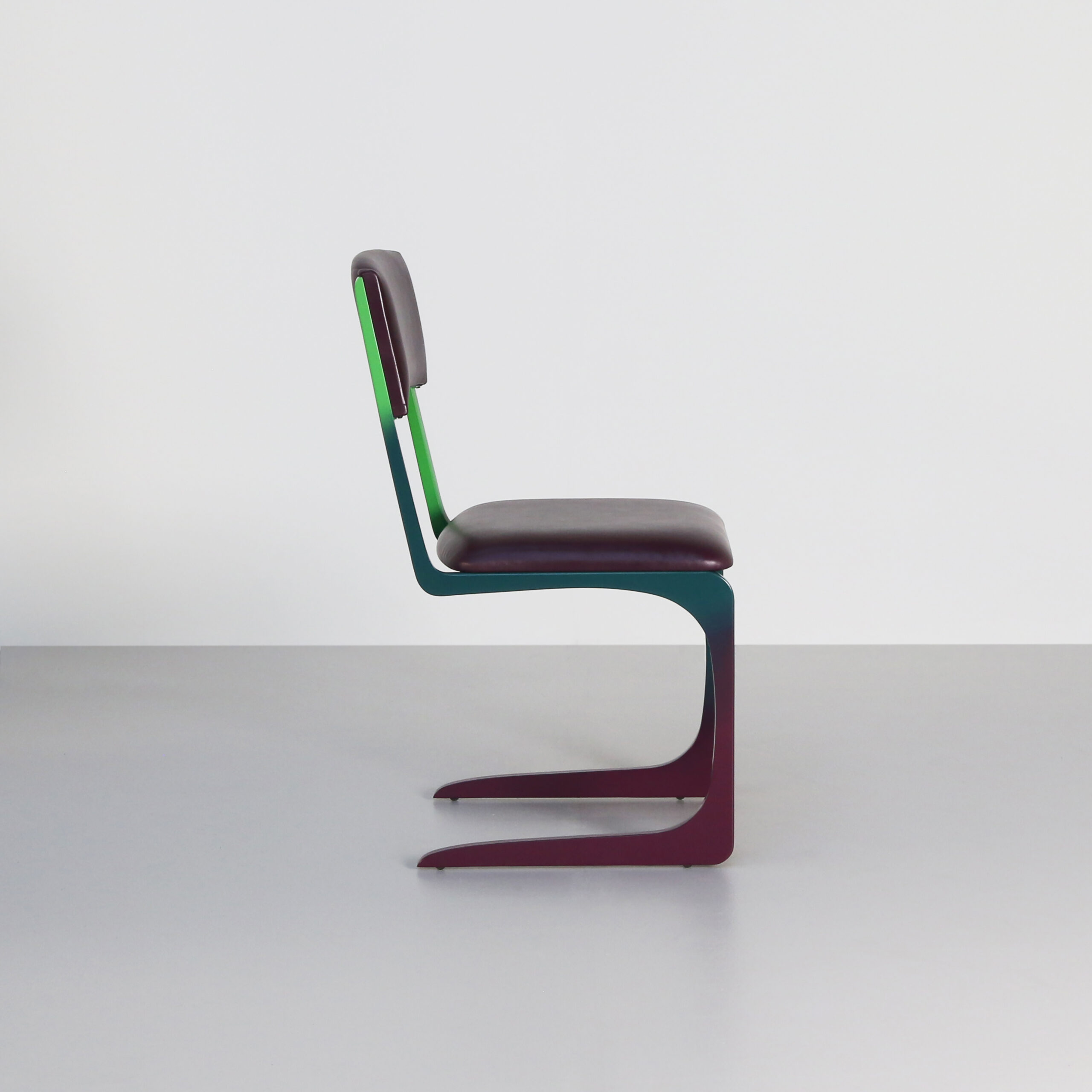 There is a breath of Varo-esque whimsicality in Tom’s Angel Dining Chair, coloured in a vibrant Mariposa finish. This cantilevered design speaks to Varo’s original approach to engineering form. It’s a piece that taps into the sense of wonder and imagination streaming through Varo’s work.

Please note, we have no reason to believe the Angel Dining Chair will spring to life if left unattended (though this theory has not been expressly tested).