Ten of the Best Buildings in London

As a London-based company, we have the privilege of being surrounded by inspirational architecture on a daily basis. Tom splits his time between city and country, finding splinters of beauty in these vastly different landscapes. Modern architecture has fed many of his designs; though, so too have marvels of Brutalism like the Barbican and engineering innovations such as Paddington Station. With such a wealth of creative expression, it’s difficult to winnow down to a definitive top ten. Though, as a starting point, we’ve collected some of our favourites in the hope that you, too may find a spark of inspiration in these iconic buildings of London… 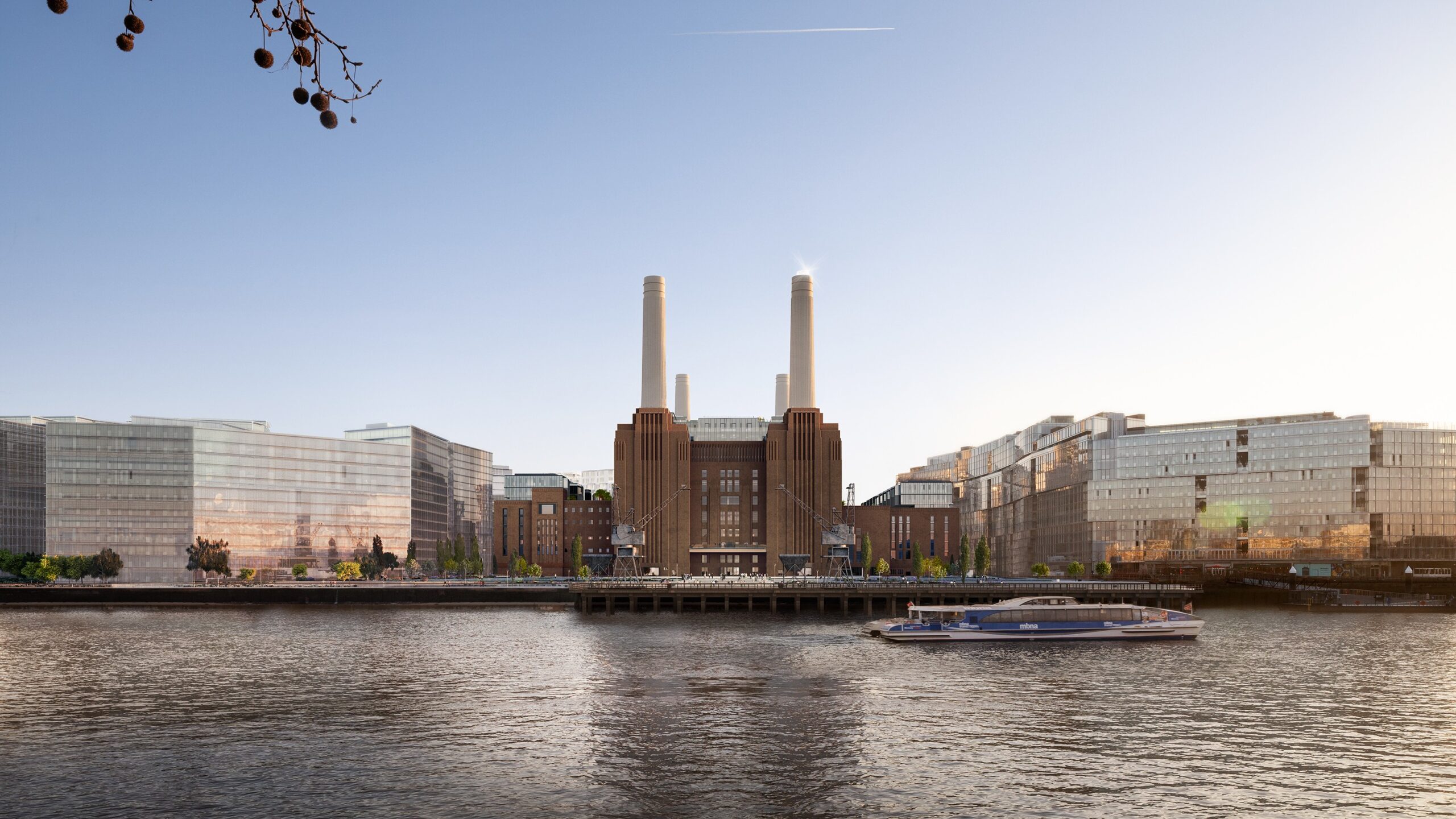 This iconic piece of the south-west skyline first took form as a coal-fired power station at the hands of Leonard Pearce, J. Theo Halliday, and Giles Gilbert Scott in the 1930s. It was then the largest brick building in the world, renowned for its striking Art Deco interiors. In those days it supplied a fifth of London’s power, but the times moved on. The building was decommissioned and sat quietly for decades despite achieving Grade II listed status in 1980. It wasn’t until 2014 when the station was at the brink of dereliction that Malaysian investors stepped in with a plan to transform the place into a thriving community hub. Today we find Battersea Power Station in the end stages of this metamorphoses, with a vast collection of shops and restaurants as well as a hotel converging with residential units and beautifully designed common spaces. With Norman Foster and Frank Gehry at the helm, it’s gearing up to be a pretty spectacular site.

Façade of the Natural History Museum

The Natural History Museum first opened its doors in the spring of 1881, though its history stretches back to the 1700s. The collection of Sir Hans Sloane formed the core of the treasures on display, initially taking up residence in the British Museum. Sir Richard Owen felt these cherished objects deserved a home of their own, conceiving of a ‘Cathedral to nature’ which could support a grander collection of curiosities. He sketched up a plan, handing the reins to architect, Alfred Waterhouse. The building took shape in Waterhouse’s characteristic Romanesque style, using terracotta to ensure its resilience within the harsh atmosphere of Victorian London. Because the edifice was purpose-built as a museum of natural history, it’s resplendent with details like plant motifs and ornamental animals of stone. Waterhouse took great care in sketching out each of the creatures to be sculpted, running every one by Owens to ensure they were physiologically accurate. The result is a building designed with passion and care that opens our city to the wonders of the natural world. 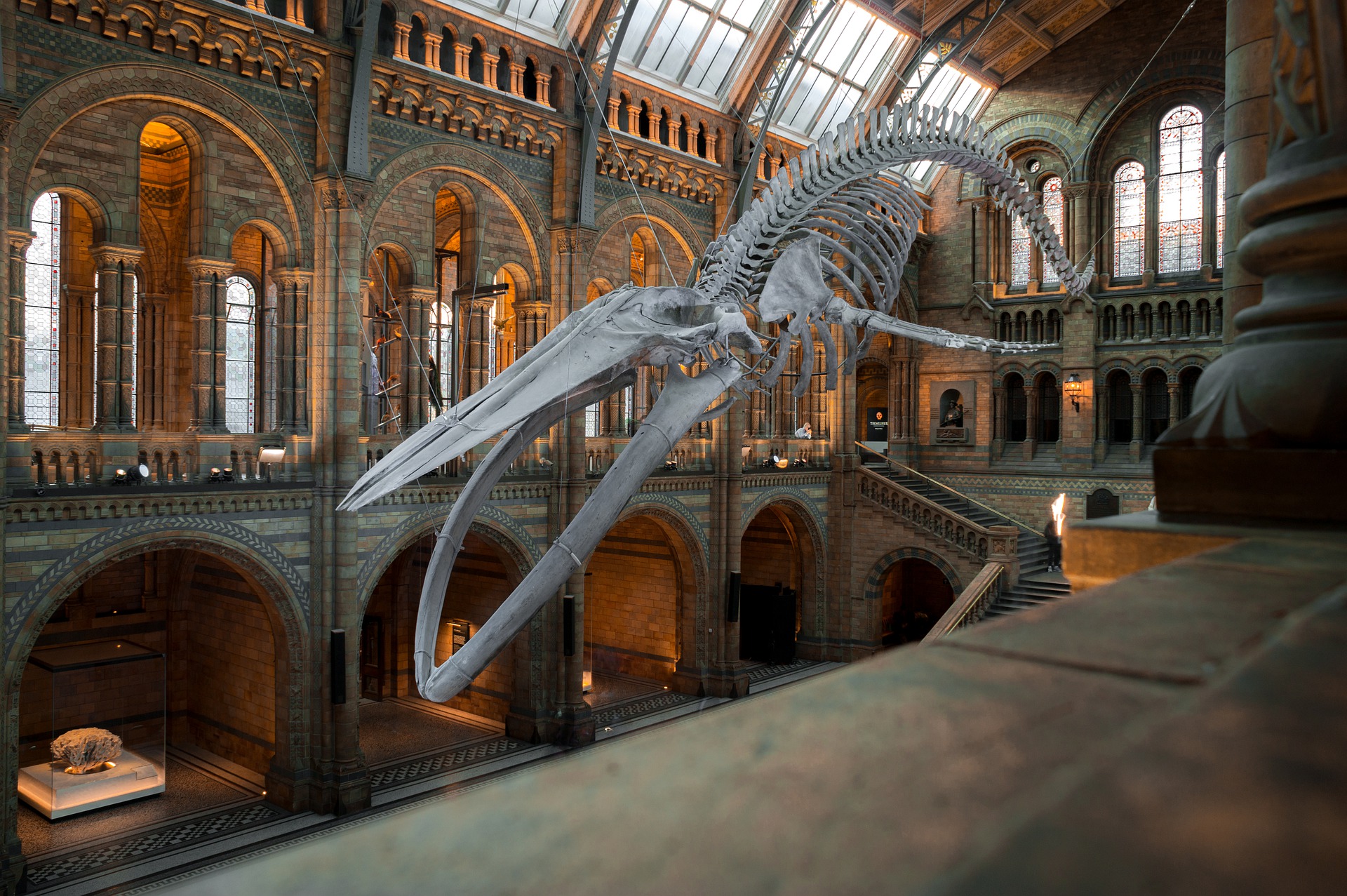 Interior of the Natural History Museum 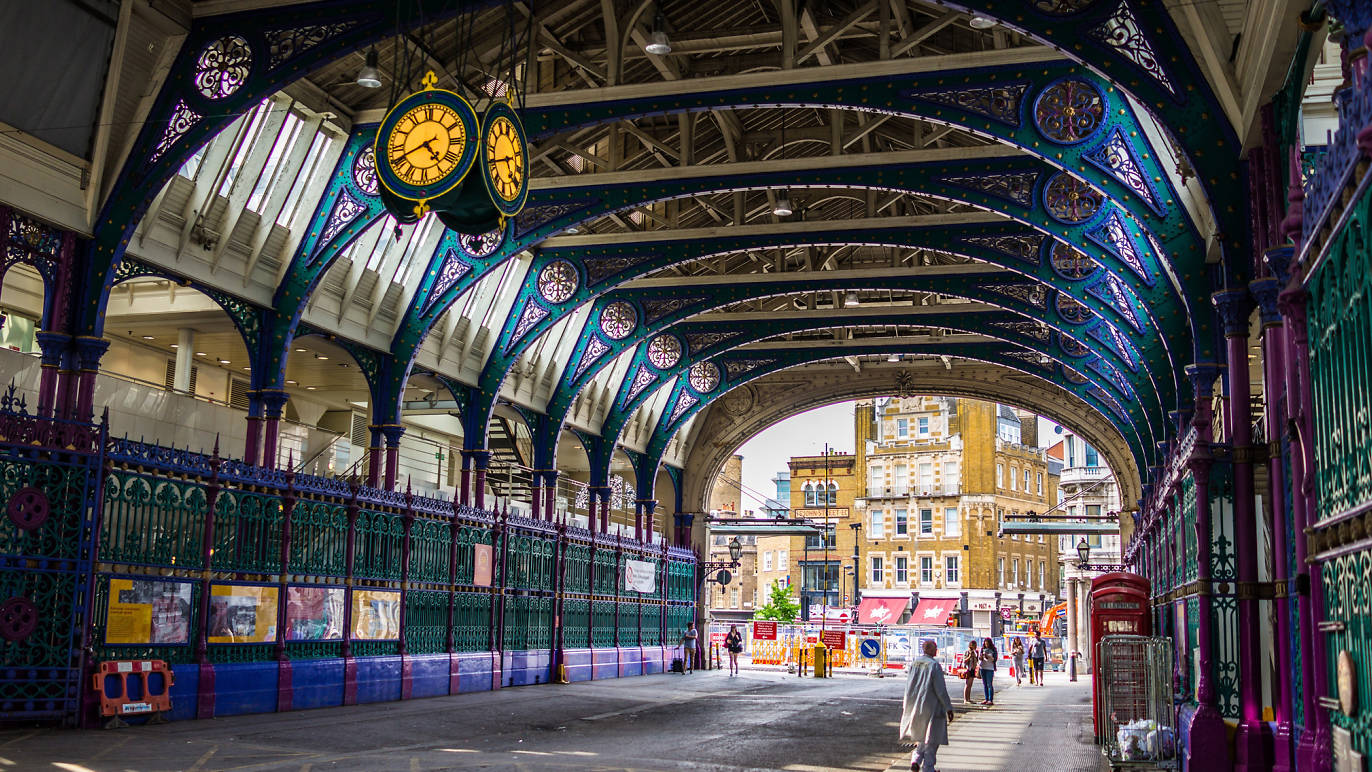 Smithfield Market is a place steeped in history. There’s been a livestock market on the site since the 10thcentury, though it was then called “smooth field”, owing to the lack of infrastructure. The covered market was originally designed by Tower Bridge architect, Sir Horace Jones in the 19th century. It was a gleaming embodiment of modernity, stylistically and functionally. It even boasted the first refrigerated storage units in the country and newly engineered ‘Phoenix columns’ of rivetted iron. These innovations endure today, as does the bustling livestock trade that’s played out here over so many centuries. 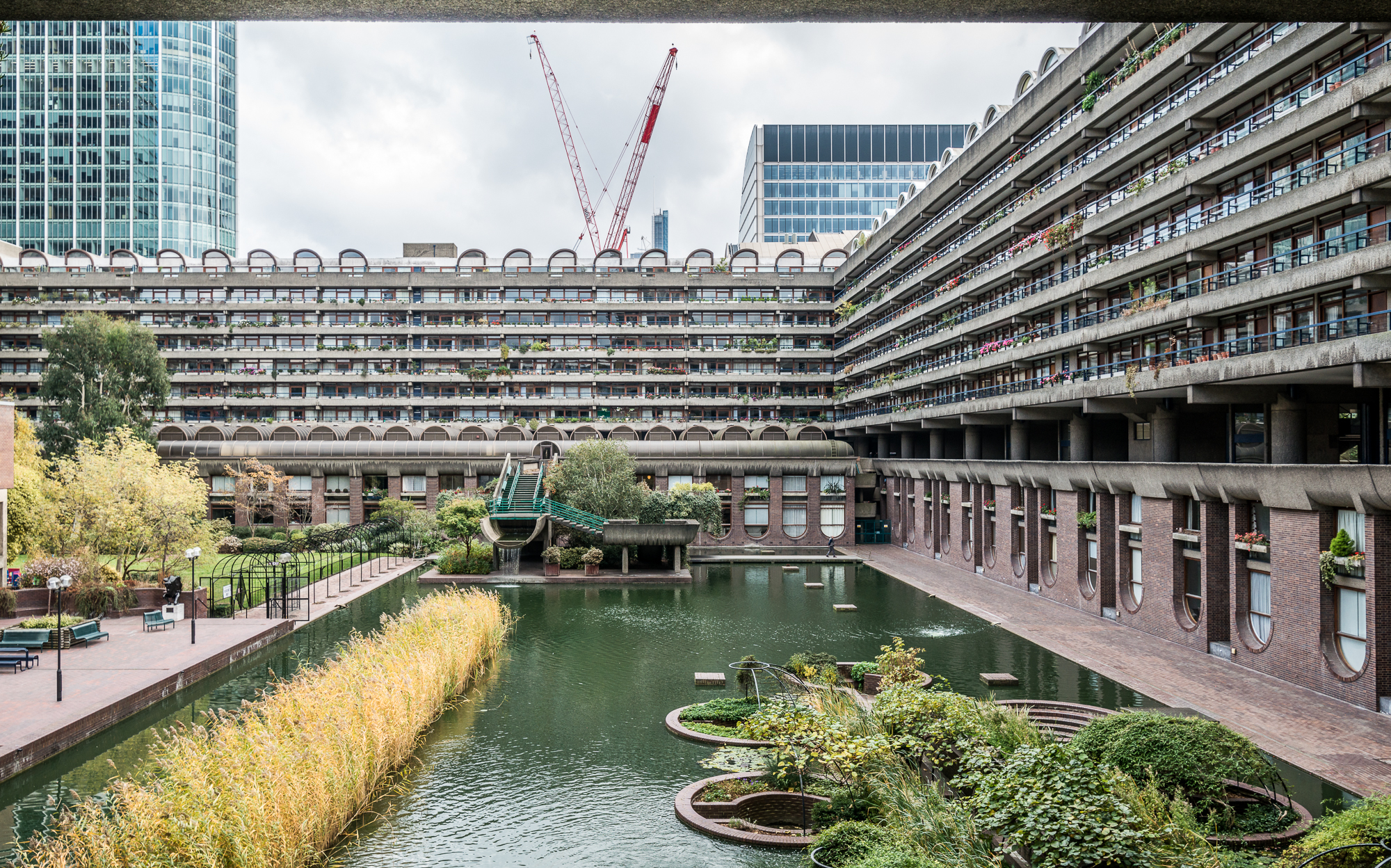 The Barbican Centre is a world-class performing arts venue, renowned for its Brutalist architectural style and the calibre of its spectacles. Less known is the estate that the centre sits within. Barbican Estate is a continuation of this architectural embodiment of post-war utopianism, stretching Brutalism to its bounds with an awe-inspiring treatment of water and a thoroughly original formal approach. Here you’ll find semi-sub-marine gardens, cleverly modular living units, and great sweeping horizontal extrusions, sandwiched by an arch motif. The lower units are fitted with inverted arched windows, which, when paired with the reflecting pool, can be truly boggling. The estate, designed in the mid-20th century by British trio, Chamberlin, Powell and Bon, is a veritable urban playground, especially for design enthusiasts. 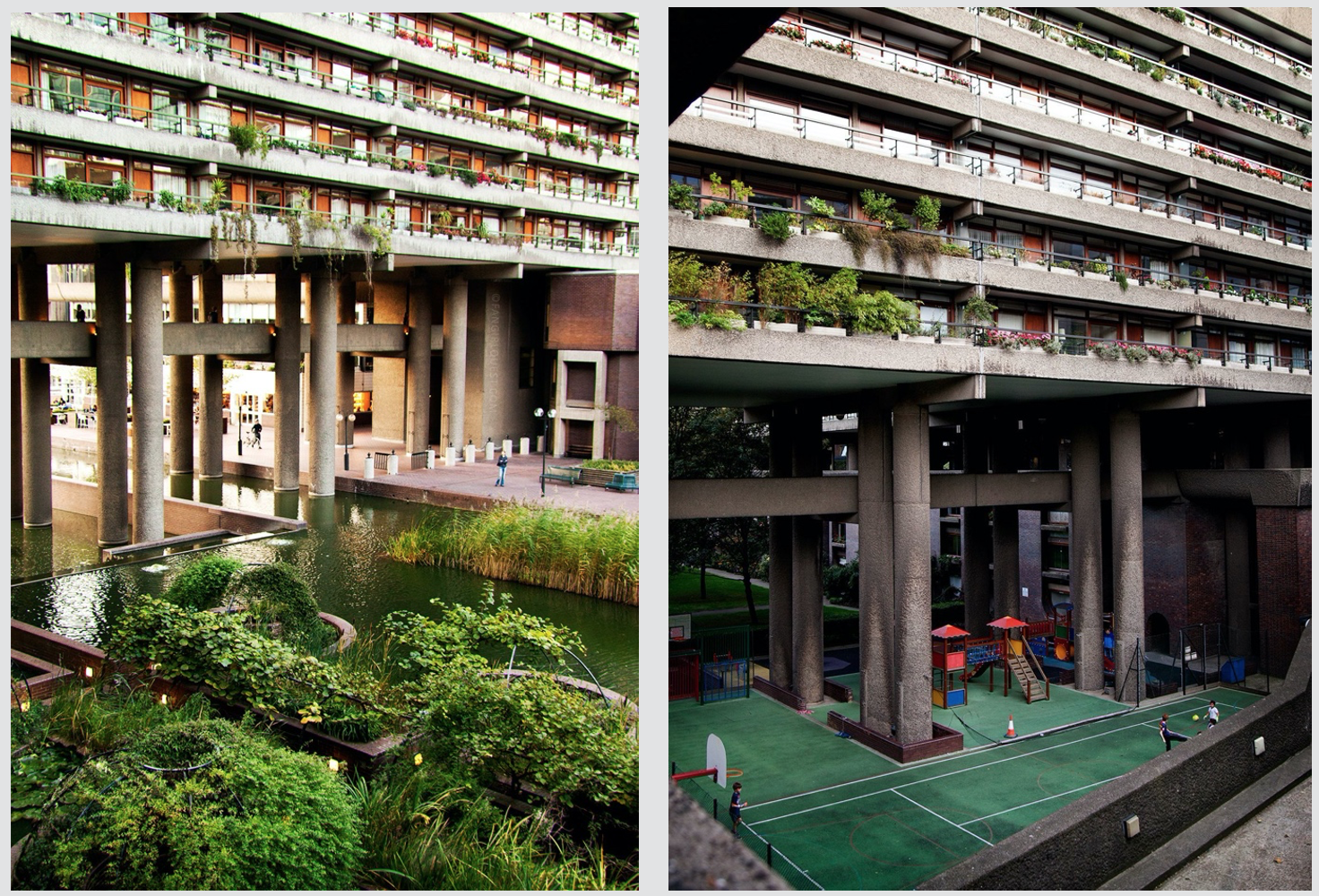 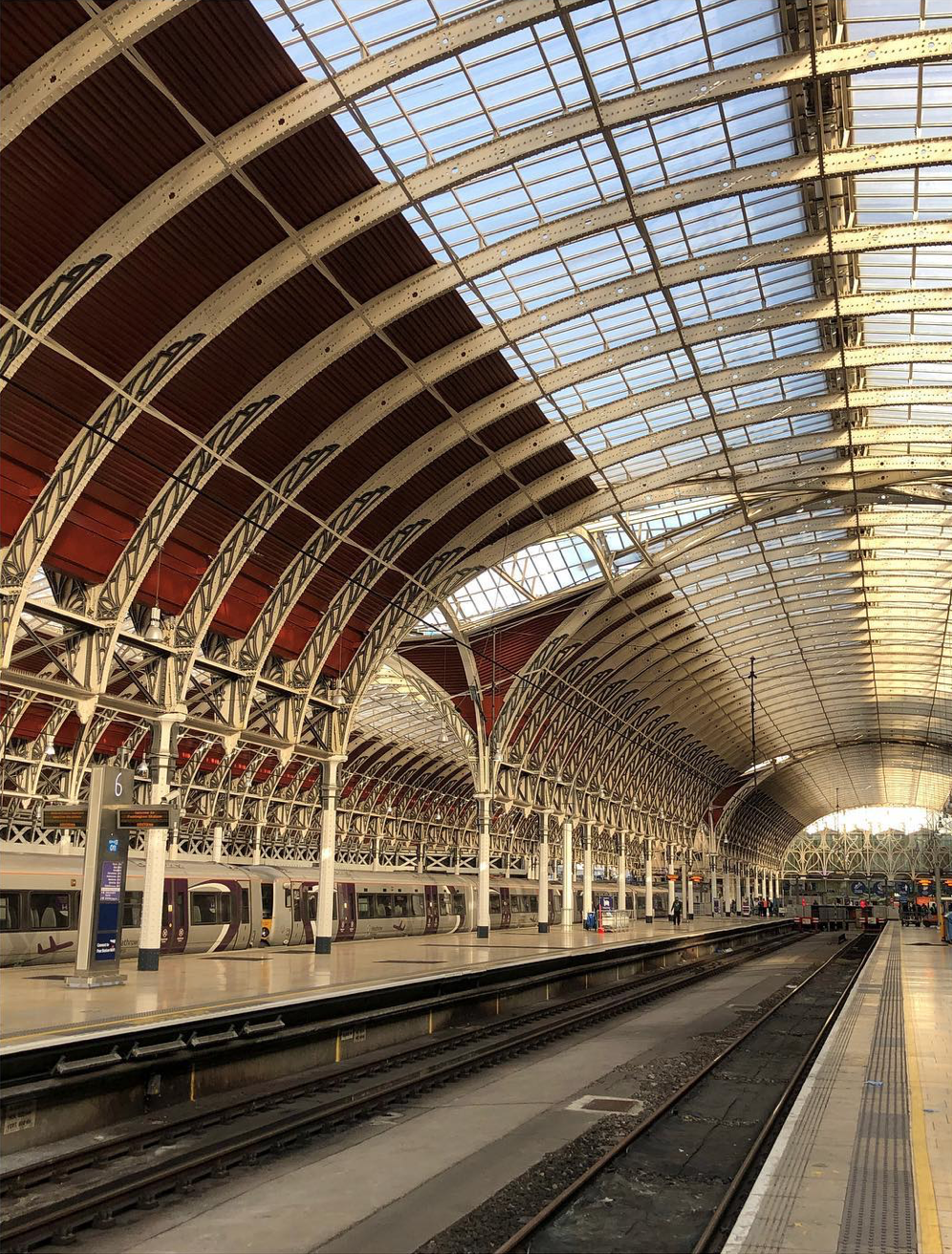 Paddington Station is one building that Tom’s developed a particular fondness for. He remarks:

“One of the pleasures of living in London and having a workshop in Swindon is that I frequently find myself in Paddington station – one of Isambard Kingdom Brunel’s finest achievements. A cathedral-like metal and glass structure that never fails to inspire – not only with its extraordinary beauty but also because it still WORKS – two hundred years on. It is hardly visible from the outside making it even more breathtaking when you walk into it. A great start to any journey…”

Every piece of furniture that Tom designs has a unique link to this place because our workshop, as it happens, was designed by the same great industrialist. Once referred to as the Great Western Coachworks, our workshop served as a place to house and repair the trains rolling in and out of Paddington Station. It’s a real privilege to hold a small piece of British industrial history, and it serves as a fortifying force in our work. 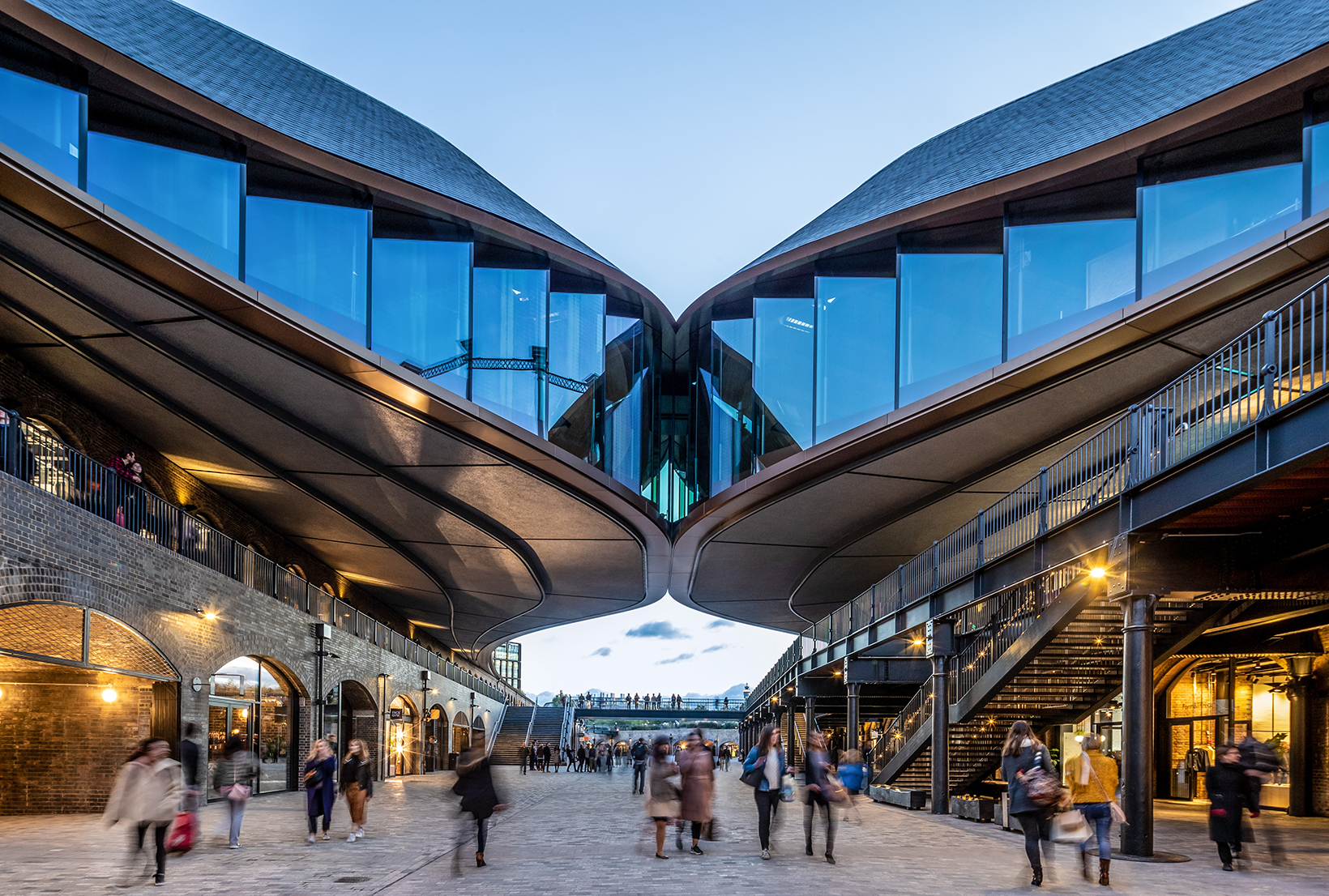 Coal Drops Yard traces its history back to the Victorian era when coal was the primary source of energy. This is where it was stored upon arrival from the north of England via nearby Kings Cross Station. The yard has enjoyed various incarnations since the 1800’s. It was home to counter-culture artists, often used as a film set, and even played host to some of London’s most raucous raves. In recent years designer, Thomas Heatherwick has done away with the rave bit, but kept that spirit of raw creativity. Since its 2018 re-opening, the yard has been bursting with restaurants, bars, and shops, functioning as something of a design hub. One doesn’t even need to set foot in any of the stalls to thoroughly appreciate the contemporary redesign of this industrial domain. 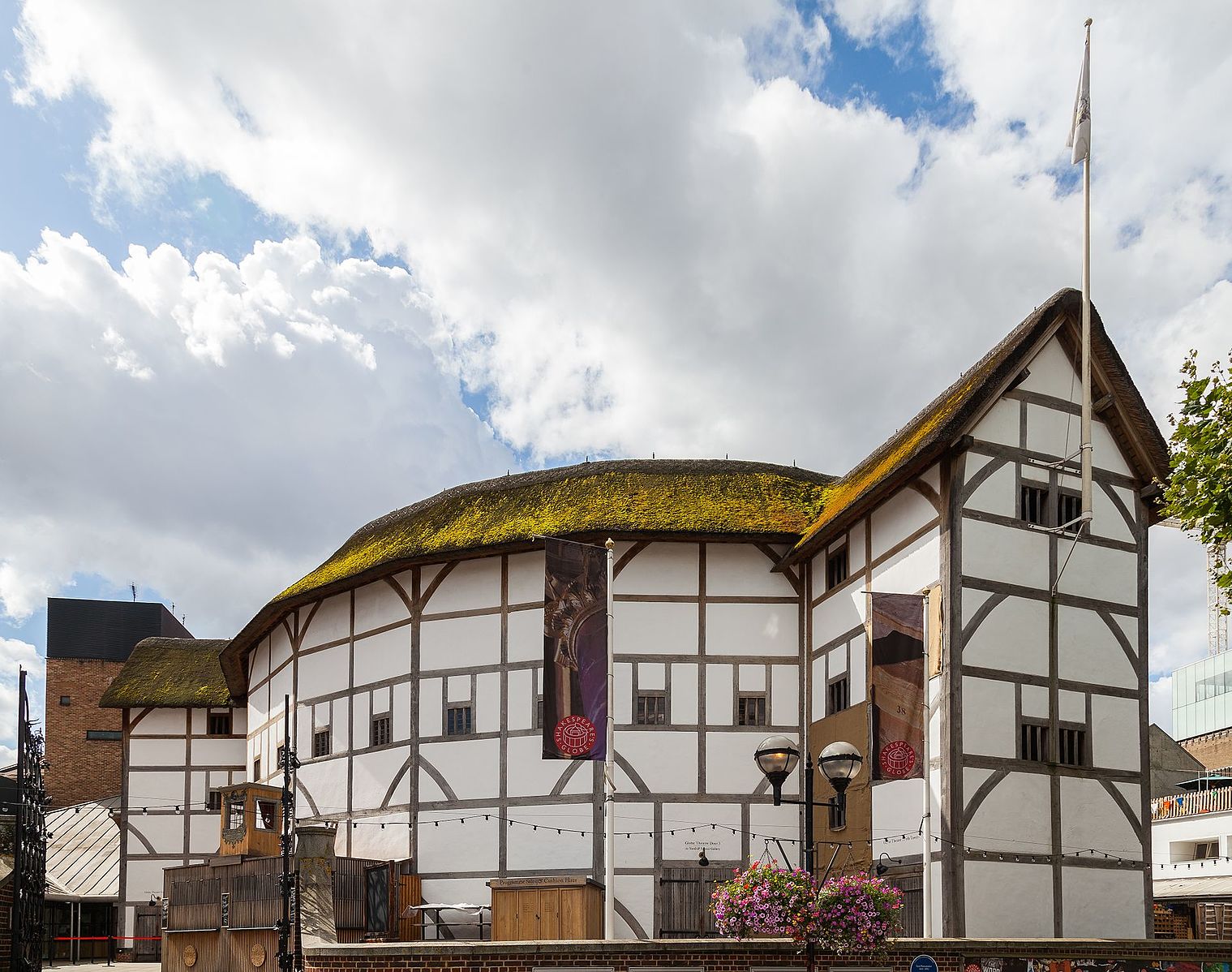 Shakespeare’s Globe is a delightful reconstruction of the original Elizabethan playhouse. This place on the south bank of the River Thames is where the works of Shakespeare were performed. The new structure, designed by Theo Crosby in 1997 echoes the two previous iterations that came before it. The very first was built in 1599 by the Lord Chamberlain’s Men, the company that Shakespeare part owned. The bard himself described it as a ‘wooden O’, which allowed plays to be enjoyed in the round. There’s no roof over the central yard, so these performances would have, and indeed, are, given al fresco and under natural light. No matter what the weather, the show goes on in all its glory, continuing the traditions of this birthplace of so many great works. 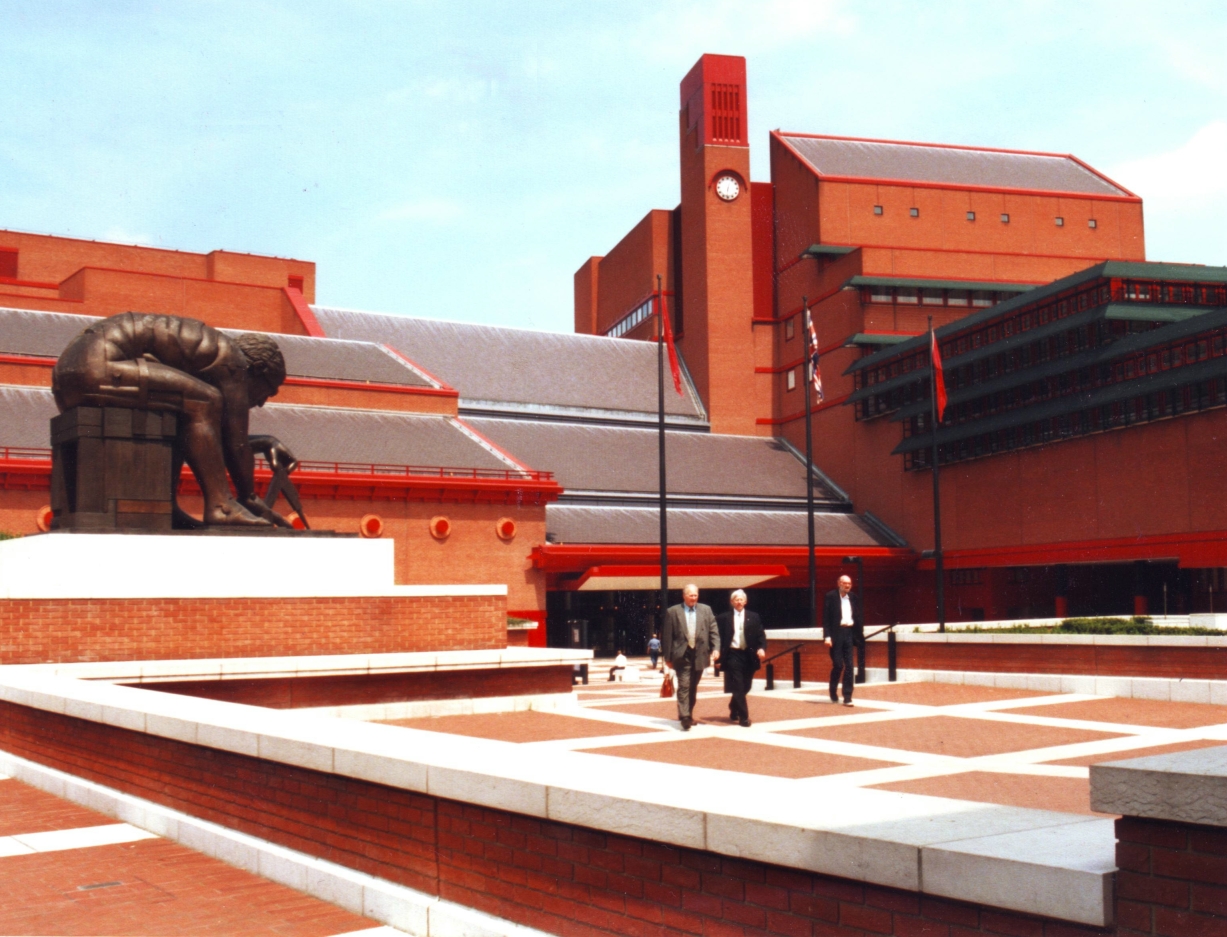 Exterior of the British Library in 1991

The British Library is home to a great many priceless pieces of history. Here you’ll find everything from a vellum edition of the Gutenberg Bible to the Beatles’ original song sheets. You’ll also be struck by the blazing red structures and stark geometry of the place. Sir Collin St John Wilson and MJ Long designed this gargantuan edifice in the 1970’s, though it wasn’t until 1998 that it was able to open. Wilson worked in a decidedly Modern style and was guided by Scandinavian principles of design, looking to the likes of Alvar Aalto for inspiration. He was energised by the idea of deviating from Classical concepts like symmetry, gravitating towards irregular shapes that broke away from the perceived ‘rules’ of design. Wilson was also informed by his previous career as a naval lieutenant. When viewed from afar and in its entirety, all the seemingly arbitrary lines of the library come together to evoke the form of a ship. It’s a truly unique, rambling design that, visit after visit, reveals new and invigorating qualities. 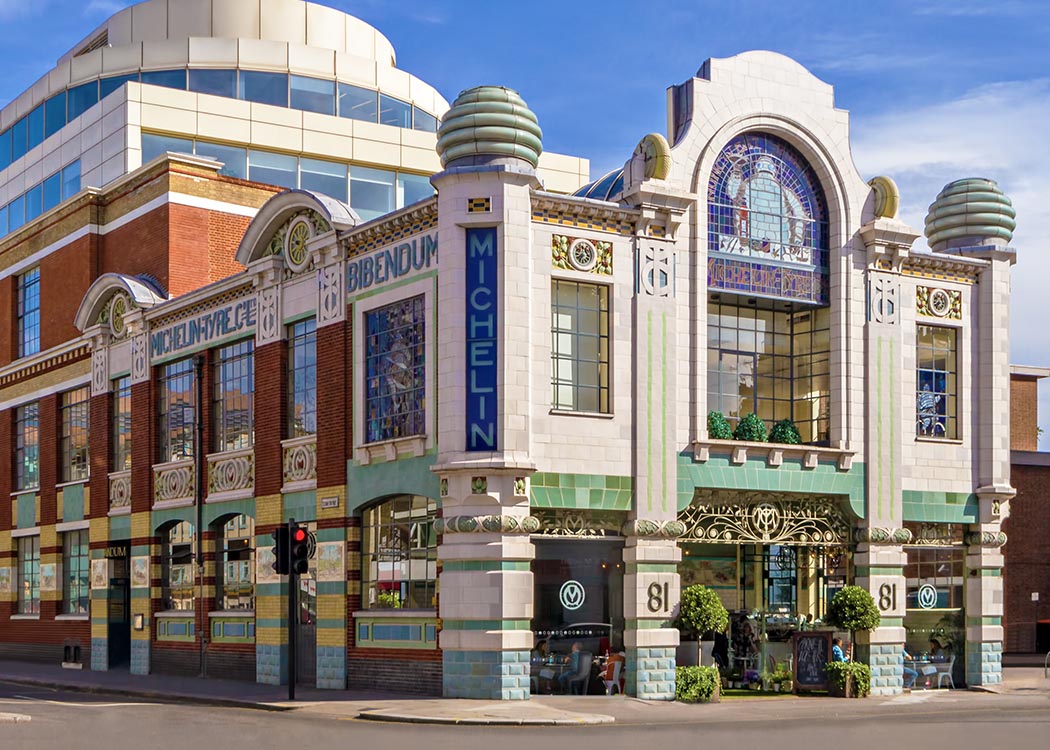 Michelin House is a spectacle of architecture that’s persistently difficult to shoehorn into any one style. Some dub it Art Nouveau, while others insist it’s a work of Geometrical Classicism. Whatever you call it, it’s earned its station as a cheerful bastion of design. It took form in 1911 at the hands of Michelin employee, François Espinasse, serving as a British headquarters for the French company. The building is dripping in decorative details, most of which feature Michelin’s mascot, Bibendum, who is often raising a glass above the Latin phrase, ‘Nunc est Bibendum’, or ‘now is the time to drink’. He’s even immortalised in stained glass and mosaic, which Terence Conran retained through his 1980’s redesign of the space. Today Michelin House is home to two spectacular restaurants (naturally), a flower shop, retail space, as well as the Conran head offices.

2 Willow Road is a proto-typical work of Modern residential architecture. It was designed by the Hungarian architect and furniture designer, Ernő Goldfinger in 1938, who’s perhaps best known for his Trellick Tower of flats. The project was besieged by a good deal of controversy, owing to its then novel and purportedly incongruous architectural style. Hampstead locals like James Bond author, Ian Fleming vehemently opposed Goldfinger’s plan, fossilising the feud by naming one of his most famous villains after the architect. Even so, the construction of three terraced homes went ahead, the Goldfinger family moving into the largest central unit and outfitting it in a decidedly Modern character. Rich wood panelling brings a sense of warmth to the function-forward space, which is sparsely decorated with streamlined furniture designs and world-class Modern art. The place has been kept just so by the National Trust for curious visitors, preserving the pioneering sensibility which built this simple, yet stunning Modern home. 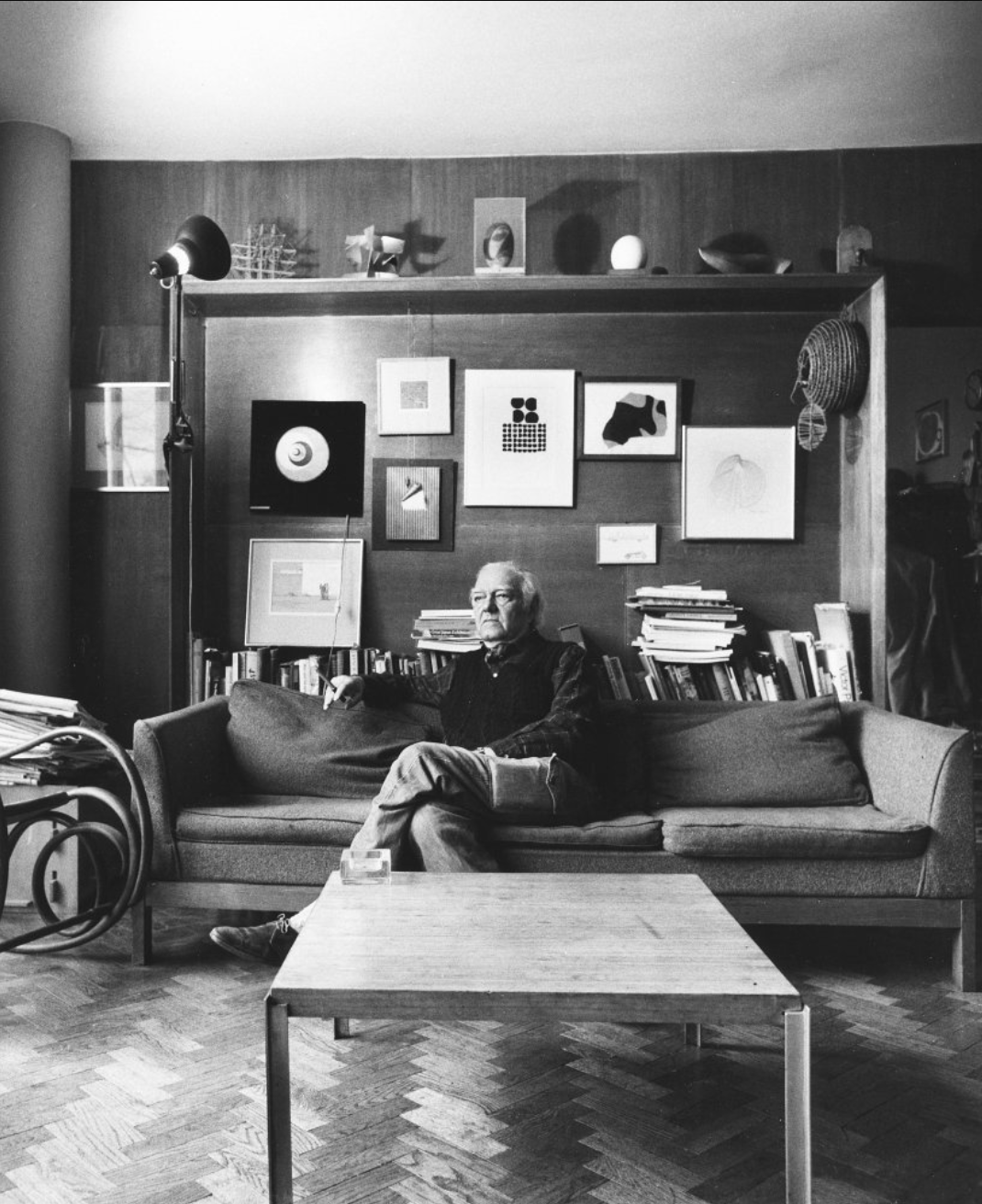