The Rolling Stones: Places and Spaces

Left: Charlie Watts on the drums in 2010; credit: Poiseon Bild & Text | Right: The Rolling Stones at Schiphol Airport in Amsterdam in 1964; photographed by Hugo van Gelderen

Last week left us reeling with the news of Rolling Stones drummer, Charlie Watts’s departure. The man was an icon of music and a cool head in the raucous climate of rock and roll. The world has lost an irreplaceable character and an inimitable talent – and it’s in his honour that we retrace some of the places that bore his light through the years. Read on for a voyage through the spaces that Charlie and the band have breathed life into along their way… 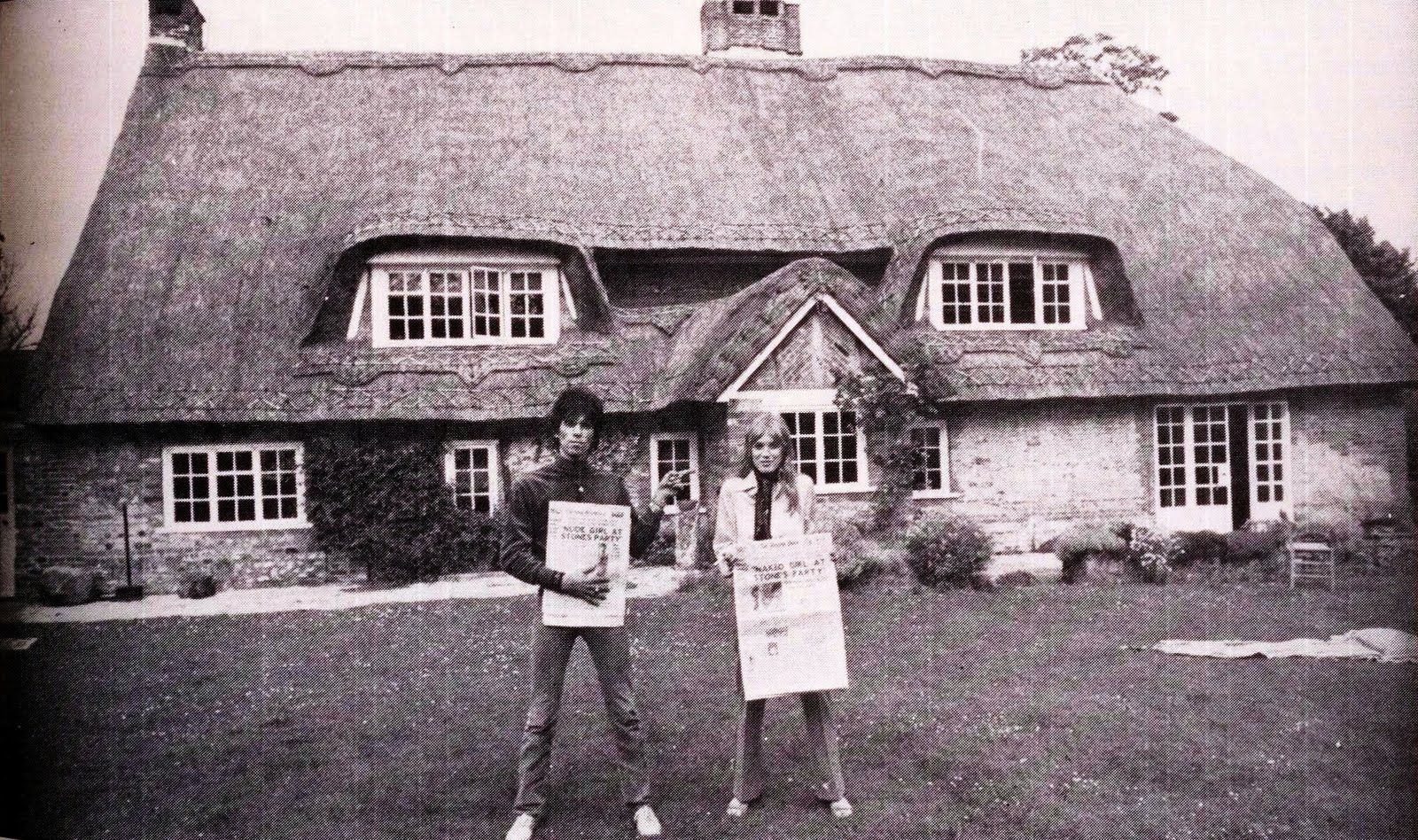 In typical Stones fashion, Keith Richards bought West Sussex’s Redlands House in 1966 by way of a happy accident. He made a wrong turn on his way to Fishbourne, resulting in a friendly chat with the property’s then owner, who mentioned the house was for sale. So, it was a done deal and Keith swiftly moved in with his charmingly named dog, Ratbag. 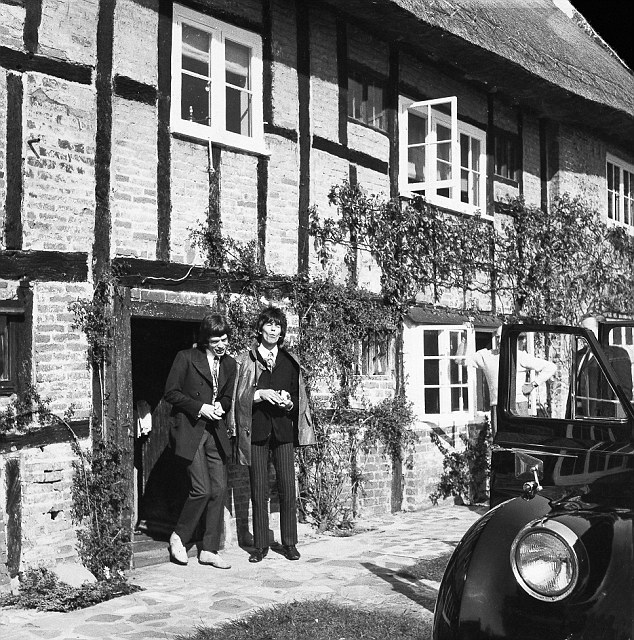 Keith Richards and Mick Jagger at Redlands House in 1967

The Grade-II listed thatched cottage had a great deal of history when the band came to it, with parts dating to the 13th century. The rumour is that it was once visited by Anne Boleyn. Though, these tales were eclipsed by one famous 1967 drug bust. Keith and Mick wound up in jail for a moment, before being released on bail with the support of a herculean campaign from their music industry colleagues. The typically conservative William Rees-Mogg even supported the cause with his op-ed, ‘Who Breaks a Butterfly on a Wheel?’. The incident did little to dim Redlands’ spirited atmosphere or the band’s love of the place. In fact, Keith owns the home to this day. 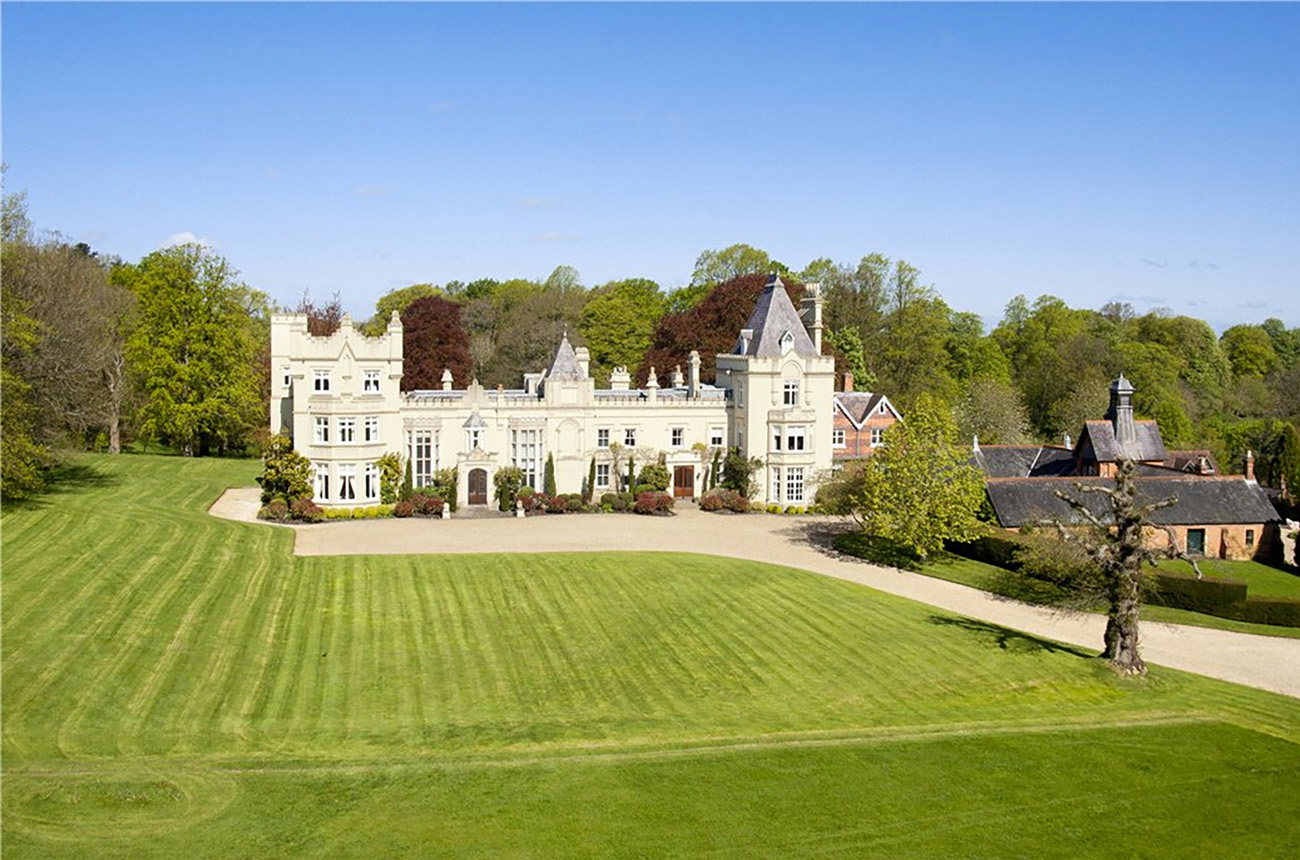 Stargroves’ chapter with The Stones was full of mischief from the start. Mick Jagger and Marianne Faithful were making their way through Hampshire, stopping frequently to dip into their cornucopia of substances. By the time they reached the manor house, Mick was well and truly in the thick of an acid trip. In his elevated state, he decided there was no reason he shouldn’t buy the place. So, in 1970, he moved in, bringing the whole gang along to work and play on the grounds.

The spectacular Stargroves manor house is a Grade II listed work of Victorian Gothic architecture, replete with Revivalist elements like turrets, castellations, and Tutor Revival windows. The current house dates to the mid-nineteenth century, though there are records of the original iteration going back to the sixteenth century. It made for the perfect backdrop to the band’s musical experimentations, attracting countless talented friends to join in the fun.

Inside the Rolling Stones Mobile

The mobile recording studio, affectionately dubbed the Rolling Stones Mobile, was conceived of at Stargroves as the group grew tired of the constraints of a typical recording studio, seeking to capture their own sound on their own terms. The band’s pianist and road manager, Ian Stewart brought the contraption to life, creating the world’s first ambulatory professional recording studio. 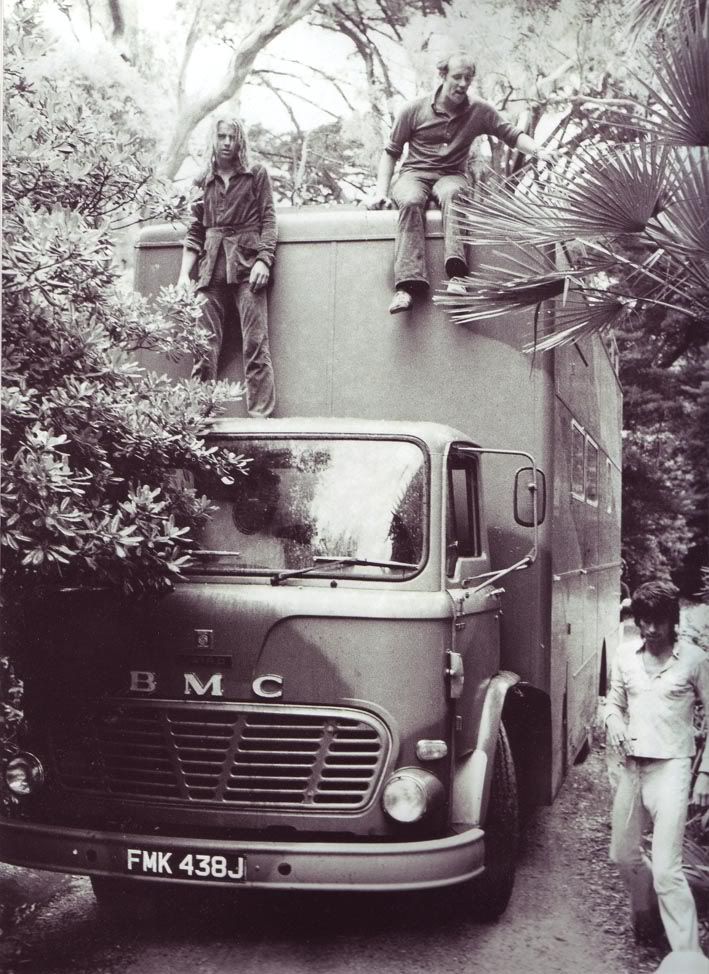 The Rolling Stones Mobile was originally intended exclusively for The Stones, but word inevitably spread. The roving studio gained popularity with other musical greats, like Led Zeppelin, The Who, Bob Marley, and Queen. This was the place that ‘Stairway to Heaven’ and ‘No Woman No Cry’ were recorded. Deep Purple was even moved to record ‘Smoke on the Water’ here following an incident in which the Rolling Stones Mobile was nearly engulfed in flames. A mishap with a flare gun at a Frank Zappa concert in Montreux, Switzerland brought the entire venue down in smoke. Friendly onlookers leaped into action, helping to push the roving studio out of harm’s reach. Thankfully, the Rolling Stones Mobile survived to record many more live shows and seminal albums over the years. 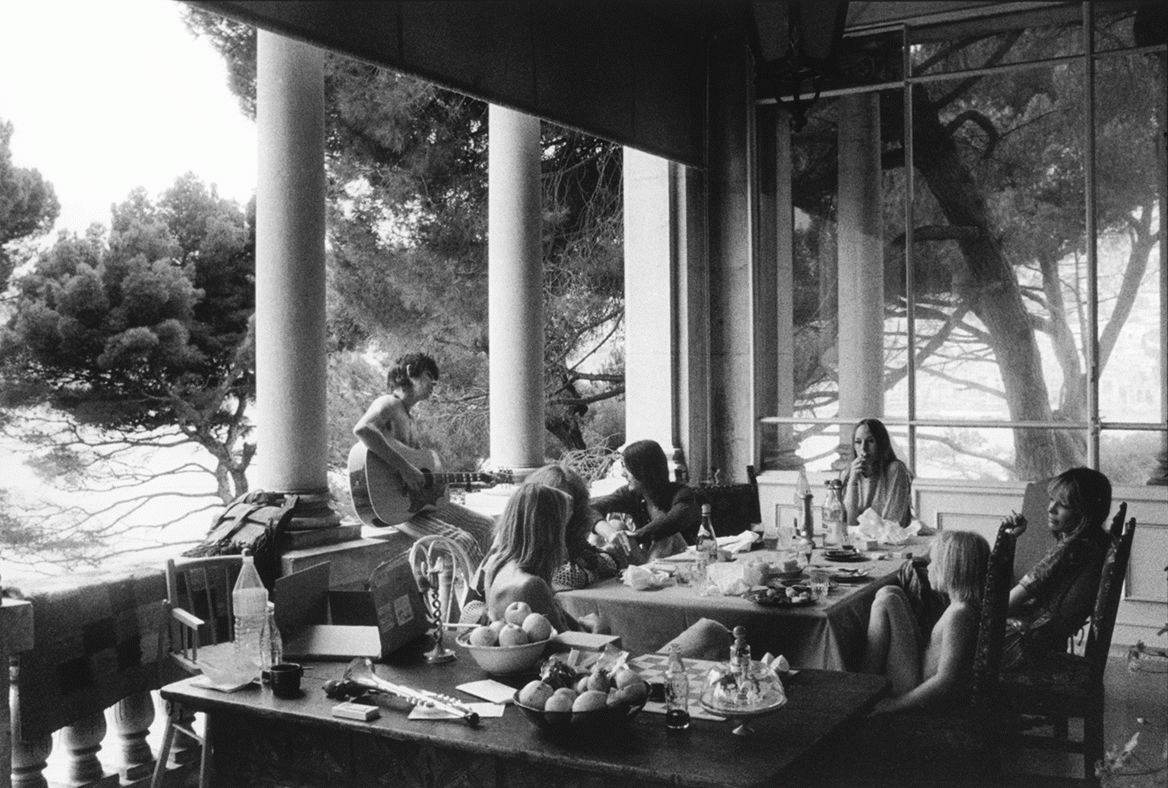 The “exiles” at Villa Nellcôte; photographed by Dominique Tarle

Villa Nellcôte is a Belle Époque beauty perched at the sea in Villefranche-sur-Mer on the Côte d’Azur. It was originally commissioned by banker, Eugene Thomas in 1854, taking shape as an opulent, columned hideaway. Gilded swastikas decorate the heating vents, marking the villa’s dark wartime chapter as Gestapo headquarters. Though, more than a little levity was returned to the place in 1971 when The Stones descended upon it during their period of “exile”. The band was short on funds so, in a bid to save on taxes, they escaped to the villa with a rag-tag crew in-tow. It all looks pretty extravagant on the surface but, in truth, The Stones couldn’t afford not to relocate to Villa Nellcôte. As Charlie recounts, “I said I wasn’t going to go but then they showed me the figures”. 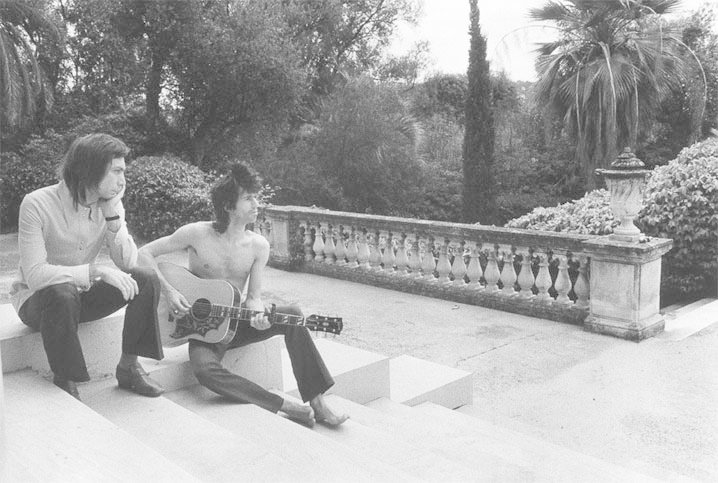 Financial friction quickly faded into the background as Villa Nellcôte became a carousel of characters, who dropped in for a three-hour lunch, stayed the night – or the week – and then moved on to who-knows-where. It couldn’t have made a better party house, though, wasn’t the best base for recording. It was a spectacular home as long as one remained above ground. In the basement where the band recorded, however, all hell broke loose. Shoddy electric work resulted in malfunctioning gear and frequent fires. Though, The Stones persisted, leaving us with their infamous album, “Exile on Mainstreet” to mark the period.

The Rolling Stones have a peripatetic past, dappled with no shortage of legendary triumphs and mishaps throughout. Amidst the highs and the lows, from the British countryside to the Côte d’Azur, and every mile aboard the Rolling Stones Mobile in between, they rode the wave of their fortune together. This is a group that knows how to live large and celebrate every shining point of positivity. So, one can only imagine the lengths to which they will go to in celebration of their friend, Charlie and the wonderfully big life that he led. Cin cin to the gentleman drummer.