"HAVE YOU EVER EXAMINED THE FEATHER OF A BIRD? NO MAN IN THE WORLD COULD MAKE SUCH A THING."– Alfred Russel Wallace, co-formulator of the theory of natural selection.

What happens when you marry earthbound, solid metal to something as definitively light and ethereal as the feather? Last year, Tom took part in a unique collaboration to find out. People have always been fascinated by feathers. This can partly be explained by their sheer beauty, but it is also a tribute to their most magical property: they enable their owners to fly.

Feather-work may be the most ancient decorative technique in the world. Its history stretches through the Renaissance, when Cortés sent crates of jewel-like Aztec examples home to the king of Spain, all the way back to the Stone Age. Feathers have long been symbols of power – think of the extravagant headdresses of native American chiefs, the ostrich plumes in the heraldic badge of the Princes of Wales, and the golden cloak of the Hawaiian king Kamehameha I, which was made with the plumage of 80,000 mano honeycreepers. Feathers have also frequently been used to adorn prestigious furniture, from the Golden Throne of Tutankhamun to the arms of numerous French chairs during the Empire period.

Evolution, of course, has been equipping birds with keratin-based appendages for far longer. And not only for flight. "Feathers are all about seduction", says Eric Charles-Donatien. "They are meant to attract". Eric is a master of plumasserie, the art of working with ornamental plumage. You can be forgiven for being unfamiliar with the term, but a century ago it was big business. In London alone, a third of a million egrets were sacrificed to provide raw material for the fashion industry in 1910. Exotic feathers were more expensive than any commodity apart from diamonds – forty-odd cases of them went down with Titanic, with a cumulative value of more than $2 million in today’s money. 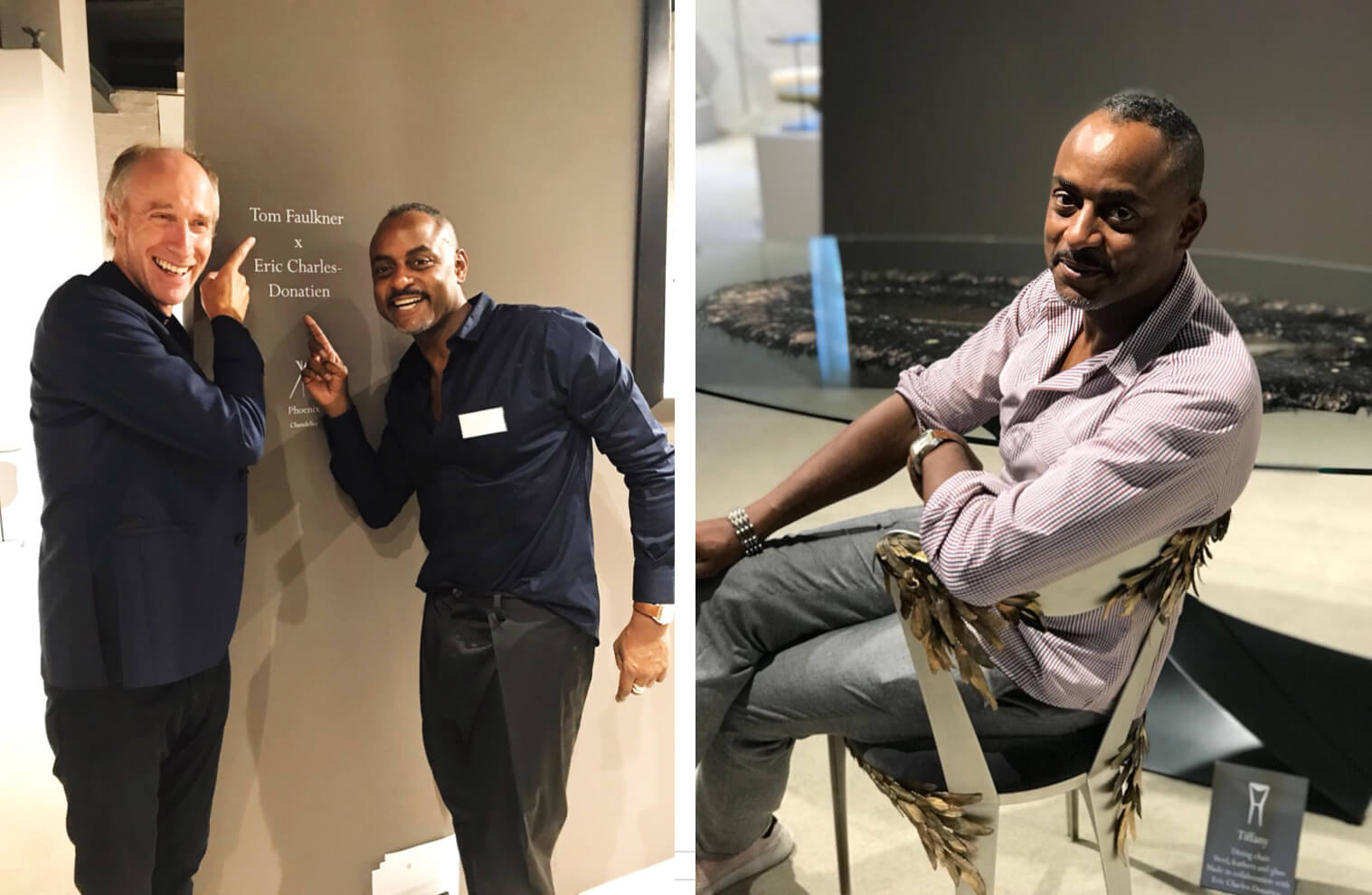 In 1919, there were 425 plumasserie houses in Paris, where Eric works and grew up. Today, thanks to changing fashions and the long overdue banning of the trade in non-game birds, there are only four. They are restricted to using antique feathers, or those from species like goose, duck, ostrich and turkey that are by-products of the food industry. But in skilled hands, these can be used to create wonderous effects.

Eric, who is considered by many to be the last of the great plumassiers, is proof that this ancient art still has much to offer. His professional pedigree is immaculate. After graduating from France’s top design school, École Duperré, he did an internship at Hermès, the nation’s oldest luxury goods manufacturer Then he was introduced to André Lémarié, whose grandfather had founded Maison Lemarié, one of the few surviving feather houses in 1880. Charles-Donatien had always been fascinated by flight – as a young boy he fantasised that he was put on Earth because he was an angel who had lost his wings – and he knew at once he had found his niche.

Eric’s talents have subsequently been employed by design luminaries such as Yves Saint Laurent, Alexander McQueen and Gianni Versace, and he has made dresses for Beyoncé, Kim Kardashian and Nicole Kidman. Feather-work is a collaborative process, and he relishes this side of the business. “I love working for others”, he says. “You have to enter their heads and think with them. It gives me more pleasure than working for myself.” This approach, of course, made him an ideal candidate to collaborate with Tom.

The two met at Decorex in 2017. Eric was immediately struck by a quality Tom’s furniture shared with his beloved feathers: the seamless combination of form and functionality. “I was mesmerised by the lines” he says, “the perfection of what are, to me, his very natural designs. They seem almost obvious because they are so perfect, like great music.” He was also drawn to the tactile qualities of Tom’s pieces and what he describes as their “emotional vocabulary”.

The admiration was mutual, so Tom and Eric sat down to discuss doing a project together. Eric drew up a shortlist of ten Faulkner pieces he might like to work with, before whittling it down to two: the iconic Capricorn table and the Tiffany Chair. The results of the collaboration were unveiled on Thursday 20th September 2018, during London Design Week.

On the face of it, metal furniture and feathers would almost seem to belong to different universes. But the combination of Eric’s breath-taking feather-work and Tom’s distinctive metalwork has brought out the best in both. In more ways than one, the plumasserie has given the furniture wings. The pieces explore the themes of permanence and fragility, and examine the dichotomy between man’s and nature’s creations. 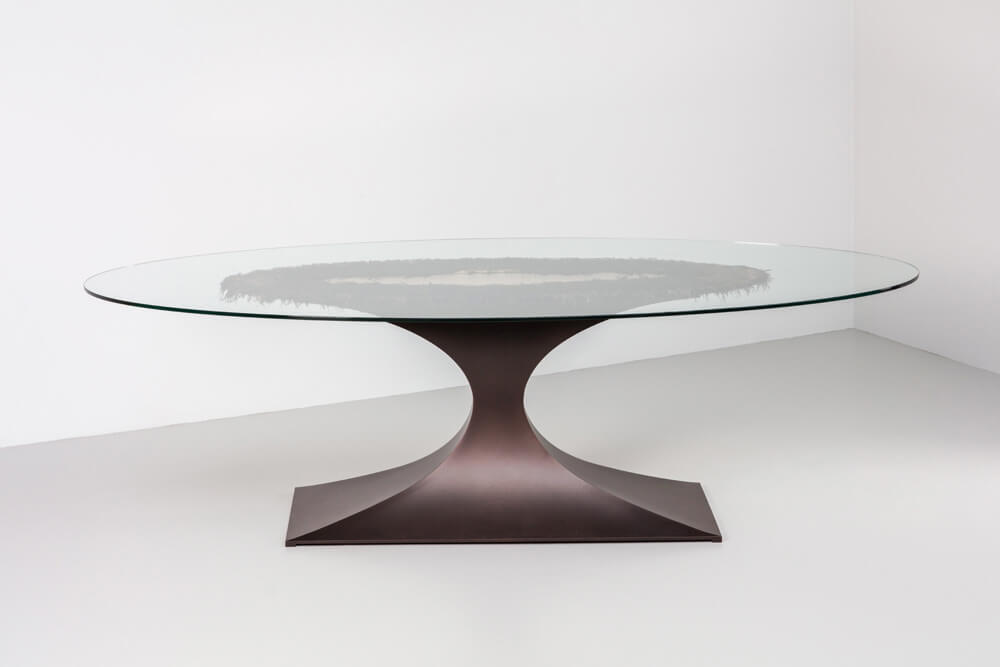 About The Capricorn Table Eric Says:"I love this specifically for the huge oval and the strong, refined foot in metal. I thought that the glass could carry the feather-work and make a very special statement. As you can see, the work is under the glass. You feel you can touch it yet you can use the table without disturbing it. It was obvious that an 'eye' design would fit the glass oval perfectly. I wanted to create a 'ray of light' effect, an aura. I decided ostrich feathers would be best as their straightness would give the impression of radiating lines, echoing the lines of Tom's work. I added lacquered feathers to emphasise this. They give a shining effect, almost like a nest, emphasising the protection that a bird’s nest offers. Overall, I think what I have added to the piece is like an organic version of what Tom’s design proposes." 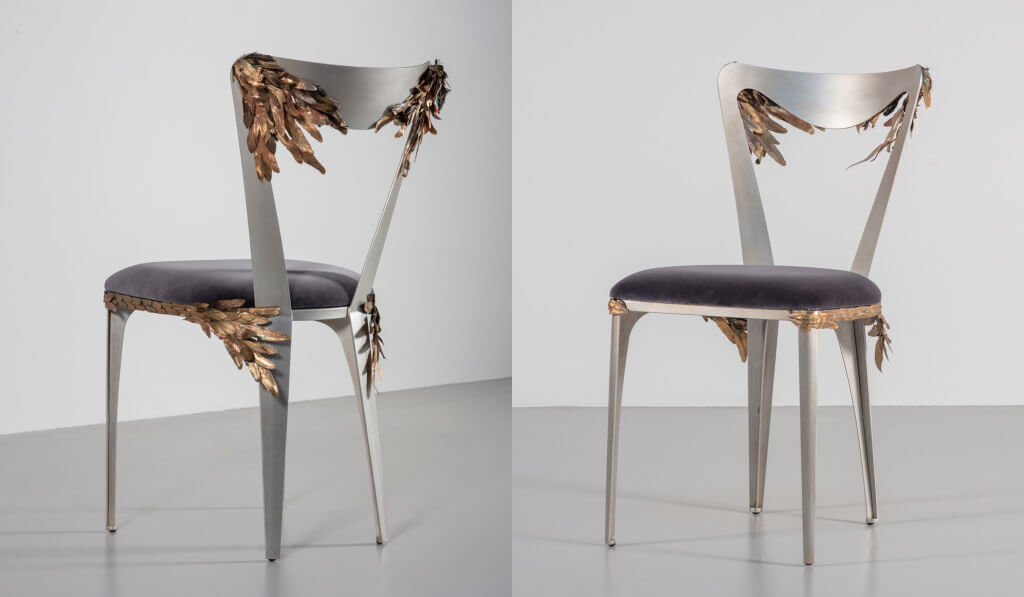 About The Tiffany Chair Eric Says:"This seems to me to be a very special chair, with this curve that makes it so comfortable to sit on, and the space underneath it that is an evocation of the air. It already struck me as very close to the birds and flight. I decided to increase this sensation by adding wings to the shoulders of the chair, with a mixture of feathers in metal and real ones. Then, where the cushion joins the back, I added small wings like a Hermes character would have on his feet [Hermes was the Messenger of the Greek Gods]. The idea was to emphasise the light, airy quality of the piece – so much of Tom’s furniture almost seems to be flying already. At the same time, as with my embellishments to the Capricorn table, I wanted to make the chair practical. You can carry it and sit on it properly and comfortably without touching the feather-work. The lines are so pure and natural, and I wanted to keep that spirit.

The Tiffany is a bit like the reverse of what we did with the Capricorn. I wanted to have more metal involved, since that is the material that primarily gives Tom's work its structure, and I use it a lot too. So I transformed the feathers into metal pieces, making them as alive as possible. They are goose feathers, painted an old gold colour to give a feeling of age. I also mixed in some real ones, so you get totally confused about which is which."