Creating a sense of place is a fine art. Architecture goes a long way but for a wholistic, perfectly harmonious environment, many designers have gone the extra mile by creating site-specific furniture which not only completes but is intrinsic to their spaces. Le Corbusier and Pierre Jeanneret’s Chandigarh is an excellent example of a city planned to the very last (now infamous) chair. Or take Ludwig Mies van der Rohe and Lilly Reich’s Villa Tugendhat in Brno as a complete embodiment of a new Modernist sensibility. Frank Lloyd Wright’s integrative design of the Willits House also stands as a testament to this all-encapsulating conception of built environments. The bespoke approach that Tom Faulkner takes to furniture design allows for boundless creativity in site-specific projects, such as the Vienna Bench. The product of this way of working is beautiful, uniquely complementary furniture which not only plays key functional roles but gives greater definition to the atmosphere and character of its spaces.

Cousins Pierre Jeanneret and Le Corbusier were called up to design the new capital of Chandigarh at a critical moment in India’s history. The year was 1950 and the country had recently re-gained independence. Chandigarh was to be the shining emblem of a forward-facing, self-determined India. Le Corbusier spearheaded the architectural side of the endeavour, while Jeanneret turned his attention primarily to its furniture design. Jeanneret adapted his Modernist style to suit his new environs, establishing a craft-based approach to design and experimenting with economical materials for widespread use. Local craftsmen forged each piece from the region’s teak wood before they were distributed throughout Chandigarh’s governmental offices and public buildings. This confluence of new-world sensibility and old-world craftsmanship and respect for the vast natural beauty of India produced a timeless aesthetic which holds its alure today. 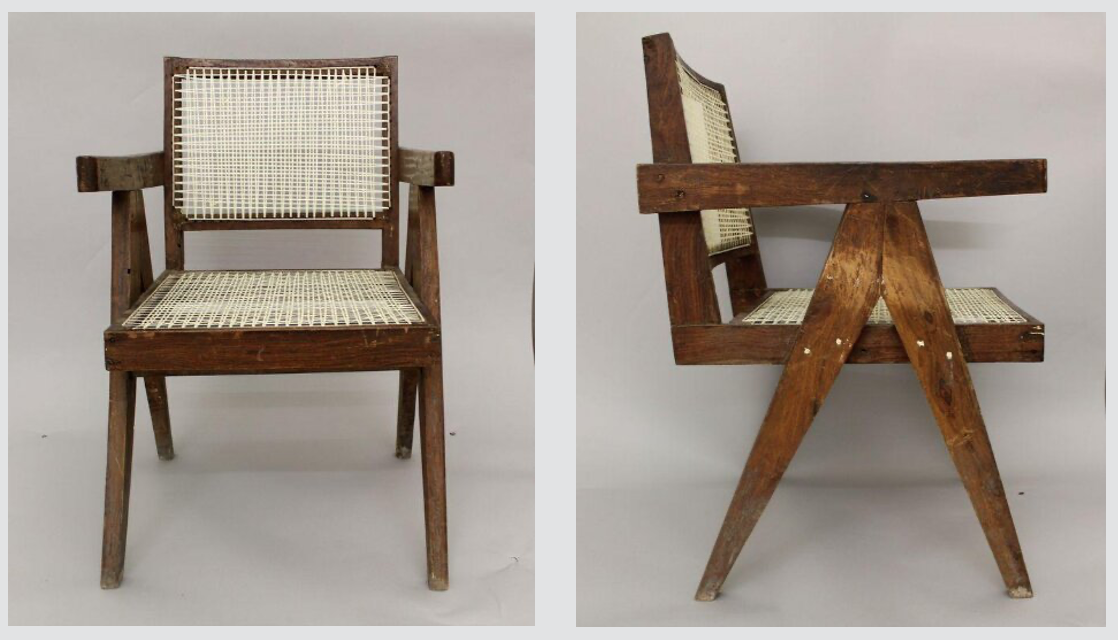 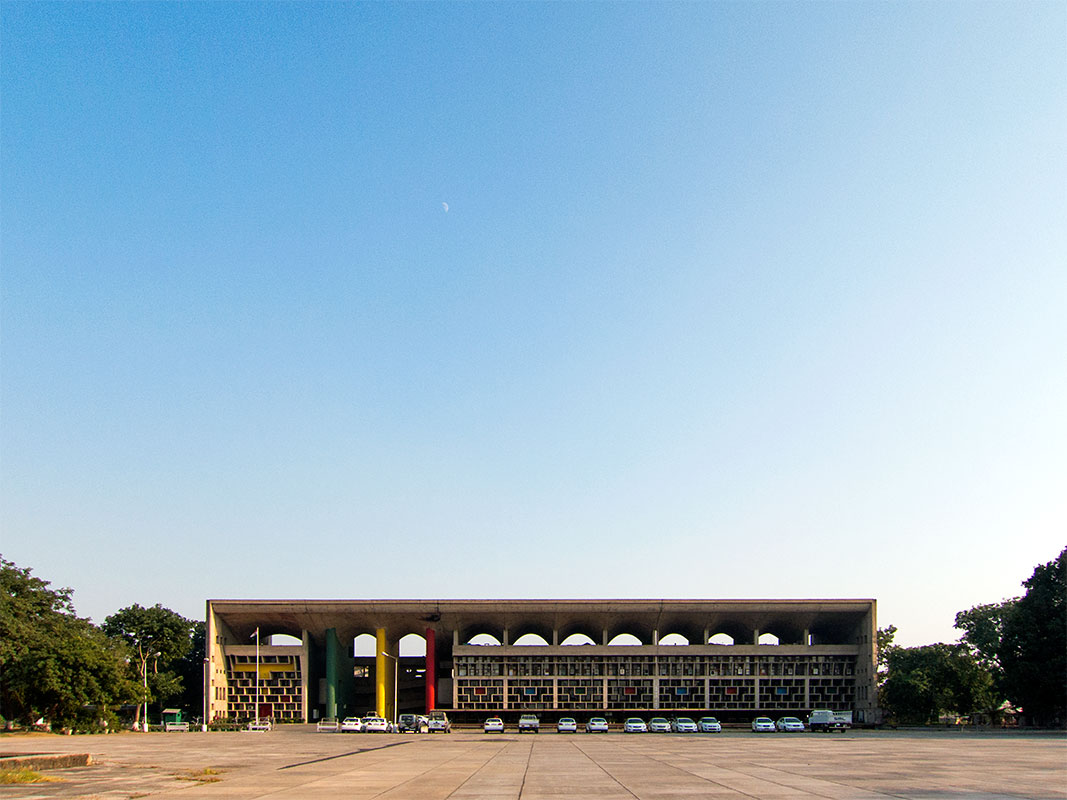 Jeanneret’s “Chandigarh Chairs”, as they’ve been dubbed, are products of this new approach to his work. They’ve since sprung from their native home to adorn an array of high-brow environs, from Hollywood living rooms to restaurant tasting tables. Even so, they carry with them a sense of the place for which they were built. The spirit of Chandigarh rings clearly through the pieces’ rustic materiality. The rich wood framework and cane surfaces speak to Jeanneret’s naturally rooted, craft-driven conception of the capital. The subdued symphony of soft, organic hues elicits a certain easy calmness and visual fluidity, despite the works’ distinctly geometric structures. These qualities temper the architecture of Chandigarh’s capital buildings, which are characterised by an effective combination of monumentality, bold Modernism, and cultural evolution. 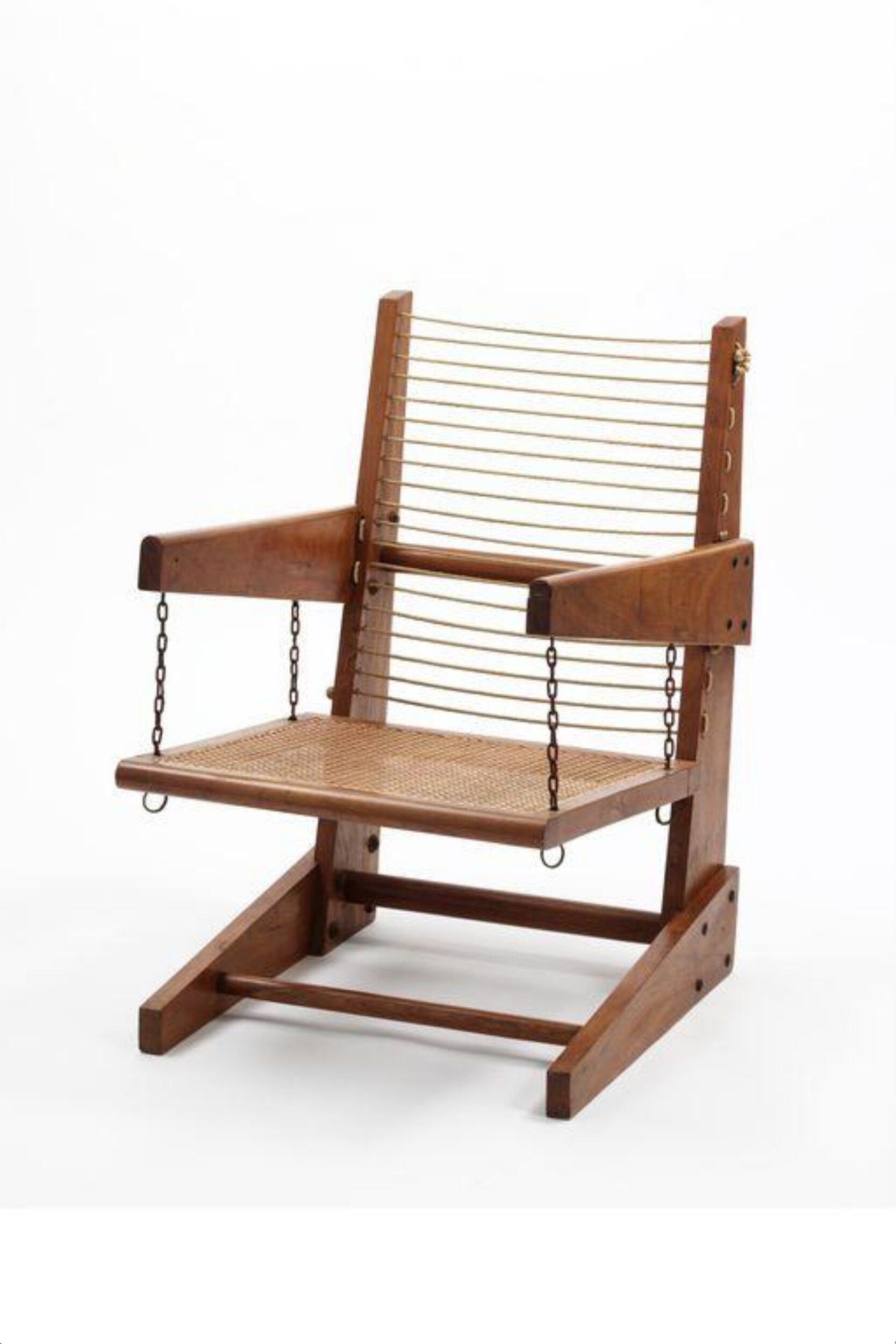 Jeanneret’s designs reached beyond Chandigarh’s public domain to occupy his own home in the city. He created an armchair which is a fusion of Modern principals and design elements with Indian craftsmanship and materials. The chair is emblematic of the Modernist enthusiasm for cantilevered design, but instead of using metal as a framework, Jeanneret employs local materials. The end result is achieved using wood, cane, and a highly original chain suspension system to support the seat – a Modernist marvel with its foundations firmly rooted in the Indian environment. 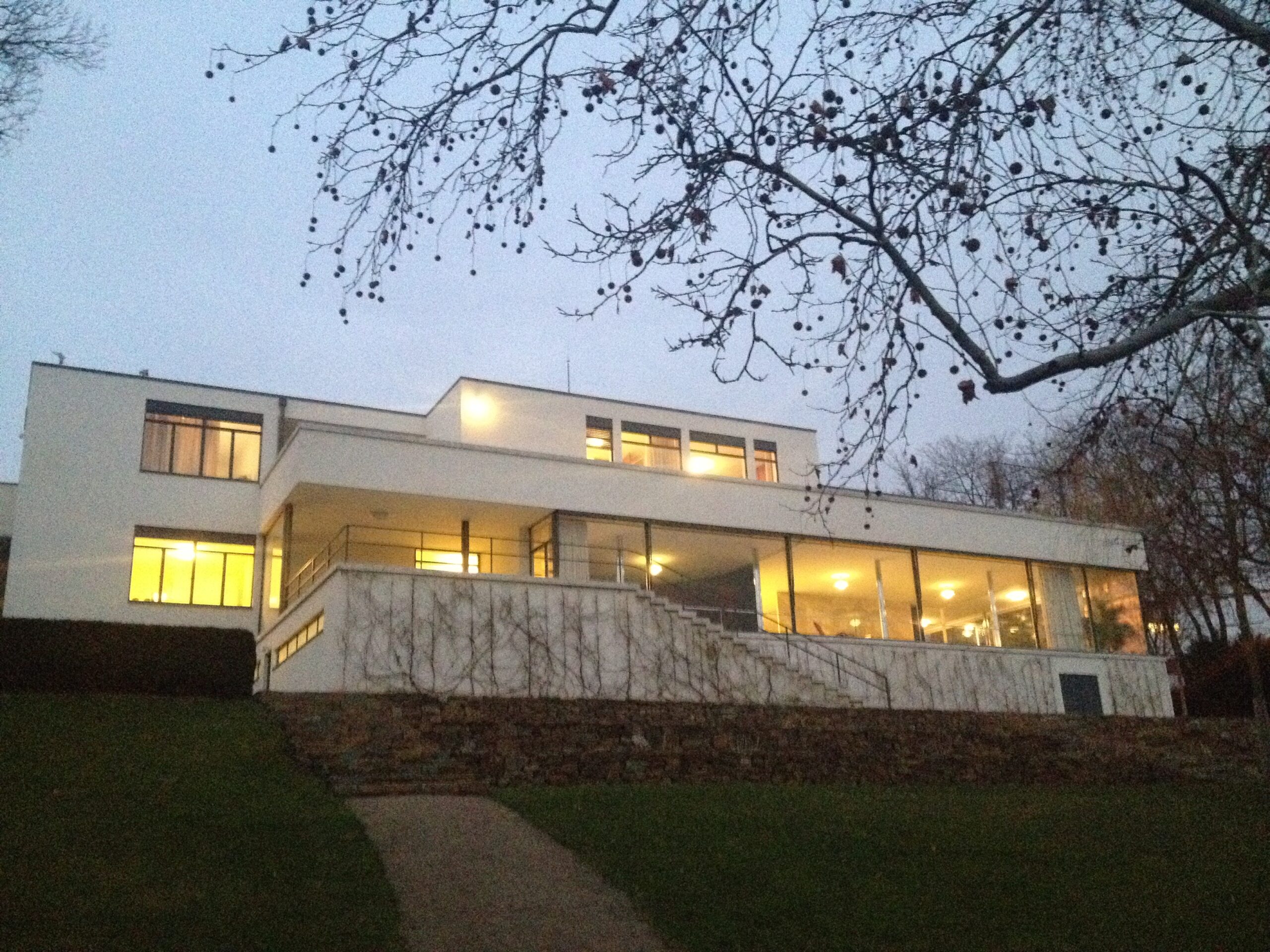 Mies van der Rohe and Lilly Reich embarked on their own integrative architectural project with the 1930 Villa Tugendhat in Brno, Czech Republic. This was a novel take on the family home composed chiefly of reinforced concrete. It went on to accumulate a fascinating history, with a 1939 confiscation by the Gestapo which saw it occupied as a war office, as well as a brief chapter serving as a stable for the Russian cavalry. Though, at its inception, the Tugendhat project was a crisp canvas which provided perfect conditions for the confluence of architectural and furniture design. 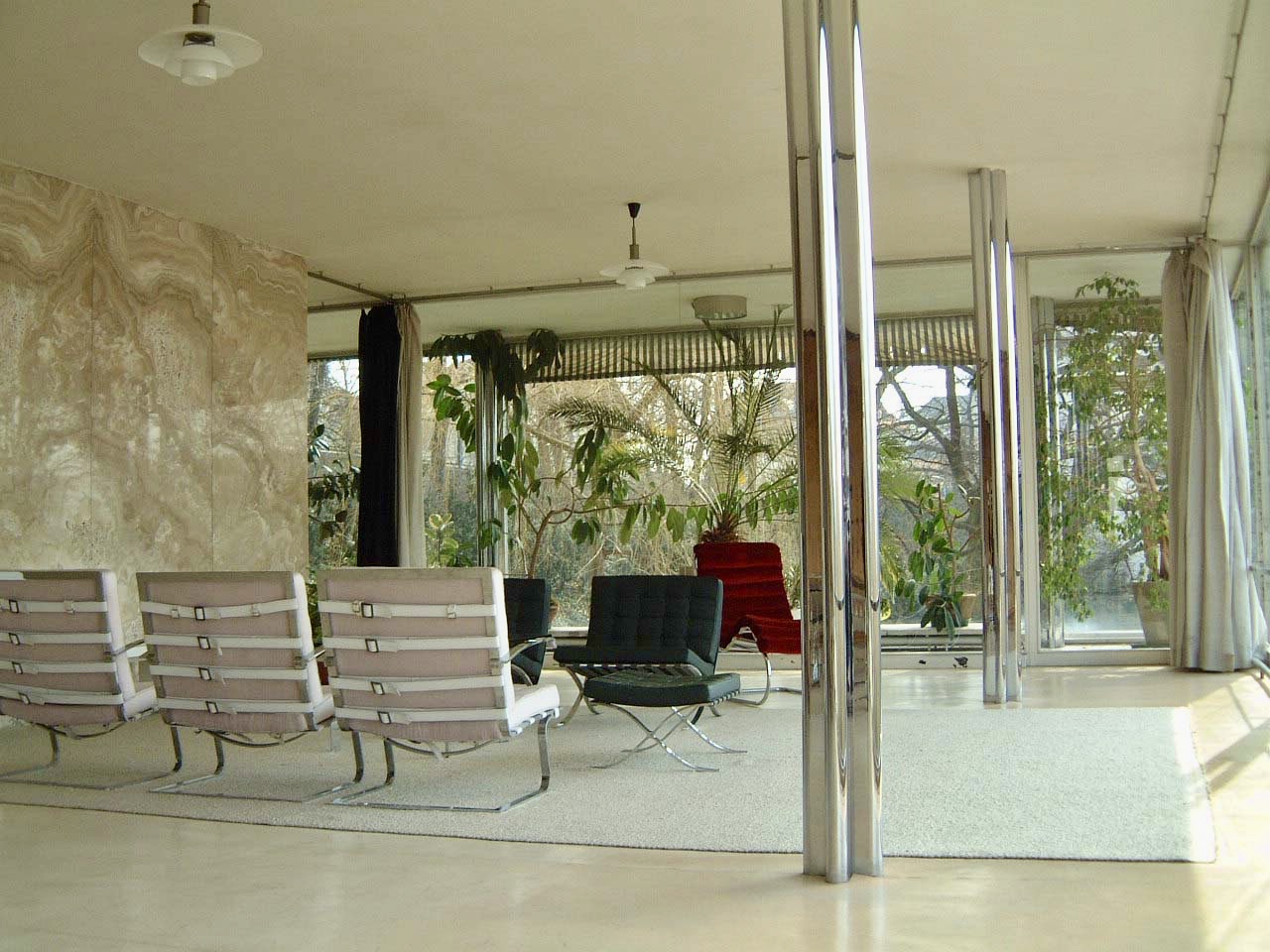 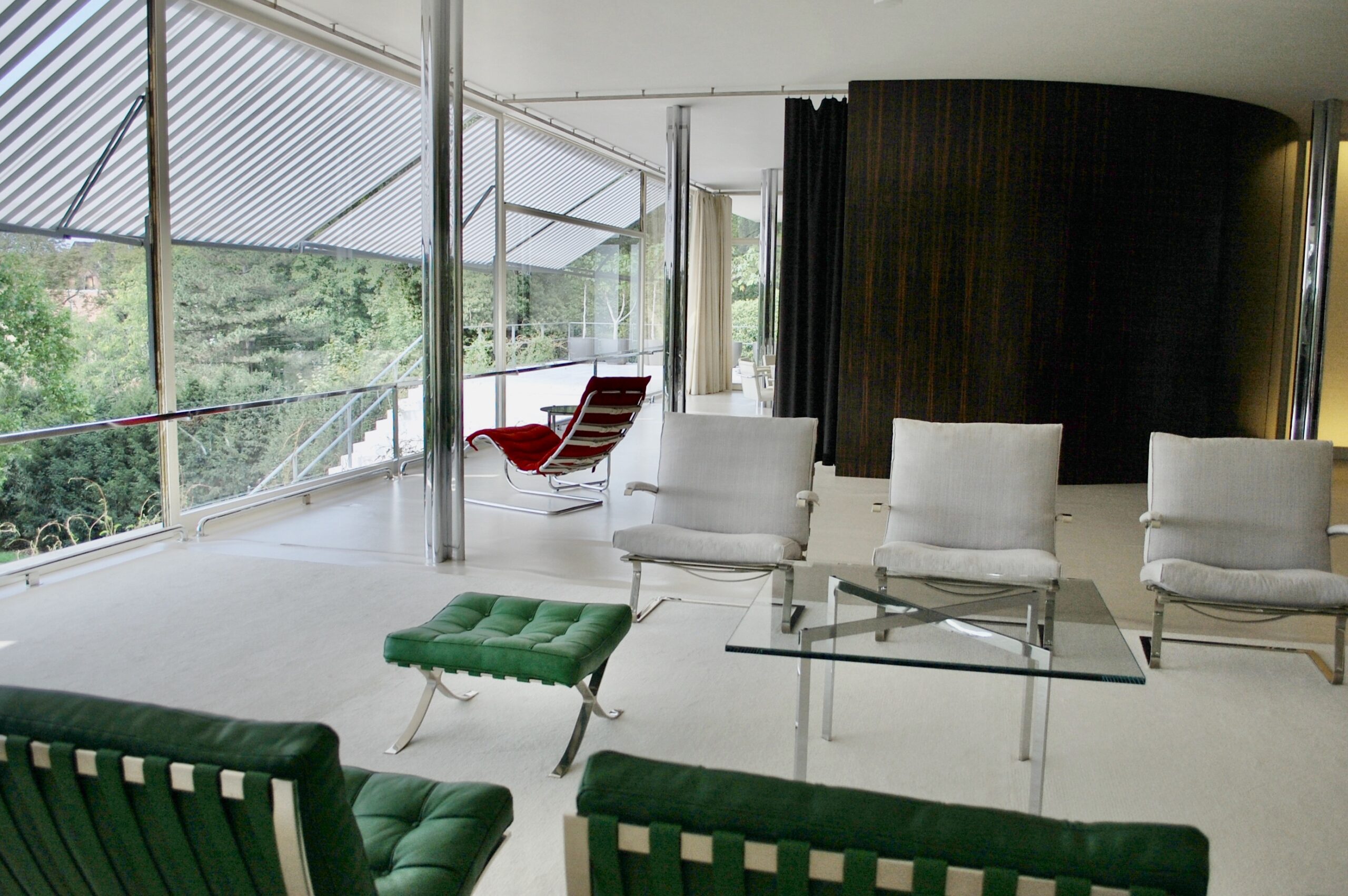 Villa Tugendhat is a work of Functionalism, with ornamentation stripped away in favour of efficiency, simplicity, and utility. Van der Rohe designed new engineering systems that allowed for a remarkably open floorplan with great expanses of usable space. He utilised these expanses by sparingly placing his site-specific furniture designs throughout. Two such pieces remain in production today: the Tugendhat Chair and the Brno Chair. 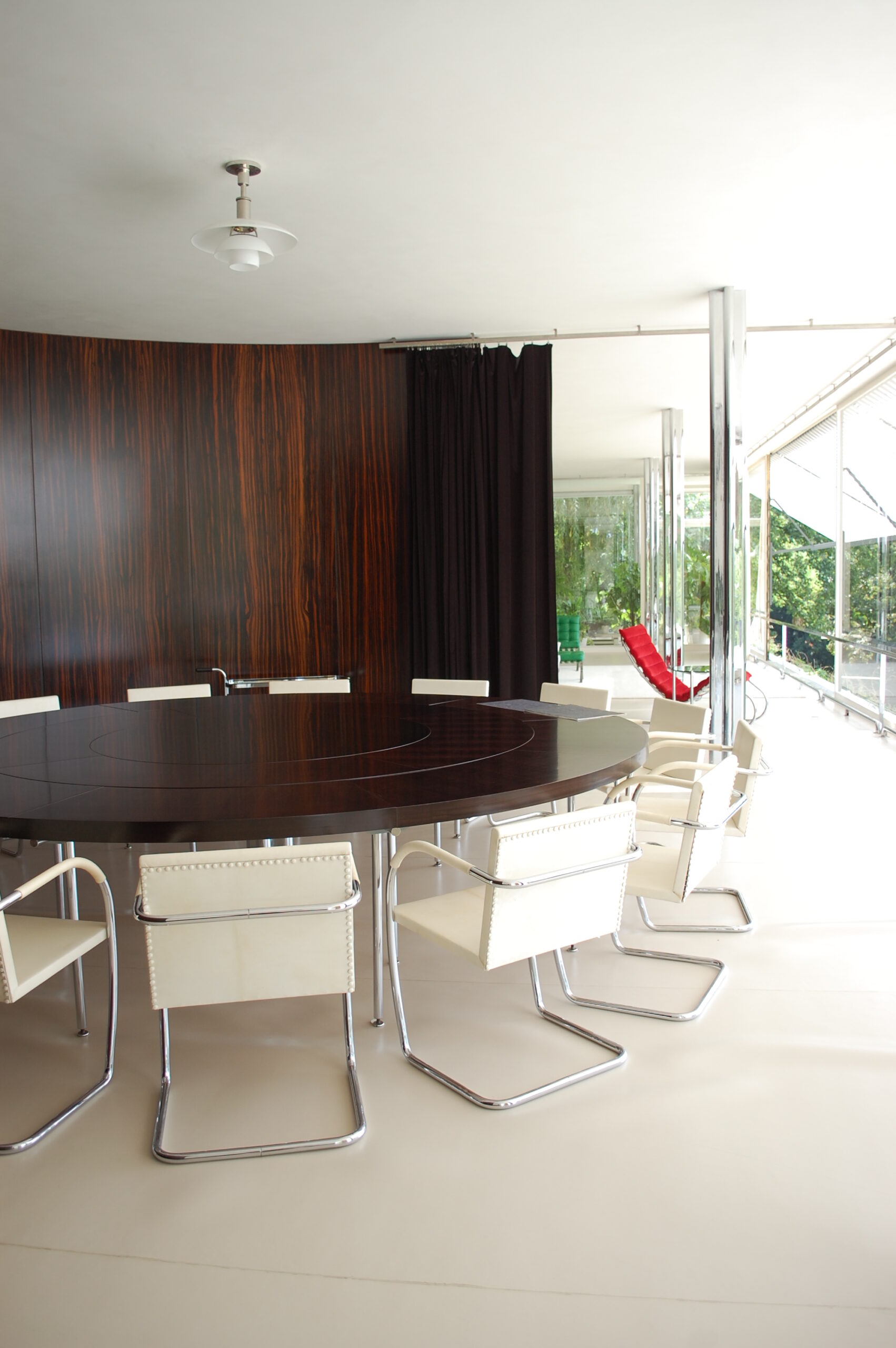 Villa Tugendhat holds a special place with Tom, who made the pilgrimage in 2013 to view one his personal favourites, the Brno chair. In this airy, open villa devoid of any art or decorative accoutrements, the Brno chair and its accompanying furniture took on a sculptural quality and a position of some esteem in the overall visual narrative of the home. The chairs benefited from interplay with the captivating materials used in the building’s interior architecture. A peppering of distinctive tropical woods adds complementary intrigue, and a wall of partially translucent onyx highlights the glinting tubular metal and crisply frames the chairs’ clean lines. The living room’s chrome-clad columns also played into the metallic framework of the chairs, tying the interior together as one harmonious inhabitable work of art. 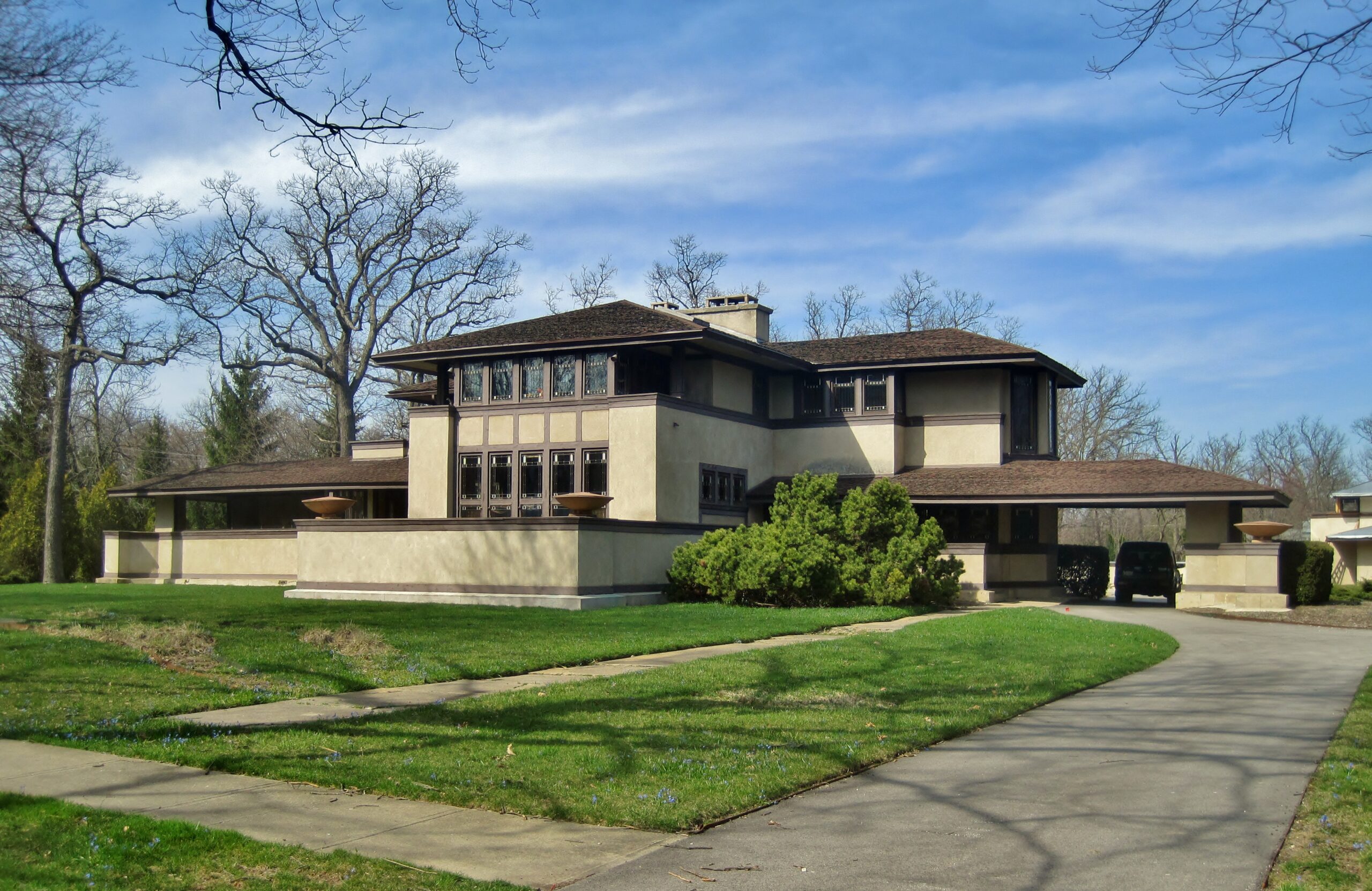 In 1902 Frank Lloyd Wright designed the home of Ward Winfield Willits in Highland Park, Illinois. His masterful incorporation of architecture and nature distinguished the home as one of the great Prairie-Style houses. Its furniture was intrinsic to Wright’s design of the space, extending beyond typical practical applications. He designed a distinctive high-backed dining chair specifically for the space, with an exaggerated sense of verticality which balances the squat quality of the house’s architecture. The stained white oak piece is, in many ways, a distillation of Wright’s furniture design ethos and style. It’s geometric and comprised of sheer, intersecting planes, conjuring his classic “architectonic” style.

Wright’s furniture designs provided a solid base for Modernist design advancements to come. Although, he differed from many of the later Modernists who designed with an eye to standardisation and mass production. These chairs were of the place and for the place – they were conceived so as to complete the design of the Willits House in particular, without any great aim for wider dissemination. The chairs played a key role as part of the interior architecture of the home, their hyperbolically tall backs defining discrete areas within the space and directing the flow of movement. 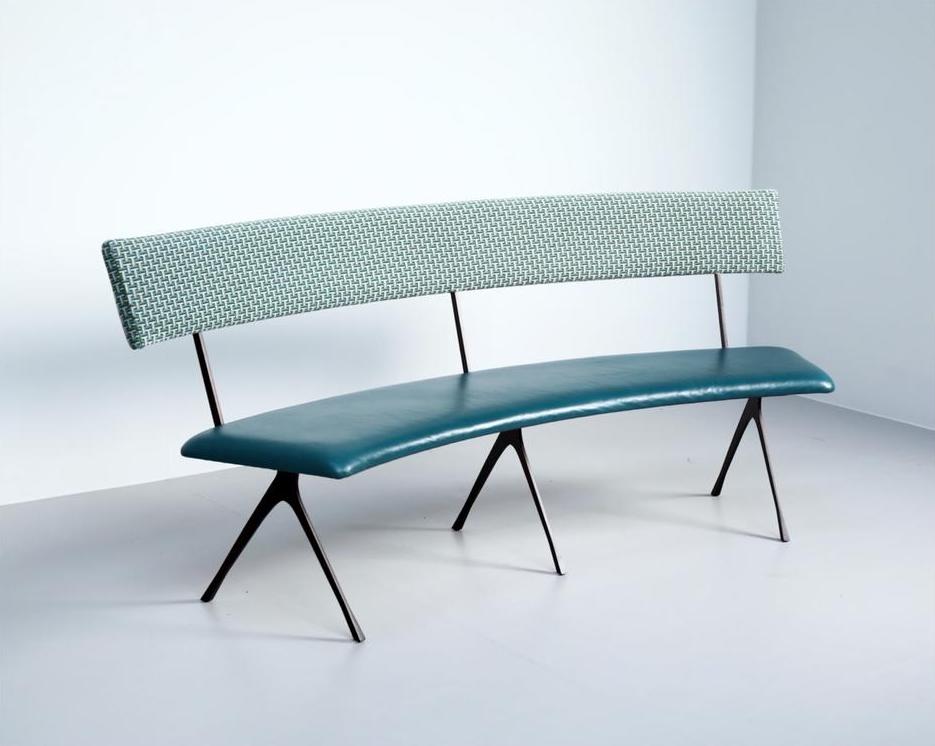 Tom Faulkner’s furniture design process is, by nature, largely bespoke; although, there are some projects which entail especially considerate customisation. When a client’s dining space called for an original take on seating, Tom reworked his Vienna Dining Chair into an elegant six-legged bench. The piece carries the quintessential Vienna aesthetic, yet takes on an entirely new elongated, curved format tailored to the ovular formation of the dining area, which centred around a Capricorn Dining Table flanked by a further four classic Vienna Dining Chairs. The effect was a space that felt coherent with the surrounding architecture and existing flow of the room, all drawn together through a uniquely convivial seating arrangement.

Oftentimes, great architecture is not complete without equally considered furniture design. A tailor-made chair can go a long way in creating harmony, establishing spatial definition, and developing a true sense of narrative in an interior. Whether that ripples throughout a purpose-built capital city or is encapsulated within a family dining room, the effect is a streamlined, heightened quotidian rhythm for those who inhabit the spaces. Architecture and furniture design are more than fine bedfellows; they rely on one another to reach their full potential. Together they stand to redefine the creative possibilities of built environments and the way that we live within them.